Aldean is one of country's biggest stars. 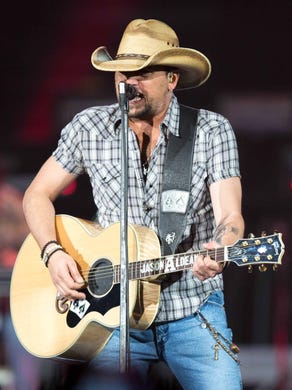 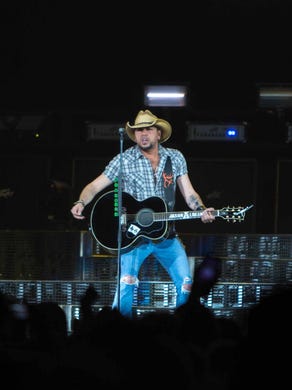 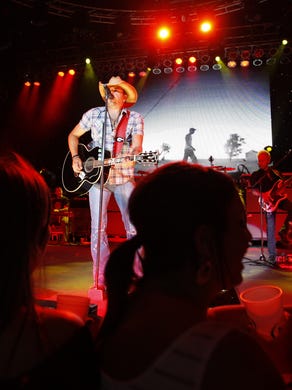 Aldean's Des Moines concert, part of his "We Were Here Tour 2016," was announced Friday. Special guests include Thomas Rhett and A Thousand Horses.

Tickets go on sale Friday, Nov. 13 at 10 a.m. and will be available at Wells Fargo Arena Box Office, online at Hy-VeeTix.com, over the phone at 844-55-HYVEE, or participating Hy-Vee outlets.

Aldean is one of country music's best draws. Some of his hit songs include "Big Green Tractor," "Don't You Wanna Stay," "Fly Over States" and "When She Says Baby."

The Nashville Tennessean published a Q&A with Aldean leading up to his February concert in the Music City:

You last played Bridgestone Arena in 2012. What can fans look forward to from your concert?

I like to think it's sort of like with each new album. With each new album you hope it gets better and that you mature a little bit and learn something that you can take to the next album. I think touring is the same way. You take things from a previous tour and you build on it and you learn from year to year. And we have a lot more hits now than we did three years ago. Just that will make the show different. I'm constantly looking for ways to make it new and exciting and fun and something people haven't seen before. That's the challenge. I know people came three years ago, and if they come back to this show, it's going to be nothing like they saw before. That's the idea. If they see it twice and it's the same thing, they're not coming back a third time.

Is it stressful always having to one-up yourself on stage?

I think that's the creative part of it. We were in a building rehearsing, and I walked past a picture on the wall and it was a picture of Lady Antebellum. I saw how their stage was and was already thinking about next year's tour. It was like, 'Hey, that's cool. What could I pull out of that that could work for us?' When it's time to start planning the tour, I pretty much have an open book to sit down and start dreaming up all these things and figure out how to make it work.

Coming off of (2010's multiplatinum-selling) 'My Kinda Party' we had all these high expectations for (2012's) 'Night Train' album. It did well, but even though it sold a million and a half copies, (it) didn't sell as much as 'My Kinda Party.' With this record, there wasn't nearly the expectations as there were for 'Night Train,' which was fun for us. It let us get back to doing things the way we always had without everybody scrambling around wondering, 'How are we going to follow this?'

I feel like we have some really cool songs yet to come off of this album. It's just one of those things where we're two singles in and we're already platinum … we're off to a good start.

There was a lot of stuff going on last year from finishing the album, to the tour, to a lot of the immediate stuff surrounding my personal life, to getting engaged. I'm looking forward to 2015 for a lot of that stuff to settle down and to focus on what I need to be focusing on, which is my career and my relationship. I want everything else to take a backseat for a while, and for all the focus not to be on negative stuff all the time. (Aldean was caught kissing his now-fiancée Brittany Kerr in a bar in 2012 while he was still married to his first wife, Jessica Ussery.) That stuff is a drag reading about it and seeing it and constantly being asked about it. I'm looking forward to putting all that stuff behind me.

Do you think you will be able to put the personal drama behind you this year?

Honestly, it feels a lot better than it ever has. I think that people see (my relationship with Brittany Kerr) is something real and legitimate. It wasn't some random crazy thing. It feels different than it ever has now, and it allows us to actually enjoy it a little bit and not walk around with our helmets on. It's been cool lately.

Lady Antebellum's Charles Kelley said that you all were headed to play a few shows overseas together soon and joked that it would be the only time Jason Aldean would open for Lady Antebellum. Are you looking forward to the tour?

I don't know that it will be the only time I open for them. This is the first time we've been over there and Lady Antebellum toured over there before, and so people are more familiar with them than us. But we're going over there for that reason — to make people aware of who we are. Not only us, but country music in general. It's going to be fun. We'll be over there for 10 days playing in Norway, Sweden, London and Ireland. We'll have a few days off to be a tourist. I'll have my fanny pack and my camera ready. It will be a good time.