The doors are open and beer is flying out of SingleSpeed Brewing Co.’s new location.

Cedar Falls Brewery SingleSpeed Brewing recently renovated the old Wonder Bread building in downtown Waterloo and is "proofing" they have what it takes to expand their 1,700 taproom to a 30,000 brewery and restaurant.

WATERLOO, Ia. — Spend an afternoon on the corner of Commercial and W. 3rd Street and longtime Cedar Valley locals will tell you that, for years, there’s been one thing missing from downtown Waterloo.

A Waterloo school teacher, Bill Dawson, remembers the sense that used to fill the void: “When you (would) go by here, it would just smell so good … You just wanted to come in here and see what they were making that night just to see if you could eat it. It permeated the air so much.”

A downtown business owner, Jessica Young, recalls the odor floating under the cracks of her doors and filling the air of her bicycle shop: “We could smell the cinnamon raisin bread. Oh my gosh, it smelled so good.”

The local councilman for the ward, Pat Morrissey, said he sometimes tries to conjure it back through his memories: “The smell of Wonder Bread being made there … that’s one of those nostalgic memories.”

Sitting on the block between W. 2nd and W. 3rd Street since 1927, the building known fondly as a longtime Wonder Bread production facility is again producing head-turning smells, its first time doing so since doors to the plant closed in 2012. Only now, the yeast and water are creating a different aroma: craft beer courtesy of Cedar Falls-born SingleSpeed Brewing Co.

Part of an expansion from the nanobrewery’s 1,700 square-foot facility in Cedar Falls to the roughly 30,000 square-foot Wonder Bread building, SingleSpeed owner Dave Morgan purchased the building from the city of Waterloo for $1 in 2015 with plans of registering it on the National Register of Historic Places while transforming the then-distraught facility into an open, welcoming beer and dining hall.

The project cost roughly $6.5 million and took place across 2016 and early 2017. Morgan's staff expanded from eight to 103 when adding a second location, opening doors in April and fulfilling the promise of returning smells to Waterloo.

“(This building’s) just a fabric of downtown Waterloo,” said Morgan, a 42-year-old Iowa native and University of Northern Iowa graduate. “People are attached to this building for what it was and what it stood for.”

Inside the roughly 500-person capacity brewpub, Morgan — with enlisted development assistance from Iowa’s Invision Architecture — worked to balance historical values of the building while designing the brewery of his dreams.

SingleSpeed head brewer Austin Myers walks out of a cooler with a bucket of hops at the brewery's new Waterloo location inside the former Wonder Bread building on Tuesday, June 27, 2017 in Waterloo. Brian Powers/The Register
Fullscreen 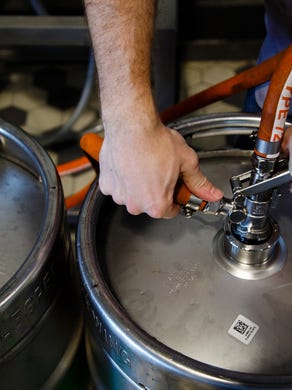 An old photo of the former Wonder Bread building which is now SingleSpeed brewing on Tuesday, June 27, 2017 in Waterloo. Brian Powers/The Register
Fullscreen More: There’s a John Lennon-themed Iowa beer coming to a tap near you

Historical nods throughout the building include a “proofing” lounge sized and located where the factory’s proofing box once stood, a lobby emulating what customers would experience in the 1950s and original flooring through multiple rooms. For an entrepreneur who pivoted from the restaurant business in 2012 for a "new challenge" in opening Cedar Falls’ first craft brewery, Morgan described opening SingleSpeed Waterloo as a cocktail of stress and gratitude.

Gratitude, he said, comes from the response shown by the community after opening: “We’ve been humbled by the support (the community’s) shown the project. … (Having people) randomly come up to me and thank me was pretty sobering.”

“The re-use of an old space is so much fun and that’s the sort of thing that people can buy into,” Buzza said.

At one point in the last half-decade, having the Wonder Bread building re-open as a brewery seemed unlikely. In 2014, Young, co-owner of Waterloo Bicycle Works and stepdaughter to council member Morrissey, founded the grassroots organization “Friends of the Waterloo Wonder Bread Building” in hopes of saving the building amid rumors of demolition.

She began raising awareness by creating postcards, to be distributed to community members and at noteworthy Waterloo locations, that donned phrases such as “Waterloo needs more preservation, not more parking,” and “new isn’t always better.” Shortly after launching the group, she began reaching out to local business owners in hopes of connecting with one who could find use of the space.

“I could (tell) where a person who didn’t have a vision couldn't see that it could be something more or different,” Young said. “It definitely needed some work.” 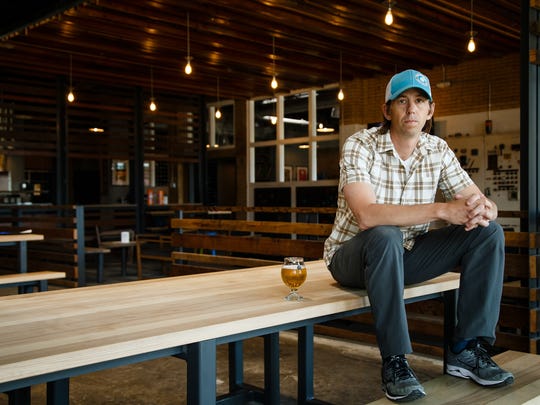 Among the handful of calls and messages, Young and Morgan connected. Walking through the building for the first time, he recalled the moment as intimidating.

“It was filled with stuff still,” Morgan recalled. “It was tough to comprehend what I was walking into that day.”

More:Here are the new breweries opening in Iowa this year

Despite being littered with unused factory equipment, Morgan and the SingleSpeed team began creating a business plan for what would eventually secure the building from the city. In hindsight, Young said she looks at the experience as a confidence builder.

“I just didn’t want the building gone,” Young said. “(Seeing the building now) makes you realize you can make a difference and you can change things if you get involved.”

Inside the new SingleSpeed

Between the walls of the present-day Wonder Bread building, beer and food lovers sit at communal tables made of ash, along the bar facing the open kitchen anchored by a wood fire oven or in the cozy proofing lounge. Food options are influenced by what can be organic and locally sourced, Morgan said. Salad options include a strawberry spinach and orange agave; appetizers feature the “wonder”ful cinnamon bread and “fancy pants” fries; flatbreads, burgers and entrees (including a chicken and waffles plate) round out the offerings.

The community tables, Morgan explained, are a way for strangers to connect over a pint of local beer.

“Community’s a powerful word in general,” he said. “I think what we’re finding by having a seating arrangement such as this, we’ll be able to build and strengthen some friendships by having discussions over ale.”

More: How Confluence Brewing created one of Iowa’s favorite beers

The aesthetics have garnered eye-opening responses, like that from Dawson, who has visited SingleSpeed Waterloo five times since April. Additionally, the space has been certified a leader in energy and environmental design by the United States Green Building Council.

“I was blown away. Blown away by what they’ve done,” Dawson said. “I can’t believe how big it was. The openness of it.”

When limited to the Cedar Falls brewery, SingleSpeed was producing about 400 barrels of beer annually; the team is aiming to deliver 4,000 barrels in 2017 with eyes on 8,000 in 2018. More space allows more room for experimentation and one-off brews, including the anticipated “Wonder Beer” series, a run of beers giving nod to the room in which each is served.

“Very few beers that we brew here do we intend to be consumed within this space but the Wonder (beer) series we do,” Morgan said.