Marcus Theatres, with locations in eastern Iowa, among first movie theaters to reopen

Marcus Theaters is among the first chains to reopen its theaters as Hollywood releases "Unhinged," "New Mutants" in search of a comeback.

Marcus Theatres, with locations in eastern Iowa, among first movie theaters to reopen

"The Dark Night of the Soul" is a point in a narrative often punctuating a film's second act: prospects are grim, all is lost and victory has only the faintest glimmer of possibility.

All that's left for the characters to do is pick a means of moving forward and attempt to emerge from the darkness.

On Friday, the Wisconsin-based Marcus Theatres hoped to begin its climb out of the metaphorical abyss toward apotheosis as movie theaters across the country begin to reopen after months of closure.

"It has been a rollercoaster ride," Mari Randa, director of marketing, communications and studio relations for Marcus Theatres, told the Press-Citizen last week. "We announced in late-June that we were going to implement a phased reopening process."

Six Marcus Theater locations reopened on June 19, including Marcus Ridge, Renaissance, BistroPlex and Valley Grand Cinemas in Wisconsin; Majestic Cinema of Omaha in Nebraska; and the Roswell Movie Tavern in Georgia, according to the company's June 11 release.

This weekend, that phased reopening expanded to the Coral Ridge Cinema in Coralville and the Crossroads Cinema in Waterloo. This week, the Cedar Rapids Cinema is scheduled to open. Iowa City's Sycamore Cinema and Cedar Falls' College Square Cinema have not yet announced reopening dates.

Leading up to and since those half dozen locations opened on June 19, Marcus Theatres has continued to articulate safety protocol.

"We spent a lot of time in the planning phases and thinking about what protocols we would make sense at the theatres," said Randa, who assured reopenings will comply with both CDC and local guidelines. "Safety is for sure the priority for our guests and our associates."

Currently, the phased rollout is projected up to the release of Christopher Nolan's most recent project, "Tenet," which is scheduled to release on Labor Day weekend. Randa said roughly 80% of Marcus Theatre's 91 locations should be open by then. 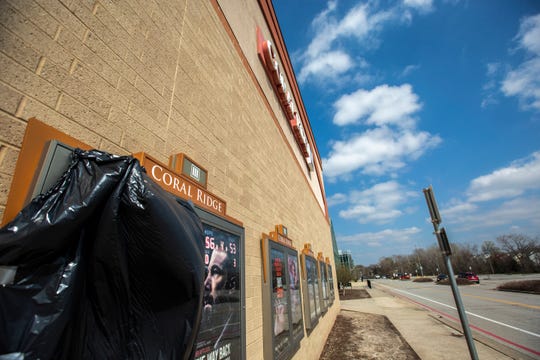 A trash bag covers a movie poster display at a Marcus Theatre, Tuesday, April 7, 2020, at Coral Ridge Mall in Coralville, Iowa. Malls across the state were ordered to close by Iowa Gov. Kim Reynolds to combat the spread of COVID-19. (Photo: Joseph Cress/Iowa City Press-Citizen)

As with most spaces, the return to movie theaters will look different as precautions are implemented in an attempt to stem the potential spread of COVID-19 at those venues.

The most striking immediate change will be the plexiglass barriers "located at various transactional areas," along with other measures in place, to reduce physical contact at those points. Furthermore, hand sanitizer will be available throughout the building.

When audiences go to their auditorium seats, a removable piece of tape should denote the clean status of the chair before they sit. Furthermore, the frequency of theater cleanings has increased and socially distanced seating has been implemented.

"We’re using what we call a checkerboard pattern — two seats on, two seats off in row one — then two seats off and two seats on in the second row — so on and so forth," Randa described. "This approach provides guests their space as they settle in to watch a movie."

A list of more theater precautions is available on Marcus Theatres' website, but Randa emphasized that theater policy across the board says "it’s masks required unless eating or drinking."

Regular attendees of any Marcus Theatre location will also know one of the hallmarks of the chain is a short intro played before each film. The advisories tend to be less than a minute long and feature Greg Marcus — President & CEO of the Marcus Corporation — speaking to the camera.

"I can’t speak to the content of it, but I know there’s a new ad filmed featuring Greg Marcus,” Randa said.

Marcus Theatres are not the only ones trying to navigate reopening. In Iowa City, FilmScene has already gone through some scrapped reopening plans. It remains unclear when the non-profit theater will ultimately reopen its doors again for regular screenings.

"Here in Johnson County, cases remain elevated," a statement attached to a survey sent to FilmScene patrons regarding the venue's eventual opening read. "Our community, still reeling from the effects of a severe storm, is now bracing for the return of university students and the start of public schools — it simply is not the right time to open theaters to the public."

Meanwhile, Des Moines' Flix Brewhouse plans to open on Thursday — one of four of the Texas-based company's locations opening concurrently that day. (The others being in Texas in the cities of Round Rock, Frisco/Little Elm and San Antonio.)

According to Greg Johnson, the director of sales and marketing for FlixBrewhouse, the main motivation for waiting another week after Marcus Theatres' opening is the new movies being released Thursday onward — specifically "New Mutants" and "Tenet."

"There were also many other factors, including our teams' bandwidth to be completely prepared to execute not only the protocols we have agreed to through the National Association of Theater Owners, which we are a member, but also the additional safety standards and enhancements we have undertaken over and above the NATO protocols," Johnson wrote to the Press-Citizen via e-mail.

"At the end of the day ... we felt waiting until (Thursday) puts us in the best position to do that in a safe, sustainable manner," Johnson wrote.

Movie theaters' approaches have been a motley stutter-step in part because Hollywood executives continue to measure and readjust its course.

"It’s excitement tempered by terror," Mark Gill, the CEO of Solstice Studios, told the Press-Citizen over the phone Friday, just as Coral Ridge Cinema audiences completed that location's premiere screening. "On the one hand, it’s exciting to work this hard and finally get to this day; on the other hand, no one knows what’s going happen."

The film is a psychological thriller about Rachel (Caren Pistorius) who, in her hurry to get to work, is rude to another driver, played by Crowe. Offended, Crowe's character pursues Rachel single-mindedly through the film's run time.

For months, Christopher Nolan's "Tenet" was singled out as Hollywood's return to theaters. Now that the flick has been pushed back to Sept. 3, "Unhinged" will dominate the marquee for at least a week. After that, it will have to compete with the oft-delayed "New Mutants" — originally scheduled for an April 13, 2018, release — now set for Thursday.

"Unhinged" was itself subject to schedule shake-ups in that period. At one point, the movie was planned to release on Sept. 4, but when "A Quiet Place Part II" adjusted its release to that same date, Solstice didn't want to try and compete with it. Looking at the release calendar, Solstice staff saw that — at that point — the back half of 2020 was filled with too many big releases, so they decided to look higher up on the calendar.

Gill said he never considered releasing the film on streaming platforms at any point during the past few months — partly because keeping the theatrical release here in the U.S. made it more enticing to theaters in foreign markets.

Because of that insistence — Gill and his team were able to orient "Unhinged"s release around "Tenet," leading to this week, in which "Unhinged" will be the dominating name across the marquees of the theaters that have gone ahead with reopenings in the U.S. 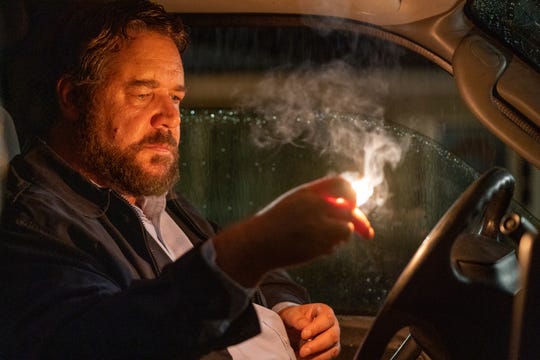 It's unclear how COVID-19 will affect "Unhinged" at the box office. The movie has a modest budget — below $50 million — but unlike most releases in the past, how well it does likely won't be massively apparent in its opening weekend.

Gill hypothesizes that people are tired enough of being at home and eager enough for a distraction from the pandemic that there will be a healthy interest in going to see theater films. Yet, as has been the case with so much this year, the future remains uncertain.

"There's no way to know, and there’s nothing to do but hold your breath."