As the COVID-19 pandemic has continued, some of the area's theaters have turned to local playwrights for new material. 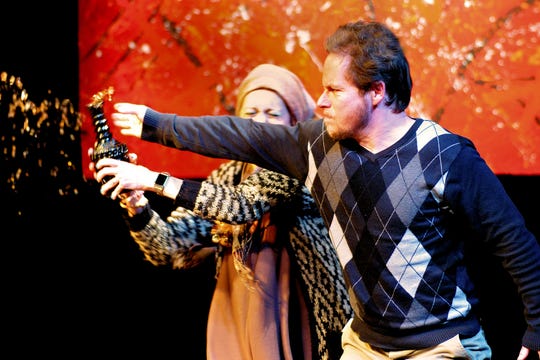 One of the less-contemplated aspects of community theater is properly gaining the rights to perform a given piece of theater.

In the age of COVID-19, this is exacerbated further as different rights are often needed to stream a production over the internet than would be needed to simply perform it live.

One way around this new age of rights management, however, is original theater.

Though the University of Iowa stages dozens of new plays in a typical year — and is not lacking this year — local theaters seem to be experiencing an uptick in notable original productions and scripts.

Riverside Theatre recently resurrected its Walking the Wire series, Iowa City Community Theatre has a brand new script streaming this weekend and Dreamwell Theatre has devised a way to share a new play every month starting this December and extending far beyond.

At the start of the month, Iowa City's Dreamwell Theatre put out a call to area playwrights of any skill level for its new podcast, "The House is Open."

"Dreamwell Theatre is looking for new full-length plays [60-90 minutes] by local writers for a theatre podcast," a social media post read. "Send us your plays! We will read them! Send scripts to plays@dreamwell.com. If you have any questions, feel free to shoot an email to cdmattox77@gmail.com."

If Colin Mattox has his way, the offer — as well as episodes of the podcast — will extend on for a long while.

At the start of the pandemic, Mattox joked with friends that now was a great time to start a podcast. While the podcast he'd joked about hasn't come to fruition yet, the Dreamwell project has.

“As a writer, I’m always trying to edit my stuff and get the best, to do that it helps me have the play be read by actors," Mattox said of bringing the idea to Dreamwell. "With a few notable exceptions in the area, there’s not a lot of platforms for playwrights — (live theater) is a very specific medium if that’s what you write for.”

Having worked with Dreamwell in the past, Mattox brought the idea to the theatre and it came just as the theater was looking for fresh programming in the pandemic's wake.

“It was perfect timing, actually, because we were trying to find another point of interest for all of us, as a board," Madonna Smith, the theatre's director, told the Press-Citizen. "This really fits in with what we’re trying to do — this gives playwrights the opportunity to have their work showcased in some way."

The two plan to tag area actors and directors to work on each project, as well, albeit on a reduced time table compared to a full, live production. The hope is that even those who possess a more passing interest in theater will have the opportunity to try it out for a week. It also sates those who have been longing for performance over the past few months.

The podcast's first episode is slated to be released sometime in early December. With a monthly release schedule, each episode will feature a new play and an accompanying talkback where playwright, cast and crew talk about the productions.

The first piece, titled "Bigfoot Takes a Walk," comes from UI student Liv Schnieder. The production follows the titular cryptid attempting to adjust to human society and capturing society's reactions to it.

“This really fits in with what we’re trying to do — this gives playwrights the opportunity to have their work showcased in some way.”

"It's a really beautiful piece, I think ... It's a lot about taking time to be with one's self," Mattox said. "It's very darkly comedic, at times, and very sweet."

The plan is for "The House is Open" to be available on a variety of podcasting platforms, from Sticher to iTunes, as will its coinciding talkback series, "Talking Back," hosted by Smith and Melissa Kaska, the Dreamwell Theatre board's secretary.

“I would like to do it for as long as it’s possible and, what I hope it would look like, going forward, is that we have a pretty steady replenishing pool of scripts to pick from," Mattox added. "I want to have an avalanche of local new plays and want to pick the best of the bunch and give a platform to those writers.” 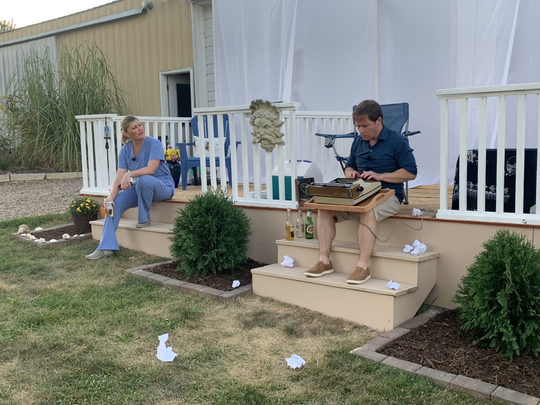 Nicole DeSalle and Jocko Motyko in Trent Yoder's backyard performing a play of DeSalle's creation, "Oscar." Though originally written, staged and recorded over the Spring/summer of 2020, the show will be streamed as part of Iowa City Community Theatre's season in light of the COVID-19 pandemic. (Photo: Special to the Press-Citizen/Photo by Sam Yoder)

At the start of the year, no one knew that "Oscar" was coming — not the four characters who find their lives interrupted, nor playwright Nicole DeSalle, who conjured the story and its instigating action.

DeSalle and her three co-stars appeared earlier this year in Iowa City Community Theatre's production of "God of Carnage." The four enjoyed working together so much that they'd hoped to perform together again — hopes that persisted even as the pandemic found its way to eastern Iowa.

“We kept looking for a play that would kind of fit that — that had four actors and we could stage socially distanced — and we just couldn’t find it," DeSalle recalled. "Finally, someone said, kind of as a joke, ‘Nicole, why don’t you write a play?’ So I did.”

"Oscar," a play born out of the need to perform during a pandemic, follows a group of neighbors. The four are called to their porches when a strange object — dubbed "Oscar" by the characters — appears in the sky and changes their lives forever. 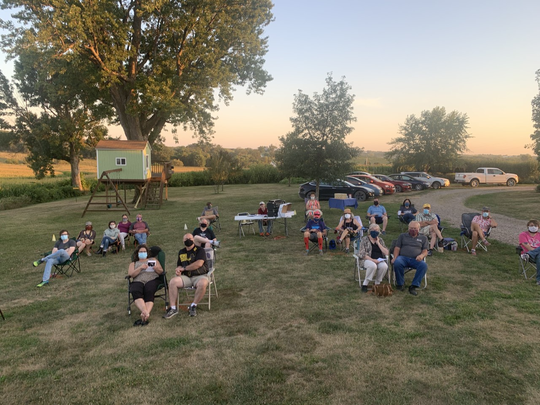 A socially distanced audience members gather in socially distanced "camps" in Trent Yoder's backyard during the summer of 2020 to watch "Oscar." Yoder directed the production and built the set for the show. Audience “camps” could be one to four people, spaced 10 feet apart. Masks were required. (Photo: Special to the Press-Citizen/Photo by Trent Yoder)

Trent Yoder, the play's director, built a set in his backyard in Kalona. Over the course of four days in August, the makeshift company invited friends and family to attend performances in limited, socially distanced pods (what DeSalle and Yoder referred to as "camps").

The play ran over the course of four days and was only recorded as a memento for the cast. However, when Iowa City Community Theatre reached out to the community with its digital platform shortly after "Oscar" wrapped, the stars had seemed to align.

"When we originally did this, we never intended it to go anywhere beyond that," Yoder said. "It was just by chance that Iowa City Community Theatre (asked for pitches). We thought, ‘Hey, we’ve got this in the can already, you can have it.’”

Half a year since "Oscar" was written and months after it was first staged, COVID-19 is more widespread than ever. As such, Yoder and DeSalle have tentative plans to produce at least one more new play.

"I'm sure we'll probably be doing some type of social distancing (performance) in the spring," said Yoder, who has a play of his own in progress. "Even if (the pandemic's behind us by then), I'm happy to do something like this.

"This was just extra special because, at that point, nobody was doing anything," Yoder added. "We did it and it was totally safe. When we stepped on the stage, I think it was incredibly special for us to think 'we're really doing this'."

"Oscar" will be streaming this weekend, at 7:30 p.m. Friday and Saturday and at 2 p.m. on Sunday. Tickets are available online. The show will include a talkback with audience members also recorded from the summer.