Krunkwich had a line out the door as soon as it opened, but the restaurant's first day was not without hiccups.

An hour before the much-anticipated Krunkwich Ramen House was scheduled to open, cars lined the normally sleepy Des Moines street. Excited passengers lingered, listening to music or chatting with friends as they waited for their chance to have a steaming hot bowl of soup from the city's first ramen-focused restaurant.

Inside, chef and owner Sam Auen was calm, though obviously a bit stressed: "I've opened a restaurant basically every year and it never gets easier," he said while devising a plan to make an ingredient that hadn't arrived the night before.

With minutes to go, Auen, who also owns Tacopocalypse, snapped a first-day photo and selected the inaugural song — "Get Ur Freak On" by Missy Elliott — before he opened the door and a mass of people flooded in.

From its first moments, Krunkwich had a line out the door. 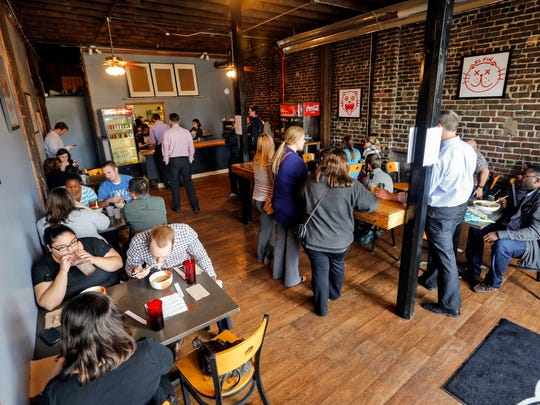 But the restaurant's opening day was not without hiccups. At 1 p.m., two hours shy of the posted closing time, the shop ran out of noodles. A half hour later, most everything else in the kitchen was gone.

"How does a ramen place run out of ramen?" one customer asked incredulously under his breath while walking away.

Diners seemed split on the menu, which included eight kinds of ramen and a few other dishes. Most who came in the morning enjoyed their food, while those who came later seemed disappointed.

"I was excited about ramen coming to Des Moines, really excited," she said, estimating she's had 10 different bowls of ramen. "I figured it would be good and that it might bring more ramen places to the area."

But "my noodles were overcooked," she explained. "The meat was OK, but it didn't (impress). The broth was slightly warmer than room temperature. I don't think I will come back in a week or a month, but maybe when he gets his bearings — maybe."

The Seoul Food and The Gringo. (Photo: Zach Boyden-Holmes/The Register)

Auen was disappointed, too. He worked on this concept for nine months, though he acknowledged that a lot got in the way of focusing solely on Krunkwich.

"We had some noodle issues, and we're going to close tomorrow to work those out," he said. "I won't serve the noodles we made today again. They weren't up to my standards."

Still, Auen doesn't have any regrets about launching Wednesday: "The amount of people who came to my restaurant's opening was really meaningful. I love Des Moines and I'm happy that Des Moines loves me. I want to make sure this isn't the thing that kills that love. I will fix this."

Krunkwich only enhanced Jillsa Aringdale's affection for Auen's food. The 26-year-old and her two colleagues were the first people in line Wednesday. They spent their morning planning their trip from West Des Moines and plotting what each one would get, they said.

“Tacopocalypse is awesome, and the food there is so different.”

"Tacopocalypse is awesome, and the food there is so different," Aringdale said. "They have such a wide variety that I had to check his new place out. It feels especially important to me because I am getting ready to move to Colorado. This was somewhere I had to come before I left Des Moines."

After slurping their bowls clean, the trio grinned, each commenting they had that "I can't believe I ate the whole thing" full feeling.

"The food is just fun, and it makes me happy," Aringdale said. "It's spring, things are coming alive and Krunkwich is on a new adventure, just like I'm about to be on a new adventure. My co-workers took me out to mark my final week and (she looks at them) this was a good pick."

Then, they headed toward their car, stopping to take a group photo in front of the Krunkwich sign as a memento.

After all, sometimes there's more to a restaurant than the food.