It's a culinary variety show for the whole family.

TV personality and chef, Alton Brown, has built a career around his quirky genius. He explains his thought process for some of his food pairings and experiments. (Nov. 18)

Alton Brown, coming to Des Moines on May 6, 2017 as part of his 'Eat Your Science Tour.'(Photo: Courtesy Alton Brown Live/Special to The Register)

Prepare your appetite for some science, Iowa. Alton Brown is coming to town.

Brown, a Food Network television personality and best-selling, James Beard award-winning cookbook author, has created a new form of entertainment — a live culinary variety show. His second leg of the "ALTON BROWN LIVE: Eat Your Science" tour will perform in Des Moines on May 6 at 7:30 p.m. at the Des Moines Civic Center. The first leg of this 40-city tour sold over 100,000 tickets.

It's a completely revamped version of his last sold-out show, "The Evitable Inevitable Tour," from 2013, which played in over 100 cities. Fans of Alton Brown can give him suggestions on where to eat when he's in town by using the Twitter and Facebook hashtag #ABRoadEatsDSM.

After directing TV commercials for a living, Brown went to culinary school. He set about transforming the way cooking programs are produced, and starred in his own widely-recognized shows like "Good Eats," "Iron Chef America," "Feasting on Asphalt/Waves," "Food Network Star," and "Cutthroat Kitchen." They can be seen on Food Network and online, and he's currently the chairman in "Iron Chef Gauntlet."

Fans and critics alike have praised his interactive live shows for their innovative and spectacular food demonstrations. This will be his first stop back in Des Moines in two years.

We sat down with Alton Brown to get a glimpse of what to expect from the show and how it came to be.

Q: Without giving too much away, what can audiences expect from your show?

A: What I do is a form of a show called a "culinary variety show." There are some very large and very strange food demonstrations. 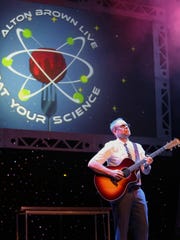 Alton Brown performs at his show, 'Eat Your Science.' (Photo: Sarah De Heer/Special to The Register)

Q: Where are some of the spots you've dined in Des Moines?

A: OK, you have to understand that my favorite restaurant in the world is in Des Moines. I discovered it the last time I was there, and I will be back this time. I will be at Fong's Pizza. Fong's Pizza is the best, which I discovered when I was touring there before. I ate there and I ate at a couple of other little places around town. But Fong's Pizza is absolutely up there, and I can only hope that they'll be reserving a spot to eat for me, as well as a jet fighter helmet for me to wear while I am drinking my kamikaze.

Q: How will your show resonate with people who are into the local food movement?

A: I will applaud it and I will make fun of it at the same time. If I hear one more waiter tell me that a restaurant is farm-to-table, I'm probably just going to bang my head against the table. I think that eating local food is one of the great joys of life. It's a great way to celebrate community. But it's also a marketing tool that can be overused and abused, so anytime that I find a trend that's positive, I'll find a way to make fun of it at the same time. That's just who I am. But I support it wholeheartedly and what's interesting is that there are so many cities where the restaurant scene has been beginning to thrive because of the relationship with farms and local farmers. That's very much an early 21st-century trend, I think. It used to be that restaurants could generate farms. Now, farms are generating restaurants.

Alton Brown performs at 'Eat Your Science.' (Photo: Lamar Owen/Special to The Register)

Q: You're giving people the chance to choose places for you to visit in each town where you're performing by using a Twitter and Facebook hashtag. Tell us about that.

A: #ABRoadEatsDSM. Here's the thing: if I tour a show, it would be very easy to have every day be exactly the same, and I wouldn't remember anything. I wouldn't remember the theaters because they all start to look the same after a while — except for the Fox Theater in Detroit. Nothing looks like that. But if you can really form a relationship and community through food, then what you remember every day when the tour is long over is the food. I can't tell you what the inside of the theater looks like in Des Moines, but I do remember Fong's Pizza.

Q: What were some of your favorite #ABRoadEats suggestions in the country?

A: Oh, gosh. I'd have to go back to my website and look them up. There's too many. They're in every city in the United States — Espresso To Go Go in Wichita, Kansas; Eventide Oyster Bar (Co.) in Portland, Maine; Sidecar Doughnuts (& Coffee) in Costa Mesa, Calif. 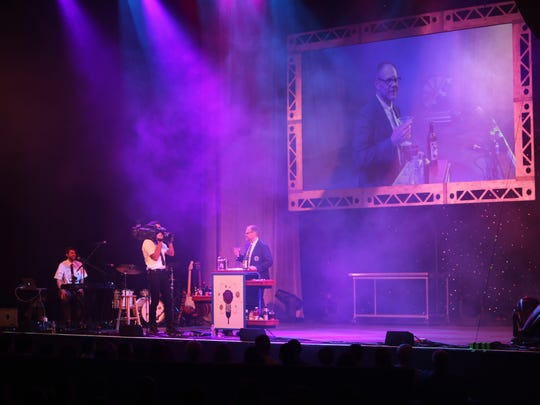 Alton Brown performs at his 'Eat Your Science' show. (Photo: Lamar Owen/Special to The Register)

Q: Your shows are a unique blend of science, instruction, culinary technique, and humorous antics. What was the defining moment when you realized you had an audience who would “eat up” that combination?

The funny thing is that there's no entertainment like a live, theatrical show. It's a very, very different kind of thing, and it's very much based on a group dynamic — the feel of an audience and the relationship between the audience and the people on the stage. Well, food is also connective tissue. It's very much something that brings people together. So by putting those two things together, it's just kind of a double-positive. 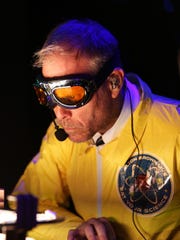 Alton Brown performs at his 'Eat Your Science' show. (Photo: Sarah De Heer/Special to The Register)

Q: "Cutthroat Kitchen" has been a huge hit on Food Network. How do you come up with the ideas behind the sabotages?

A: There are about seven of us that are involved in that. I couldn't possibly do that by myself. There are multiple producers; there's me, and several culinary people. And it's really complicated because not only do we have to test them to make sure they are all doable, but we also have to make sure that they are doable in combination with other sabotages, so if somebody got two, they'd still be able to cook their way out of it if they put their head to it. I did 200 episodes. Our final 20 episodes that we made will be coming out this year.

Q: When you're not traveling across the country teaching people new and interesting ways to "eat their science," what can you be found doing?

A: Well, I'm working on the digital offspring of my show, "Good Eats." I'm going to start making a show like that again, online-only. Not for television. That's taking up a good bit of my time developing that right now.

Q: What's the craziest thing you've experienced in your years in the food show business?

A: Getting home in time for dinner.