"One day, I got offered a gig with Jay-Z and Justin Timberlake and I turned it down and the next day, I went to culinary school."

Clyde's Fine Diner, which opened Oct. 16 and is located in the new building at 111 East Grand Ave., serves a variety of appetizers, soups and salads, sandwiches, entrees and desserts.

Owned by chef Chris Hoffmann, 41, the 78-seat restaurant pays homage to Hoffmann's grandfather, a major culinary influence in his life. 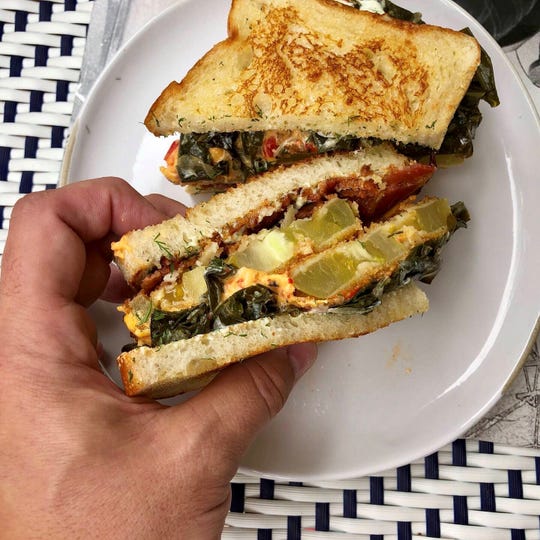 "Clyde is my grandfather on my mother's side," Hoffmann said. "He was originally from Valdosta, Georgia, and he was a big, big foodie. My earliest memories of cooking are being in the kitchen with him. Every single morning, he would cook biscuits, sausage and eggs. He loved breakfast. He was amazing."

Hoffmann said back in the days before online ordering, his grandfather would send money to his favorite company in Georgia for his favorite milled grits. "He was already sourcing ingredients around the country," Hoffmann said.

Many of the design elements in the restaurant such as branding were inspired by Clyde's doodles Hoffmann kept over the years. 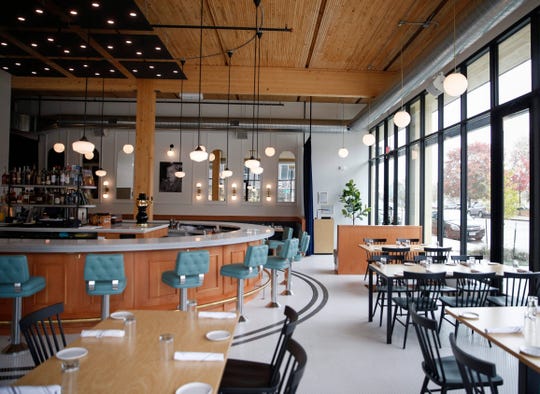 "He was what was called an 'in-betweener' on the Popeye cartoon," Hoffmann said. "The main artist would draw a cell and then he would draw the ones in between to smooth out the transition."

A neon sign in the space was inspired by a comic strip Clyde wrote for a G.I. newspaper when he was stationed in San Juan, Puerto Rico.

Anna Squier of Modern Studio and architect Jeff Rains of Rains Architecture partnered to make the 2,500-square-foot restaurant into a stunning addition to the Des Moines foodscape. 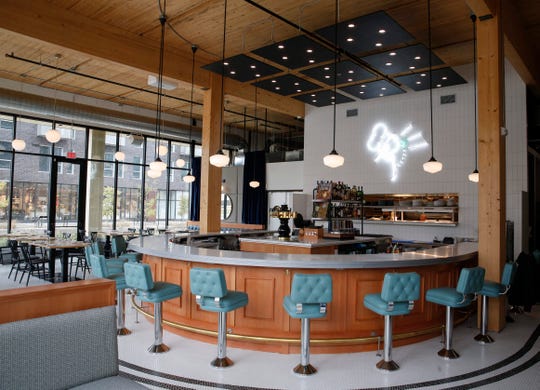 "We wanted to reflect the building that it's in, because it's a beautiful building with the architectural quality of the (cross-laminated) timber and to try and create a place that is classic and timeless," Squier said. "It's kind of an older school diner feel. There are notions that you see at a classic diner in there but with a modern take."

Squier said she wanted to bring a touch of Chicago to the space. Another main design focus was the bar area with comfortable seating and views of the pass-through area of the open kitchen.

"I think the blues and teal really resonated with (Hoffmann's) brand," Squier said. "It was a little more casual and playful and they went with the black and white really well. It's a nice contrast." 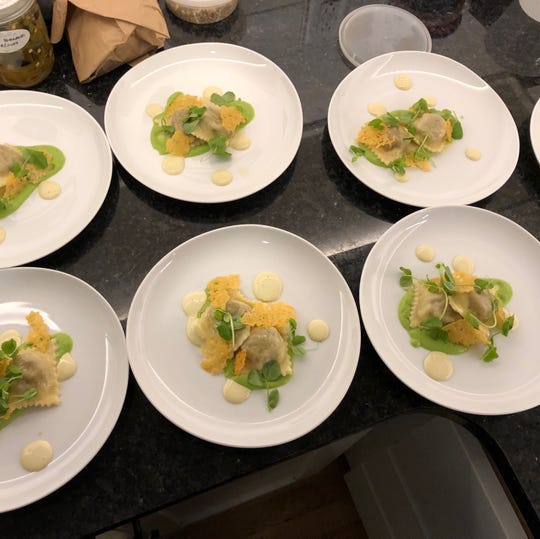 "Tuna Noodle Ravioli" at Clyde's Fine Diner. The dish is a play off of tuna casserole. (Photo: Special to the Register)

The menu is full of recognizable and approachable dishes with creative presentations and cultural influences. Vegetarian and vegan options also are available.

"I come from a more upscale fine dining background, and I am using that traditional technique to elevate comfort food and things I really enjoy cooking," Hoffmann said. "This menu is reflective of how I like eating at home and how I like to feed my family."

Sous chef Tom Kelly, 30, also moved with his family to Des Moines from Chicago to help with the restaurant. Kelly and Hoffmann met in culinary school seven years ago. 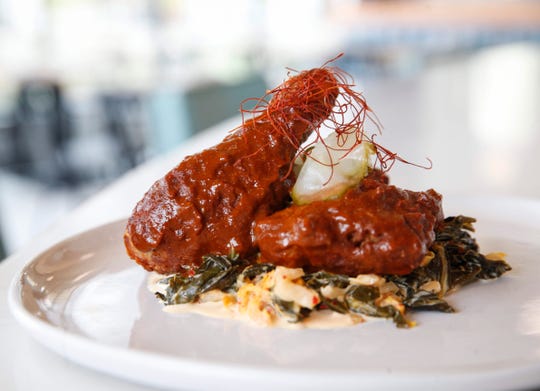 French fries are made from scratch using a method that took Hoffmann years to perfect. And the bread for all of the menu items is made in-house like the potato bun for the CFD Burger with a house burger sauce, American cheese, shaved onion and pickles ($12).

"The vision for this place has been 'everything from scratch,'" Hoffmann said. "Everything is done the hard way, basically, but the hard way yields some delicious results."

Here are a few of Hoffmann's highlights: 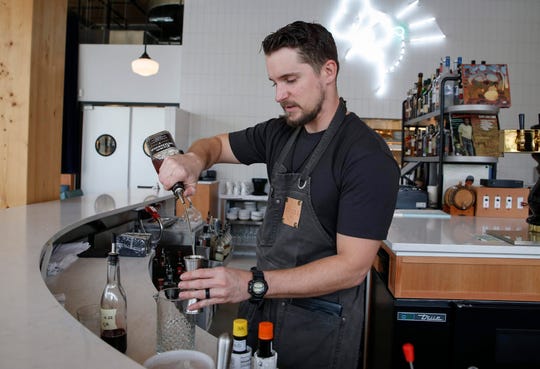 Desserts include soft-serve ice cream with a choice of toppings ($4; toppings, $1 each) and a brownie sundae with hot fudge, whipped cream, nuts and a cherry ($8).

C.J. Ryherd, formerly of Django, is heading the dining room and bar, putting his spin on the beverage program that includes seasonal cocktails

"The cocktails we do have a lot of ingredients with more complex flavors," Ryherd said. "It's a nice balance of bold flavors, variety and a little something for everybody."

Ryherd is currently working on a barrel-aged bitters recipe for the restaurant flavored with cherry bark, cinnamon and almond. 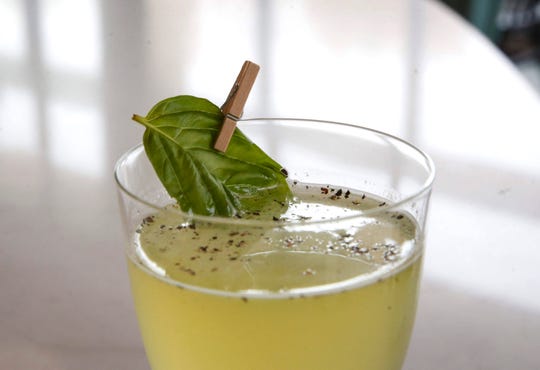 How Clyde's came to be 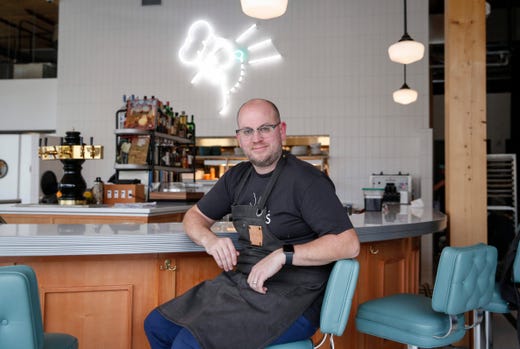 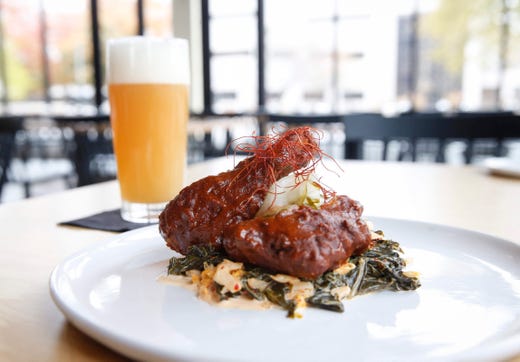 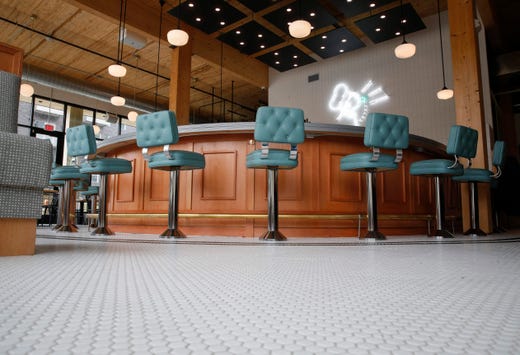 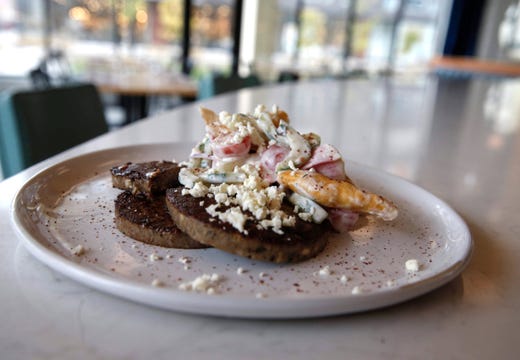 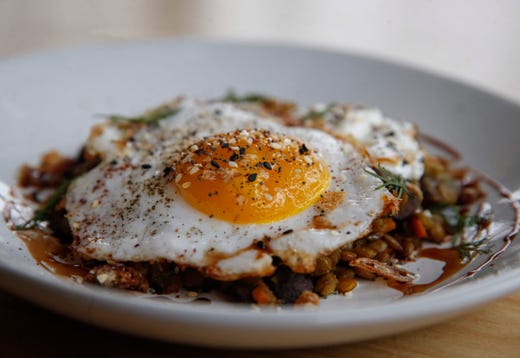 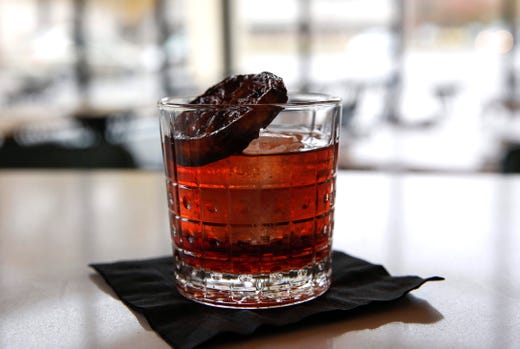 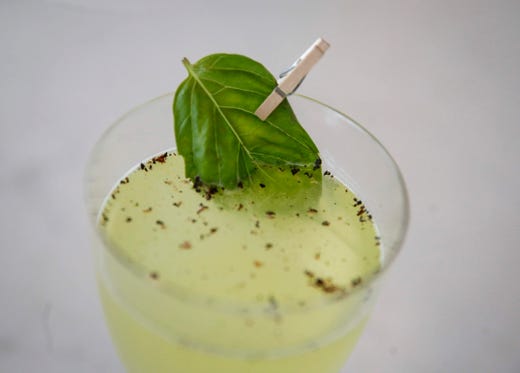 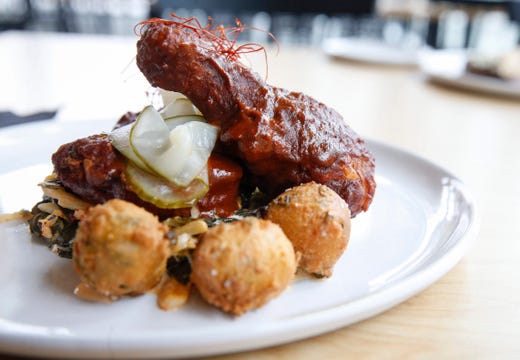 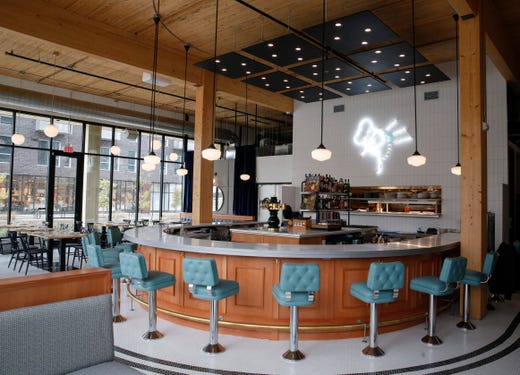 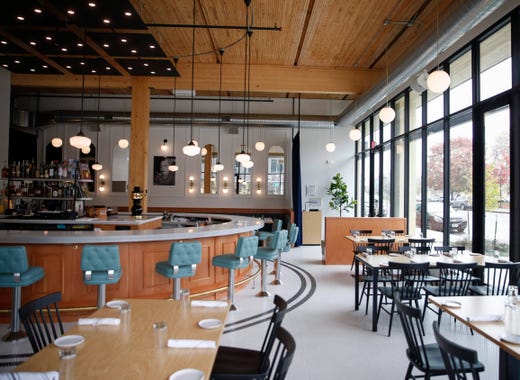 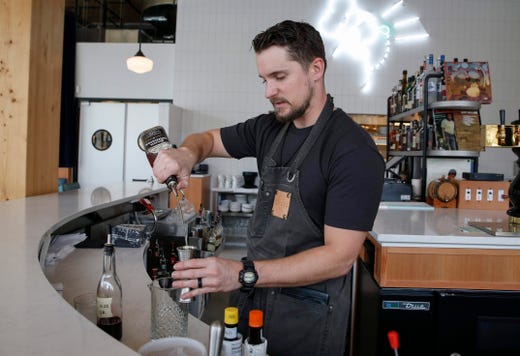 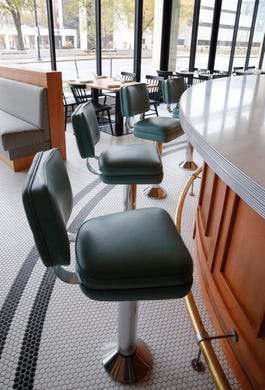 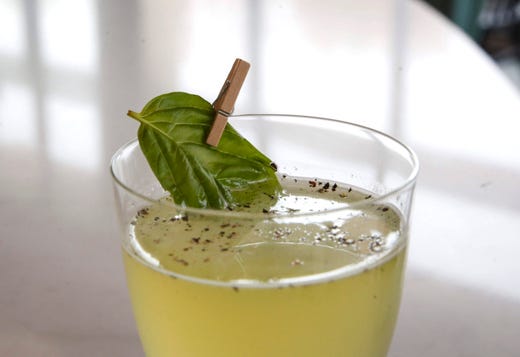 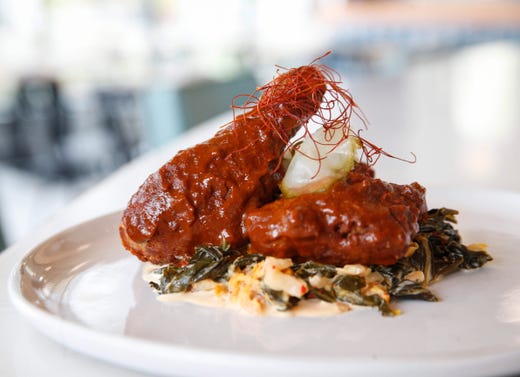 Hoffmann grew up in Ames and spent 18 years in Chicago as a touring live sound engineer for such acts as the Rolling Stones, Wilco and many others.

But about eight years ago, he switched gears and started cooking. "While traveling the world, I got to eat in some of the best restaurants around," Hoffmann said.

Wherever the tour stopped, he would eat his way around the city or devour cooking media. And when he got back home to Chicago, he would create dishes on his own using local ingredients. 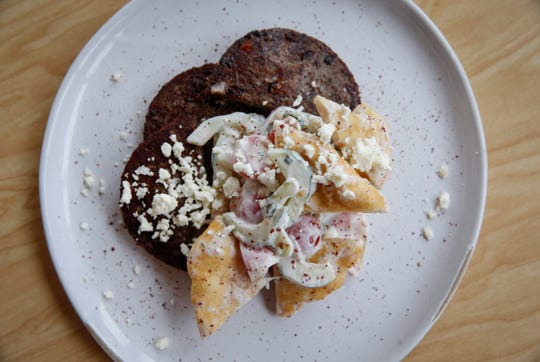 After he got married and his wife, Shannon Jencks, 41, a native of Canton, Ohio, was promoted at her job, Hoffmann saw his chance to become a chef and own his own business. "One day, I got offered a gig with Jay-Z and Justin Timberlake and I turned it down and the next day, I went to culinary school."

After graduating from the Art Institute of Chicago, Hoffmann worked his way around restaurants in the city like Vistro under James Beard Award-nominated chef Paul Virant. Hoffmann even ran a food truck. 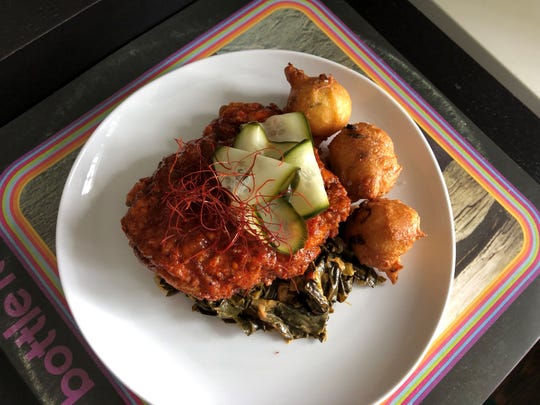 Hoffmann and Jencks live in Des Moines with their two children. In fact, one of their children was born on Oct. 18 — on Friday of the restaurant's opening week.

Takeout is available and lunch service will begin in about a month. The restaurant employs 17 people. 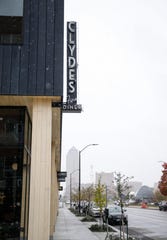