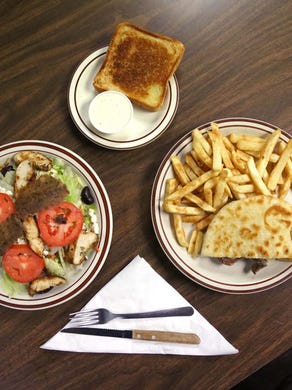 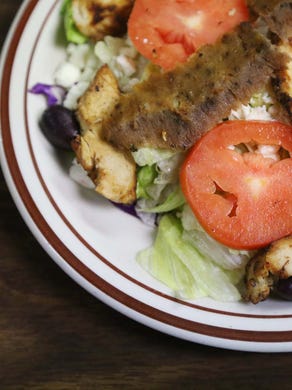 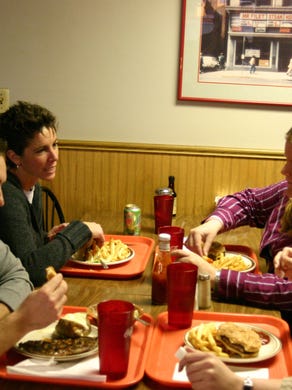 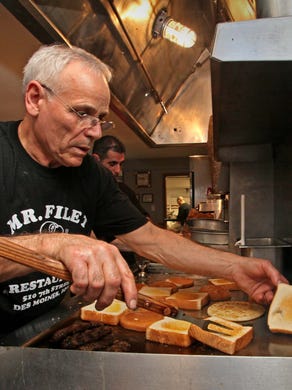 The McGreek (.60), an English muffin, egg, cheese and your choice of ham, sausage or bacon at Mr. Filet Steakhouse. Register file photo
Fullscreen

Don't look past this favorite lunch time dining spot in the morning. Mr. Filet downtown serves steak and eggs with a side of hashbrowns in the mornings. Register file photo
Fullscreen

George Hatzigiannakis stand up on the street as he watches Des Moines Firefighters investigate the fire that took his restaurant. "43 years up in smoke",Hatzigiannakissaid. Register file photo
Fullscreen

Mary and George Hatzigiannakis get an up close look at the damage that destroyed their business they have had for 43 years. Register file photo
Fullscreen

This is their 40th year in business. George Hatzigiannakis, right, of Mr. Filet Steakhouse , takes orders from behind the counter as he grills. Register file photo
Fullscreen

George Hatzigiannakis, left, of Mr. Filet Steakhouse , takes orders from behind the counter as he grills. Register file photo
Fullscreen

Mary and George Hatzigiannakis, of Mr. Filet Steakhouse. This is their 40th year in business. Register file photo
Fullscreen

Mr. Filet’s menu is a yellowed alphabet sign overhead and you take your own food to a table on a small plastic tray.(Photo: Kelsey Kremer/The Register)Buy Photo

Out for lunch on Friday, I was thrilled to find myself at the end of a long line.

Sure, normally I hate lines just like everyone else, but this time was different. This time, I was at Mr. Filet.

You see, this cozy luncheonette is a downtown Des Moines favorite that is unfortunately scheduled to close its doors for good on Aug. 14, and I have been one of several voices lamenting the loss. I suspected that at least a few of the people there that day had heard us, and shuffling along with these mourners for a last meal felt like an act of solidarity.

The restaurant is fascinating. It's decades old, for starters, having opened in 1967. Several years later, George Hatzigiannakis moved from Greece and became the owner. He's been running it ever since. The restaurant has survived a fire and several moves.

I also think it's cool that the place is somewhat hidden, like a secret rendezvous. The current location is a nook on 7th between High Street and Grand Avenue directly under an old parking garage. Being slightly below street level, this eatery can be hard to spot from a car, neon-signs notwithstanding.

What I love most about Mr. Filet is that it is a hold-over from the cafeteria-style restaurant era and in particular that it is a Greek steakhouse. There used to be a lot more of these but they have largely disappeared as tableside-service restaurants became more popular.

But Mr. Filet is different. It has a cohort of fans who come for the food but also because they like George, who is kind and friendly. His specialty: grilled steak, of course.

Not the kind Flemings serves, however. Those elite cuts of prime beef are impeccably juicy and meltingly tender. At Mr. Filet, the meat is less blue blood and more blue-collar, tasty for sure but less succulent. Also, the steaks are orders of magnitude less expensive, which makes them cheap enough to afford for a workday lunch.

A filet steak, which comes with Texas toast and a choice of French fries or baked potato with a golf ball of whipped butter, will run you $10. The ribeye — slightly smaller than the filet — costs $9.45. Note that doneness is not an option, or I should more accurately say that I've never been given one. They come cooked to medium all day, every day.

The plain salad that's included is an afterthought, really, of chopped iceberg lettuce. You help yourself from a countertop cooler, but the one time I tried to skip it, George scolded me. He really prefers that you take your salad, afterthought or no. 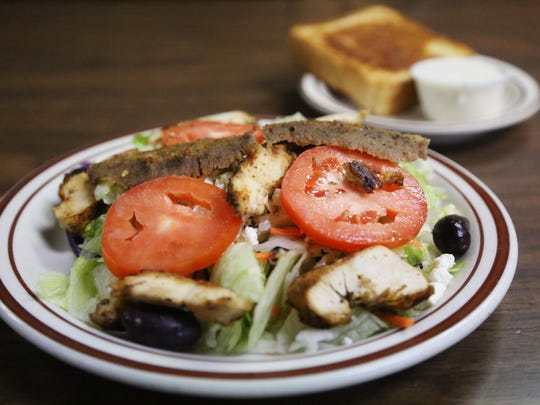 There are also gyros here, which I've never ordered because I'd rather eat steak, and burgers, which I have had and enjoyed. These are not the over-the-top monstrosities en vogue nowadays, so big and messy you can't take a bite without slathering your face and shirt with drippings.

Instead, Mr. Filet burgers are of the everyday variety, which is to say that they are plain and to the point. If you want to get fancy, George offers cheese.

And that lack of pretension in the menu and throughout the restaurant is what I think people find most endearing. The menu is a yellowed alphabet sign overhead and you take your own food to a table on a small plastic tray. Occasionally, staff will walk a dish out to your table if it's taking too long.

This fall, the city plans to raze the parking garage where the restaurant is located and George, who is 70 now, has decided to retire rather than relocate yet again. You can hardly blame him, although in interviews I hear and read online it sounds like he still has a passion for the business.

"If I retire, I'll probably die," he said with a chuckle in one video. "I really like what I do."

So do we, George, and we'll miss you.

CARLOS ACEVEDO is a food editor with Grey Dog Media and a graduate of the Culinary Institute of America in New York.