Raised in Des Moines, Steven Berry has been making films for decades. Much of his time away from home was spent as a professor at Howard University. He's now based back out of Coralvill. 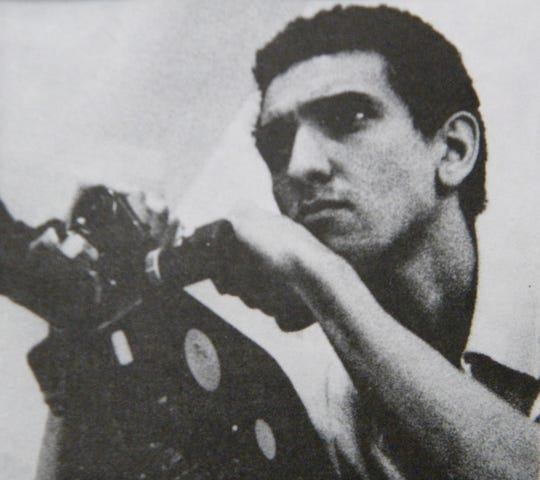 Steven Berry during his time at UCLA (Photo: Special to the Press-Citizen)

"When I left Iowa, which was basically to go to Arizona State — it would have been '78, '79 — I said, 'I am never coming back to this place'," filmmaker Steven T. Berry recently told the Iowa City Press-Citizen. "After 26 years in D.C., Philidelphia, L.A., I am so happy to be back."

The Des Moines-raised, Coralville-based filmmaker is holding a retrospective of his filmography on Saturday at the Artisan’s Sanctuary, located at 1070 7th Ave. in Marion, starting at 5 p.m. The event features five of Berry's films, representing what he has identified as the four pillars of his filmography.

Following each film, Berry plans to hold a talkback with his audience.

"When I was a kid, my father had an 8 mm camera and he would make these little home movies," Berry told the Press-Citizen. "It was always such a thrill when he'd set up his projector and we'd watch it against the wall — that might have been just a little bit of a seed."

As a young man, Berry found himself becoming obsessed with photography and film. He'd stay up late developing photos in a homemade darkroom in his family's garage and enrolled in a photography class in high school.

By the time he got to college, that passion continued to flourish and eventually expressed itself as "Rich."

This first 20-minute film of Berry's retrospective sees Berry as the writer, director and titular figure of the movie. The story of the film follows a young man who has to choose between going to college or directly into the working world.

After his time at UCLA, Berry went to the opposite coast to be in Philadelphia for a few years before he would eventually start teaching at Howard University.

The film he's selected to represent this period of his life is "The Light." The 22-minute film follows a jazz singer who marries a traditionalist reverend who is less than thrilled about her choice of music. Eventually, the singer is forced to choose between her husband and the music she loves.

Coralville based filmmaker Steven Berry photographing himself with a Nikon camera. (Photo: Special to the Press-Citizen)

Belize had been on Berry's ever since he briefly dated a girl from there. Though he never ended up there with her like the two had talked about, the idea of the place stayed with him.

Realizing he wasn't really aware of any Belizian filmmakers, he decided he'd try to set up a production workshop in the Central American country. While there, he ended up making local connections that eventually led to the production of "Noh Matta Wat."

"I'm actually the director and co-creator of a series called 'Noh Matta Wat,' the first dramatic T.V. series of Belize," he said.

This third entry in his retrospective, "Tomasa's Revenge," is a 10-minute portion of the show focusing on a particular character arc rather than a whole episode.

"I took the storyline of Granny Tomasa (played by Carrie Fairweather) when she goes to visit family," Berry said. "She finds out that her niece is in an abusive relationship ... and she handles it."

Four years ago, Berry retired after a 26-year career at Howard University in the Media, Journalism and Film department.

Representing this pillar of his filmmaking, Berry has selected two films from this considerable portion of his career.

"Embalmer" is a horror film about a deranged mortician attempting to resurrect his family. While the original piece is a feature film, the one being screened is a 30-minute cut of the movie.

The second selection is "Game of Cards." The seven-minute short is based on Berry's semi-autobiographic novel "T.E.A.R.S." about dealing with racism as he grew up in Des Moines.

This short adaptation takes place over a game of Gin Rummy as a young Black man plays against his uncle.

Though Berry is currently retired, he still has plans for new films. Currently, he's working on a documentary on the icons of Caribbean music and hopes to begin on a new feature film in the next few years — something he looks forward to being able to do from Iowa after having spent so many years in D.C.