Iowa City Brewfest 2020: Organizers think outside the box to accommodate safety concerns amid a pandemic

Iowa City's Northside Oktoberfest is still happening this year, just not in person. Organizers plan to celebrate the event's 50th anniversary in 2021.

Iowa City Brewfest 2020: Organizers think outside the box to accommodate safety concerns amid a pandemic 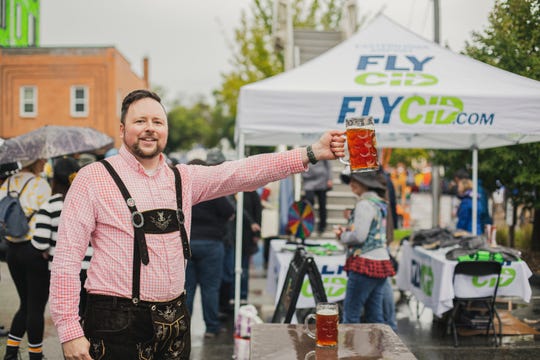 Doug Alberhasky was brought on to help with the first Iowa City Brew Fest 25 years ago because the Iowa City Downtown District was missing a key feature necessary to hold the event.

"They brought me in because they had everything ready to go (except) they didn’t have any beer," Alberhasky recalled of his first year with the group.

This year, Alberhasky and the event's other organizers faced almost the opposite problem: Beer supply isn't the issue, but many hesitate to plan almost any aspect of a traditional gathering like Iowa City Brewfest/Northside Oktober Fest.

As it became increasingly apparent that Brew Fest would not be able to happen in its traditional setting, Alberhasky had a thought: "Brewfest in a box."

“Basically, we knew that we weren’t going to be able to do anything in person," Alberhasky, also the owner of John's Grocery, told the Press-Citizen. "And I kind of came up with the idea of Brewfest in a box just as a way to replicate the experience of Brewfest as much as we possibly could."

► 'This is going to be devastating':Iowa City businesses — new and old — react to postponed college football season

While some of the details of how the boxes will be picked up have yet to be ironed out, Christopher Hunter, the Downtown District's director of special events, is hoping people will be able to pick up their order from the northside without having to leave their cars.

"Oktober Fest is one of our biggest events of the fall — it definitely brings people to the northside," Hunter said. He added that last year's event sold over 1,300 tickets — 500 of which were sold to individuals who paid more for premium "brewmaster's" access. 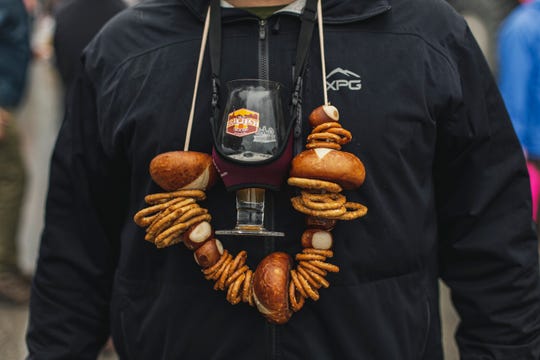 An Iowa City Brewfest participant in 2019 wears a pretzel necklace unique from those traditionally made by Scout Troup 212. (Photo: Courtesy of the Iowa City Downtown District)

Each of the boxes — built for two people and priced at $125 — includes a 12-pack of unique beers from as many Iowa breweries, a pair of drinking glasses, pretzels made by local Scout Troup 212 — the group receives a portion of the funds raised this year — a bake-at-home Pagiliai's pizza, a pizza accessory from the newly opened Prairie Kitchen, a bottle of wine from the Brix & Cheese Shop and gift cards to other Northside neighborhood businesses.

Alberhasky said the boxes are unique in that the beers for the brew packs are being purchased, as opposed to being donated, in order to help out brewers, who took a financial hit from the pandemic, along with so many others.

Similarly, the inclusion of gift cards to area businesses has been organized with the hope of driving business to others in the neighborhood, as well.

"It had to be good for our neighborhood, and by bringing people into the neighborhood in the past, that’s always been (a highlight)," Alberhasky said. "(The unique beers) also gives our beer lovers new and exciting things that they haven’t tried, (and) it gives breweries a chance to showcase something new, something different."

Hunter said he's optimistic that this year's arrangement will benefit Northside neighborhood businesses even more than a typical Oktoberfest, given the $15 gift cards go directly to the selected businesses.

And while this is technically Brewfest's 25th year, the event has been advertised as the 24th-and-a-half. The half-number accommodating this year because Alberhasky doesn't want to concede that the 25th anniversary won't be the big event organizers had planned before the pandemic ground so much to a halt. The plan is to celebrate the 25th anniversary properly in 2021.

"We’d planned to do something really big this year, but this is the best possible solution we could come up with," Alberhasky said. "(Next year,) we wanted to provide some optimism and something for people to look forward to."