The singer headlines Guthrie’s River Ruckus at the end of July.

Iowans road trippin' to Guthrie Center later this month for a night with Toby Keith can expect at least one thing from the bellowing baritone: A red Solo cup full of fan-favorite country sing-alongs.

Headlining the ninth year of summer festival Guthrie’s River Ruckus alongside the likes of Dustin Lynch, Joe Nichols and Clare Dunn, the Oklahoma native rolls into rural, western Iowa days after the release of “Wacky Tobaccy,” a not-so-subtle ode to a pastime only legal in certain parts of America.

Keith hits the River Ruckus stage Saturday night expected to bring a Solo cup-filled dose of hits such as “I Love This Bar,” “As Good As I Once Was” and, of course, “Beer For My Horses.” Behind his star power, organizers estimate 15,000 people will flock to the Guthrie County Fairgrounds for the event.

“Wacky Tobaccy” drops via Keith’s newest album, “The Bus Songs,” which is set for release in September. Calling in on the afternoon before playing his first Nashville headlining show in 13 years, Keith spoke with The Register about the anticipated country gig, the new record and, of course, what it’s like to indulge in a bit of that “Tobaccy” with the legendary Willie Nelson.

Note: This interview has been edited and condensed.

Des Moines Register: What have you been bringing into your set this summer? Old songs? More of the new stuff?

Toby Keith: I try to play as (much) of the great big stuff as I can. Try to mix in a little old with a little new. If you’ve got a crowd and you play a couple No. 1 (hits) and they’re really receptive to it, I’ve got eight or nine more of those I can play. … My set list is kind of open to where — once we get things rolling, once we get a feel for what we’re dealing’ with — we can go in two or three different directions. But I try to get as (much) of the big stuff in there as I can cram into a couple hours.

What’s your favorite moment of the set?

We’re playin’ No. 1 (songs) and we’re playin’ sing-alongs but there’s a mega part of the show where we get on the big roller coaster, and we start just comin’ four or five or six No. 1 (songs) back-to-back-to-back-to-back-to-back. I mean, stuff that really made my career take off. When we hit that big row in there, it’s just like you’re comin’ downhill and you don’t have your breaks out. You’re a runaway train. Watchin’ that emotion kick into the audience … at (that) point in the (show) I’m playin’ the songs that you came to hear. That everybody came to hear.

Will “Wacky Tobaccy” be in the set? 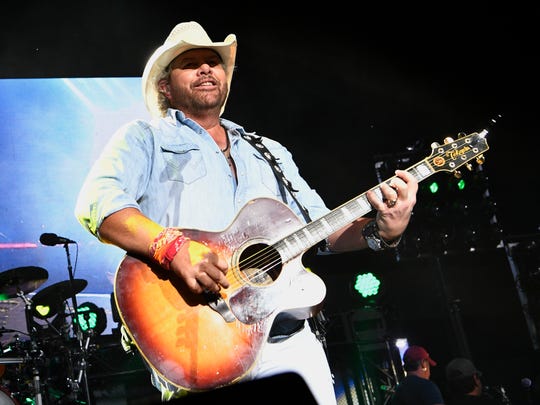 How’re you feeling about that release? It’s been out a week or so now.

What’s cool about it is for the first time ever, we didn’t have to spend any more promoting it. We just made a little video, stuck it out and didn't really intend for it to be a single. … I feel great about it.

You think your fan base is rallying behind it, being about marijuana?

I don’t think my fans are rallying behind it. ... Probably 90 percent of it that I’ve smoked in my grown life has been with Willie Nelson. And that ain’t very much. It’s really not my high. I can handle my high with my liquor, but (marijuana) changes my game face. … I know when I’m with (Willie Nelson) that me and him are gonna sit around and pick or he’s going to show me a card trick or tell jokes or whatever. … But if I get on (marijuana) with him, I get really quiet and take myself out of the party.

The song’s part of the new record, “Bus Songs.” What’s this album's story?

Well, I wrote a song years ago called “Never Smoke Weed With Willie Again,” and I played it in the show live for years. And then I wrote some funny military songs on my USO tours. I don’t really play them every night because the lingo and terminology that’s used in there — you’d have to about be in the military to understand everything about ‘em. They’re real humorous, comical songs that aren’t really album-type songs. Over the years I’ve accumulated a lot of 'em and my people came in and said, “man, you oughta just grab all of those old bus songs and throw “Wacky Tobaccy” on there and put it out as an album."