UPDATE: Elton John might be coming to Iowa after all?

UPDATE: Elton John might be coming to Iowa after all?

Fans hoping to gain access to tickets via the Ticketmaster verified pre-sale via yellowbrickroad.tmverifiedfan.com are given three options for shows they’d wish to attend. Under the drop-down menu is an option labeled “2019 TBA — Des Moines, IA.” 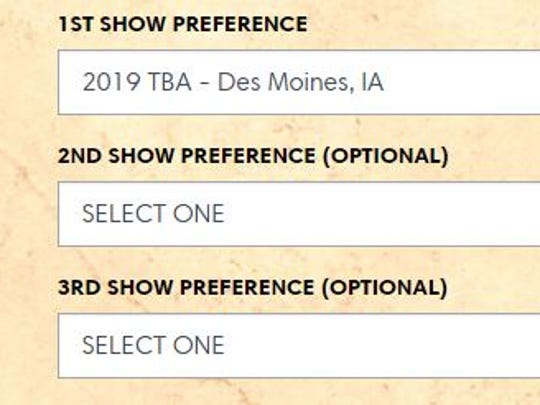 A screenshot of yellowbrickroad.tmverifiedfan.com. Elton John's farewell tour hasn't confirmed a Des Moines date, but the city appears in the "to be announced" section of the tour's presale. (Photo: The Register)

It’s not an outright confirmation from Sir Elton that he’ll be paying Iowa one more visit, but it does give fans a nice clue into his to-be-announced plans for the farewell tour.

Original story, published 1:58 p.m., Jan. 24: Iowans wanting to see Sir Elton John on his newly-announced farewell tour are going to have to gas up the car and head to a nearby state — the beloved songwriter did not announce an Iowa show Wednesday when revealing the run of North American dates.

The 70-year-old Rock and Roll Hall of Fame “Goodbye Yellow Brick Road” penman took the Gotham Hall stage in New York City on Wednesday to emotionally announce his retirement from the road.

But first, John plans to embark on a 300+ date world tour that hopes to run through 2021. North American shows were unveiled, with tickets going on sale starting Feb. 2.

"I'm not going to be touring and traveling the world,” John told CNN’s Anderson Cooper, who moderated the live streaming event. “My priorities have changed.”

More: Elton John announces his upcoming tour is his last, says 'My priorities have changed'

A father to two young boys, John noted his need to dedicate more time to his family as a major factor for leaving the road. He does, however, still plan to write and record music.

A world-class songwriter and performer behind timeless numbers such as “Tiny Dancer” and “Rocket Man,” John last appeared in Des Moines in 2010 at Wells Fargo Arena. In 1973, He performed one of the most well-attended Iowa State Fair Grandstand shows in history, bringing an estimated 19,400 rock ‘n’ roll fans to the venue for his appearance.

With no Iowa date confirmed, here’s a look at John’s confirmed farewell shows in the region, courtesy of Rolling Stone: