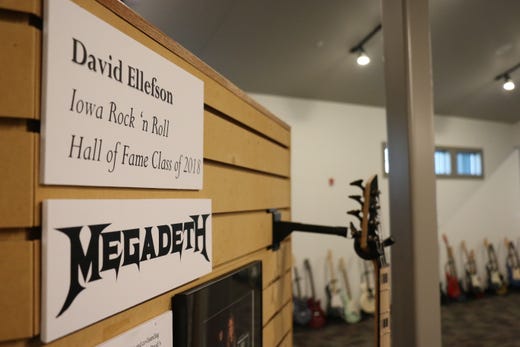 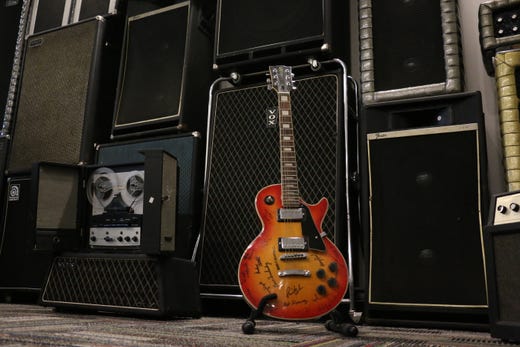 A line of amplifiers and an autographed guitar inside the Iowa Rock 'n' Roll Music Association Hall of Fame. The hall opened in 1997 and inducts about 30 artists, groups or organizations annually. Matthew Leimkuehler/The Register
Fullscreen 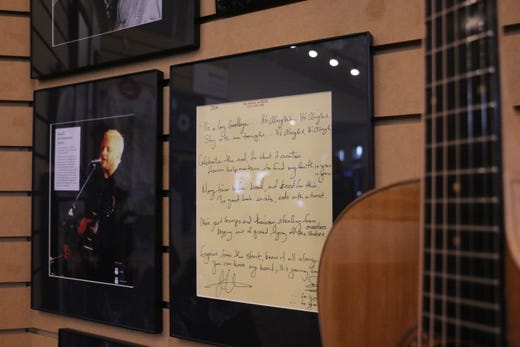 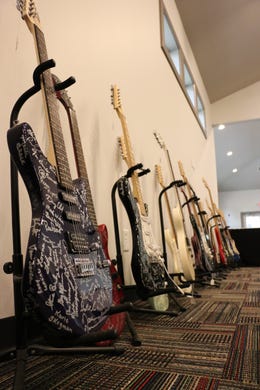 A row of autographed guitars inside the Iowa Rock 'n' Roll Music Association Hall of Fame. The hall, located in Arnolds Park, opened in 1997 and inducts about 30 artists, groups or organizations annually. Matthew Leimkuehler/The Register
Fullscreen 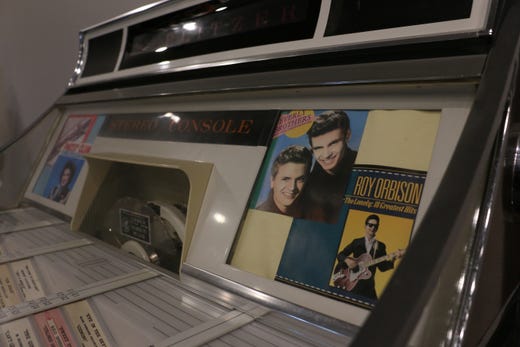 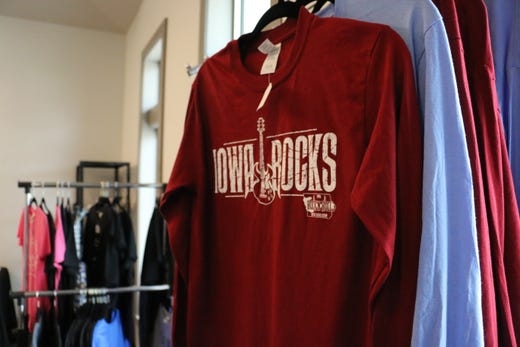 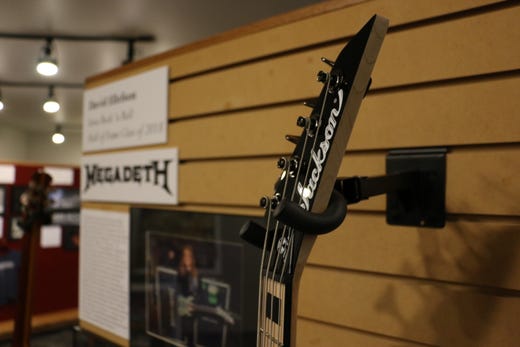 A display for David Ellefson, bassist for Megadeth, inside the Iowa Rock 'n' Roll Music Association Hall of Fame. The hall, located in Arnolds Park, opened in 1997 and inducts about 30 artists, groups or organizations annually. Matthew Leimkuehler/The Register
Fullscreen 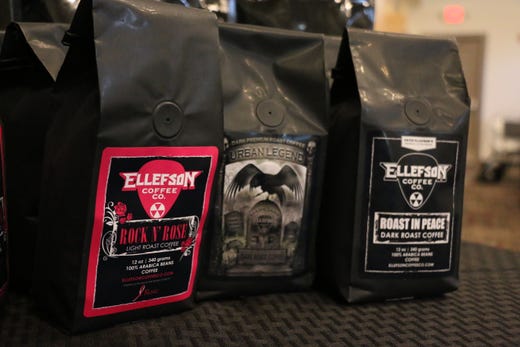 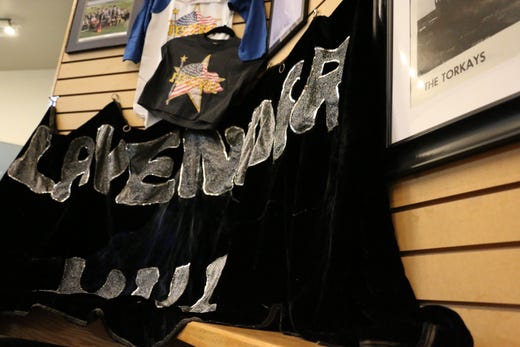 A display for Lavendar Hill inside the Iowa Rock 'n' Roll Music Association Hall of Fame. The hall, located in Arnolds Park, opened in 1997 and inducts about 30 artists, groups or organizations annually. Matthew Leimkuehler/The Register
Fullscreen 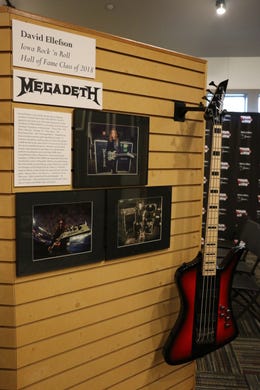 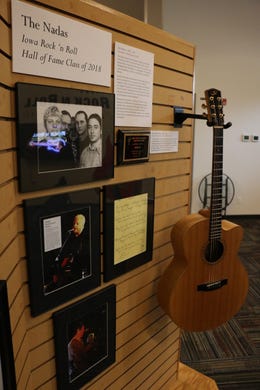 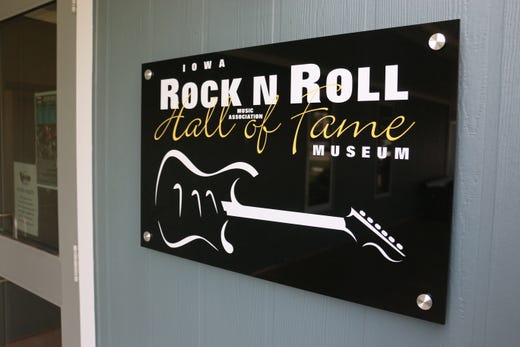 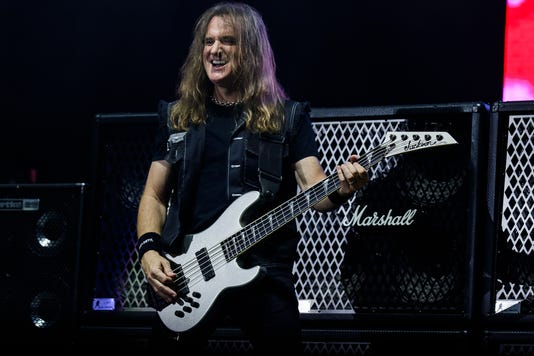 David Ellefson, Megadeth bassist and inductee into the Iowa Rock 'n' Roll Hall of Fame.(Photo: Fer Garcia/Special to the Register)

He passed the Mall of America in suburban Bloomington and remembered where the Met Center once stood. It was there that Ellefson recalled seeing a concert influential in fueling his young love for music — KISS in 1977, part of the “Rock & Roll Over” tour. Not yet a teenager, his mom chaperoned the night.

Ellefson wouldn’t be watching shows from the seats for long, though.

He returned to the Met a decade later, playing for thousands as the bassist of riff crunching cornerstone thrash metal band Megadeth. He shared the stage that night with Iron Maiden.

Ellefson's trip continued into rural southwestern Minnesota, where as a teenager he replaced Friday nights on a football field for entertaining audiences in ballrooms and dance halls.

He inched closer to his hometown, Jackson, Minnesota, and 35 years of rock dominance washed away. He no longer felt like a Grammy Award-winning bassist, record label owner or industry lecturer.

In Jackson he's just David, a boy who spent afternoons on his family's farm studying Aerosmith on the FM airwaves.

“I get a little closer to my real roots as I head down into Jackson,” Ellefson told the Register. “All of a sudden, I don’t feel like a rockstar on tour any more. I feel like the kid coming back home. The same kid who used to drive to high school; my mom and dad taking me around ... I become the five year old boy." 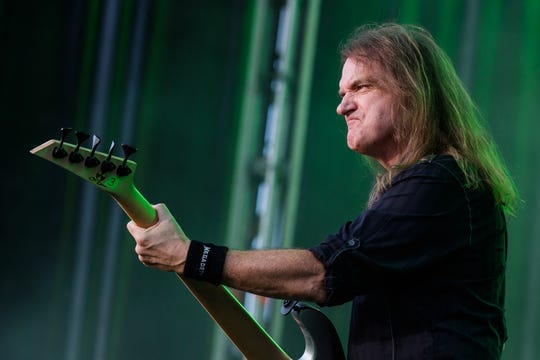 But this trip doesn’t stop with Jackson. Ellefson travels a few more miles south to the Iowa Great Lakes, where the bassist was honored as one of 31 artists, organizations and bands entering the Iowa Rock 'n' Roll Hall of Fame.

He joined a class highlighted by Iowa favorite the Nadas and Okoboji legend Marilyn Maye.

MORE: One of Iowa’s favorite bands is celebrating 25 years (and doesn't plan to stop making music any time soon)

The hall inducted Ellefson under its “border band” category, said executive director Cindy Stanbro. The organization is undergoing a $1.5 million capital campaign in hopes of remodeling the 3,000 square-foot space.

Stanbro said Ellefson is the first metal figure to enter the hall. Artists and venues become eligible after 25 years of contribution to Iowa music.

“What we’re trying to show people is that rock ‘n’ roll … it encompasses so much,” she said. “We really wanted to challenge ourselves as board this year to fully represent the spectrum of rock ‘n’ roll in Iowa." 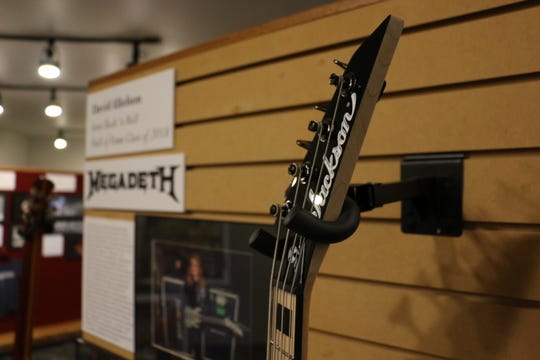 A display for David Ellefson, bassist for Megadeth, inside the Iowa Rock 'n' Roll Music Association Hall of Fame. The hall, located in Arnolds Park, opened in 1997 and inducts about 30 artists, groups or organizations annually. (Photo: Matthew Leimkuehler/The Register)

Jackson sits about a half-hour north of Okoboji and Ellefson recalled bringing his pre-Megadeth acts to Iowa ballrooms in Bancroft and Estherville, to the west in Sioux Falls, South Dakota, and east to Fox Lake Ballroom in Sherburn, Minnesota.

He caught touring acts like Head East and Black Oak Arkansas at Okoboji’s own Roof Garden.

But he knew if he wanted to really make it in music, he needed more. So while rehearsing one afternoon on the farm at 16, Ellefson decided he would move to Los Angeles.

“It was like the hand of God came down and said, ‘Go west, young man,’” The 53-year-old rocker laughed. “To The degree that I ran up to the house and told my parents I’m gonna dye my hair blonde, change my name, get an earring and I’m moving to L.A. tomorrow.”

That’s not exactly how it happened.

“They said, ‘Yeah, right. You’re going to school tomorrow.’ But that started my plan,” he recalled.

The plan ultimately worked. Ellefson packed his bags days after graduating high school and went west with his sights set on studying at Musicians Institute. He moved into a seedy apartment on Hollywood Boulevard and soon realized what he left behind.

“I knew I was comfortable as I was growing up,” he said. “I didn't know how comfortable I was until I moved to Hollywood and I cut ties, essentially, with all my comforts back here in the Midwest.”

But it was in that same apartment building where he met a down-on-his-luck guitarist who days before had been dismissed from an up-and-coming thrash act called Metallica.

The guitarist was Dave Mustaine and the musical partnership he and Ellefson formed would later bring the world some of metal’s most celebrated compositions: “Peace Sells,” “Symphony of Destruction,” and of course, the “Rust in Peace” album, considered one of the genre’s greatest accomplishments. 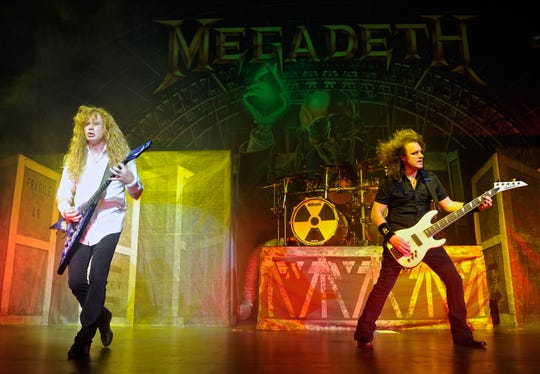 MORE:A capella country? Bad Religion on a banjo? Nothing is off limits for this Iowan’s covers album

Accompanied by a rotating cast of players, the co-founding Megadeth members went on to sell 30 million records.

“That moment, where he sorta fell out of Metallica and I landed in L.A., was just this perfect XY axis in this moment of heavy metal history,” Ellefson said.

They would light a fire in generations to come, including Iowa’s own Green Death. The Des Moines band signed with Ellefson’s label in 2015 and plans to put out its second full-length album under his guidance in October.

For years, the often described “Big Four” of thrash — Metallica, Megadeth, Anthrax and Slayer — influenced Green Death vocalist Sol Bales. So working with one of the architects of the genre is “invaluable,” he said.

“They’re all pretty much living legends at this point,” Bales said of Megadeth. “Getting to work with one of those guys is crazy. Every time we have to talk to David about anything it’s like, ‘Oh, we have to call David Ellefson. That’s not weird at all.’”

Yes, Megadeth has proved to be an act unaffected by time. The band continues to gain critical steam in its third decade, winning the “Best Metal Performance” Grammy Award in 2017 for “Dystopia,” its 2016 studio release. 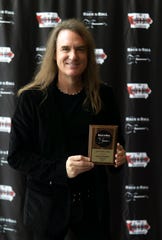 Why start a label in an industry that’s selling less music? Because Ellefson believes in the craft and knows well the obstacles aspiring musicians face.

He added: “I got to a point in my life where I was done asking people for permission. That, to me, is the spirit of rock n roll.”

And celebrating the rock ‘n’ roll spirit is how Ellefson spent his weekend in northwest Iowa. He greeted fans, told stories of life on the road, and remembered fondly where his dreams started.

“I’m not a kid who had a disgruntled chip on my shoulder,” he said. “I was never that kid. I had a great upbringing here. I had a great family. I have only great memories of my life growing up here.

“I come back with only good will and great memories and this is the cherry on top.”