'Baby, It's Cold Outside': Why Iowa radio stations aren't banning the holiday song

Radio stations are cutting "Baby, It's Cold Outside." Here's why stations in Iowa's biggest cities won't be joining them.

'Baby, It's Cold Outside': Why Iowa radio stations aren't banning the holiday song

In the wake of many sexual harassment claims, is 2017 the year we retire ‘Baby, It’s Cold Outside’? 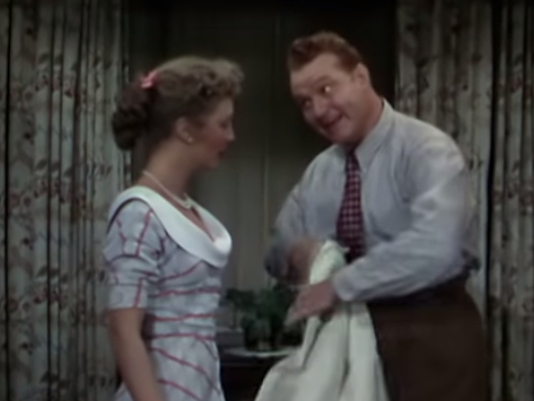 “Baby, It’s Cold Outside,” which is featured in this scene from "Neptune's Daughter," may be on the outside looking in during this holiday season.(Photo: Deseret News)

Controversy swirls this holiday season around the lyrics to the 74-year-old holiday tune “Baby, It’s Cold Outside.” Are Iowa radio stations joining the flurry?

Radio programmers in Cleveland, Toronto and Madison, Wisconsin, banned the 1944 holiday track from airwaves this season, citing the song’s call-and-response lyrics — portraying a man unwilling to hear “no” when asking a woman to stay the night — unfit amid the #MeToo movement.

But brand managers for holiday stations in Iowa’s two largest cities — More 104.1 KMYR in Des Moines and 104.5 KDAT in Cedar Rapids — tell the Register that neither plan to cut the tune from its holiday rotation.

“... (T)here are those who are genuinely offended by the song, and to them I say: I understand and I'm sorry if you are offended,” Mike Ferris, KDAT brand manager, wrote in a post on the station’s website.

In the statement, Ferris continued to explain he believes the majority of listeners want the song on air: “...(many) understand the difference between the flirty playful nature of the lyrics and harmful manipulation. Most would agree that this song’s lyrical intention was not originally meant to be interpreted as creepy or manipulative.”

In banning the song, radio host Glenn Anderson at WDOK in Cleveland wrote, "I do realize that when the song was written in 1944, it was a different time, but now while reading it, it seems very manipulative and wrong.”

More: Where to hear holiday music on the radio in Iowa

Lyrics taking fire from the crooning Frank Loesser-penned track include, “I ought to say, no, no, no sir (mind if I move in closer?)” and “At least I'm gonna say that I tried (what's the sense in hurtin' my pride?).”

Social media backlash greeted Cleveland and Madison’s choice to pull the track. Stations in San Francisco and Denver left the decision up to listeners, running online polls. Roughly 95 percent of voters in the Colorado poll elected to keep “Baby, It’s Cold Outside” on air.

And the debate continues to appear on social media threads and in column inches. Rochelle Riley, a columnist for the Detroit Free Press, argues to let the song play: “We don't need men to censor songs on the radio as if women are helpless. We need men to not believe they have a right to sexual assault or harassment because it's the way it's been done.”

More: Riley: Banning 'Baby, It's Cold Outside' is not protecting women

Listeners in Cedar Rapids hear the Academy Award-winning cut about four times a day, said Ferris. More 104.1 brand manager Scott Allen didn’t share how many times the station plays the song daily, but explained it’s in a secondary tier of rotation, getting fewer spins compared to staples such as “Rudolph The Red-Nosed Reindeer” and “It’s Beginning To Look A Lot Like Christmas.”

More 104.1, an adult contemporary station managed by the Des Moines Radio Group, switched Nov. 12 to holiday formatting, with plans of maintaining the seasonal playlist through Christmas.

Allen said he’s received an “overwhelming” number of calls and emails from listeners asking to keep the song on air, reaffirming a decision to keep the song. More 104.1 first began holiday programming about a decade ago.

"I believe that our job is to serve the audience that decided to choose us as their station, especially during this time of year," Allen said. “Our plan is to stick with it, based on their feedback."