In Des Moines, Blake Shelton parties for nearly three hours with his ‘friends and heroes’

In Des Moines, Blake Shelton parties for nearly three hours with his ‘friends and heroes’

Blake Shelton on how he hopes Ole Red will help launch the career of the next star at Ole Red Gatlinburg on Wednesday, March 13, 2019. Knoxville

Country star Blake Shelton took the stage Thursday night in Des Moines and made a promise to nearly 12,000 onlookers.

“I came here for one reason, and that is to slap y’all in the face with about three hours of country music,” he said, pausing after show opener “Neon Light.”

And, from there, he went to work.

“The Voice” coach and chart-topping country entertainer brought a marathon 39 songs to his Wells Fargo Arena set, merging country past and present by sharing the stage with genre staples John Anderson, The Bellamy Brothers and Trace Adkins.

Billed as a stop on the “Friends and Heroes” tour, Thursday marked Shelton’s first performance in the Hawkeye State since headlining the inaugural Kinnick Stadium concert in 2016.

“Call me stupid, but I did not expect this from y’all on a Thursday night,” Shelton, following 2013’s “Sure Be Cool If You Did,” told his audience. “… Country music freaks out here, man. Y’all need to settle down.” 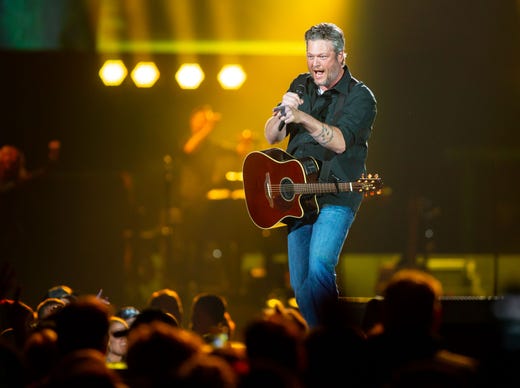 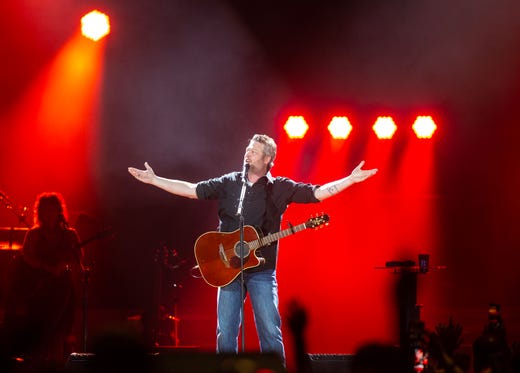 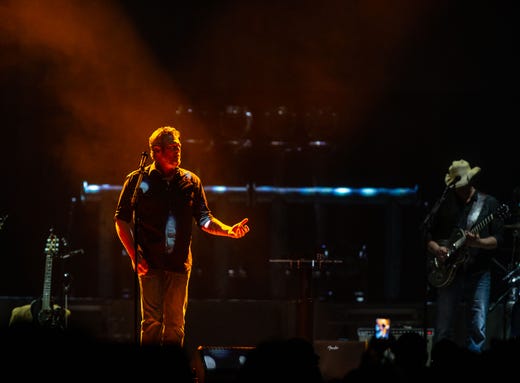 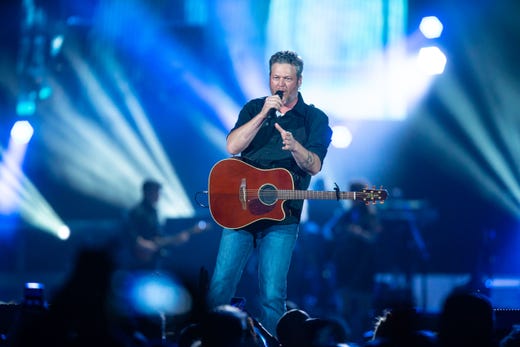 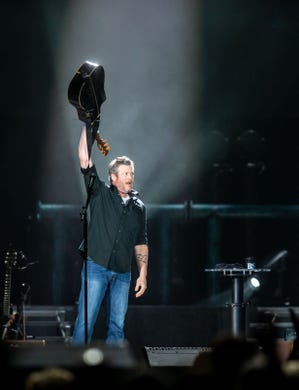 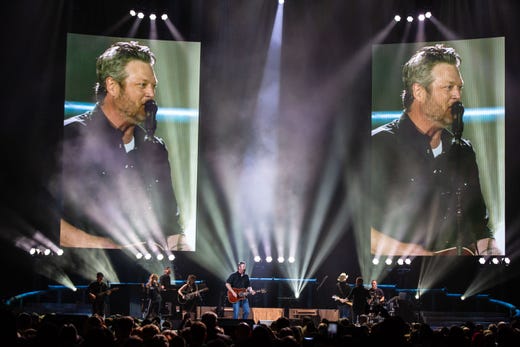 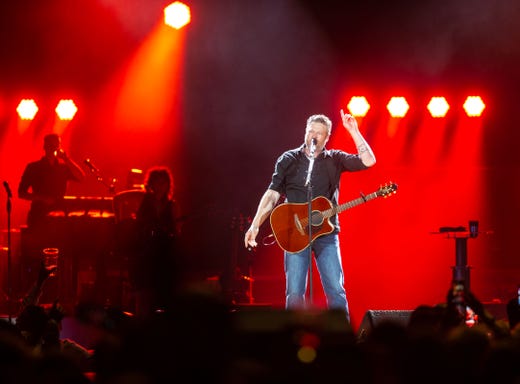 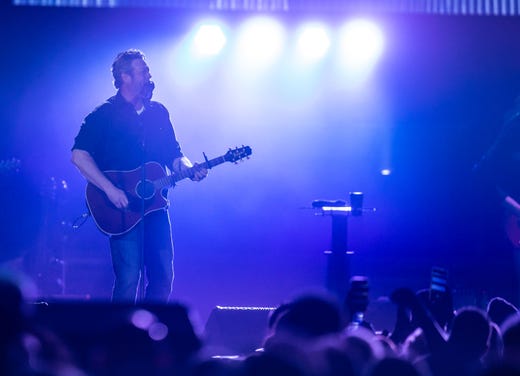 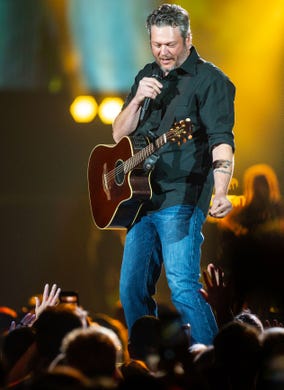 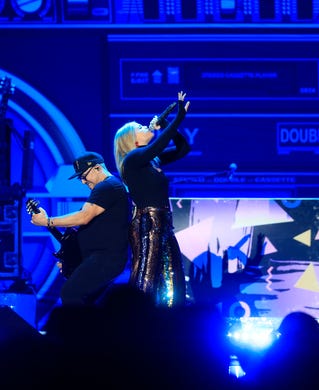 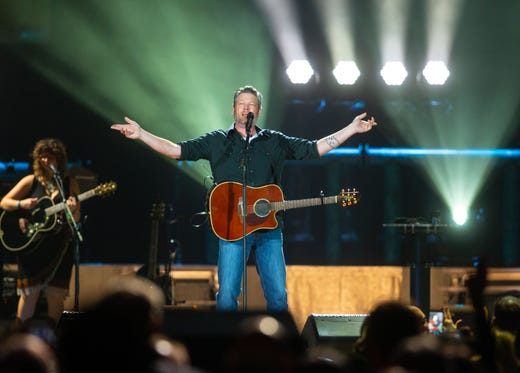 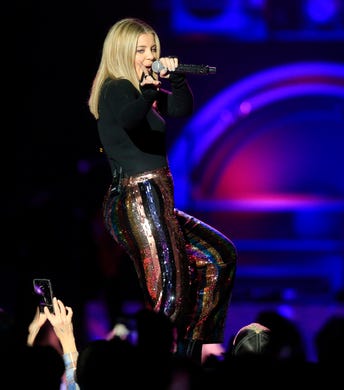 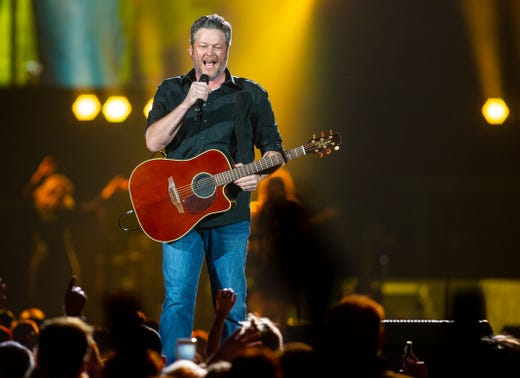 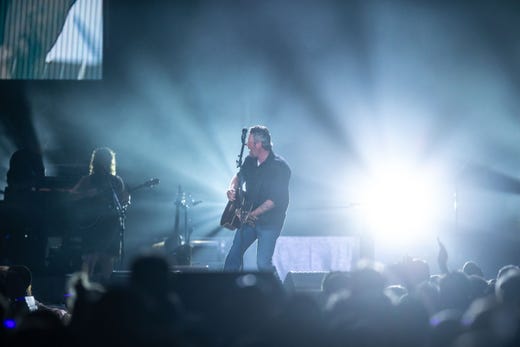 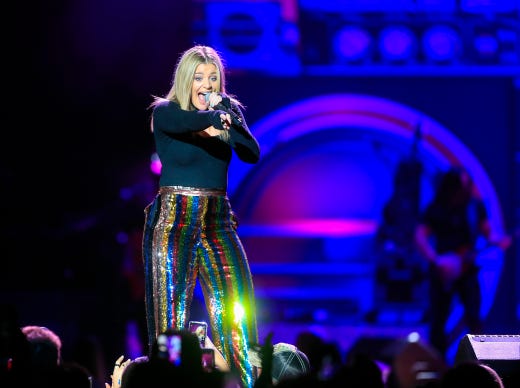 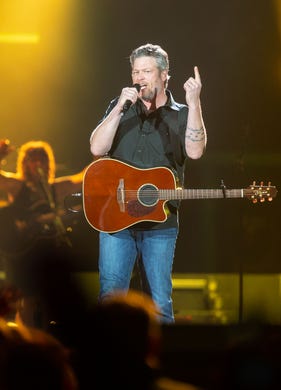 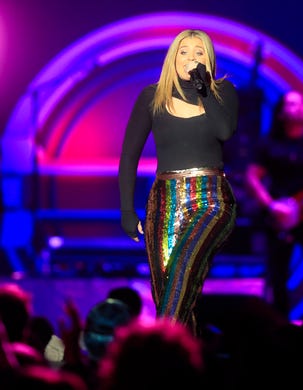 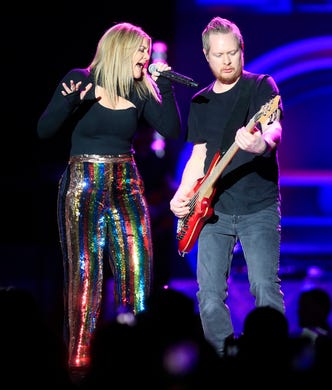 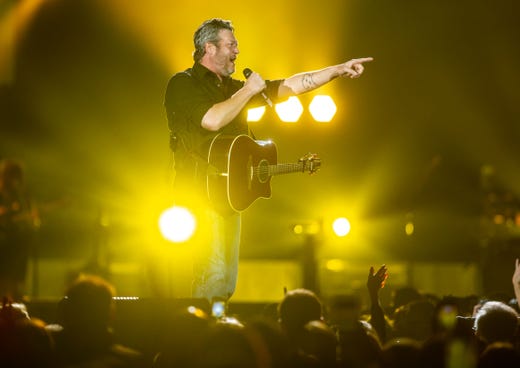 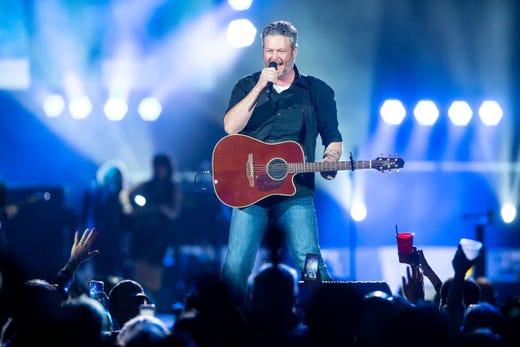 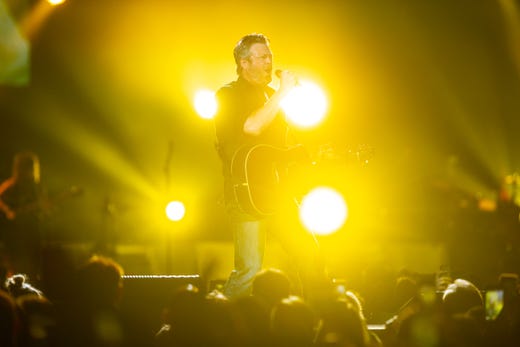 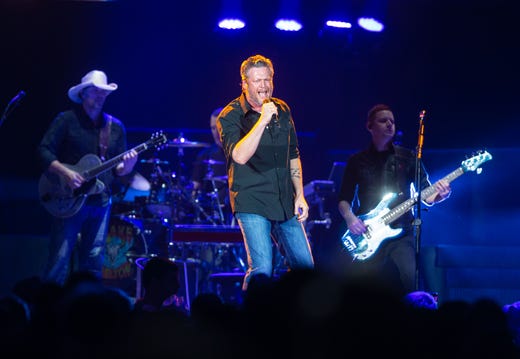 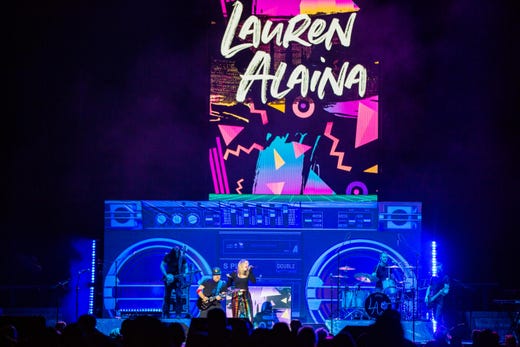 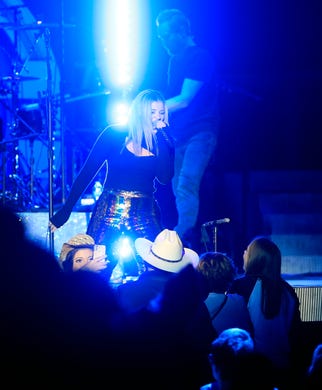 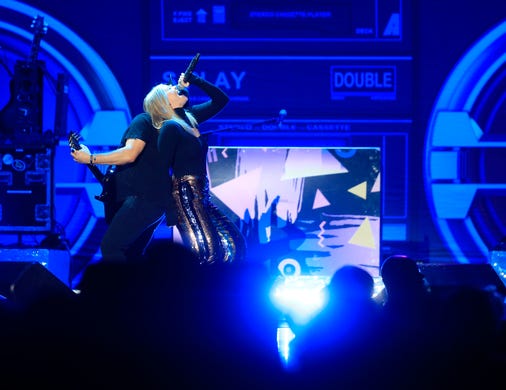 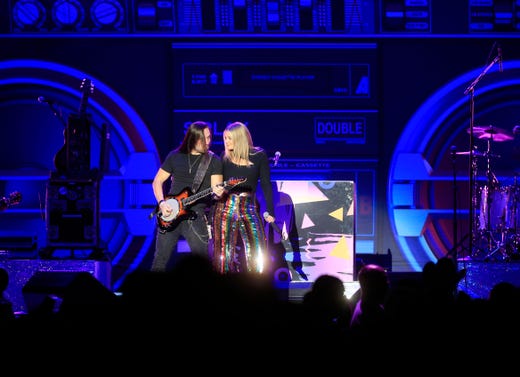 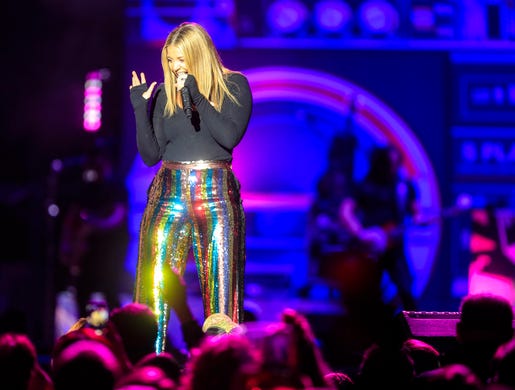 About those friends and heroes: Shelton brought to Des Moines an out-of-the-box arena idea: Skip hours of opening acts and, instead, rotate support artists through the night’s headlining set.

The idea worked. Fans still get a show from Shelton — he delivered 27 tracks — while being treated to a soundtrack provided by the star’s “heroes” — Adkins’ “Badonkadonk,” Bellamy Brothers’ “Let Your Love Flow” or Anderson “Swingin’,” to name a few.

► We take you behind the scenes. Make sure you have full access.

Just as Shelton rolled through “Honey Bee” or “I’ll Name The Dogs” or “I Lived It,” he’d yield the stage to another act, feeding the raucous crowd with a throwback country anthem. He doubled as host and main attraction, applauding each artist that borrowed the stage.

“Y’all notice this tour is called the ‘Friends and Heroes’ tour?” Shelton said following Anderson’s set. “That’s a hero right there, man. I love it.”

And Shelton fit the night's sole support act, Lauren Alaina, into the mix, too. A rising country pop star with powerful vocals, Alaina performed a duet of 2014’s “Lonely Tonight” with the Oklahoma native. 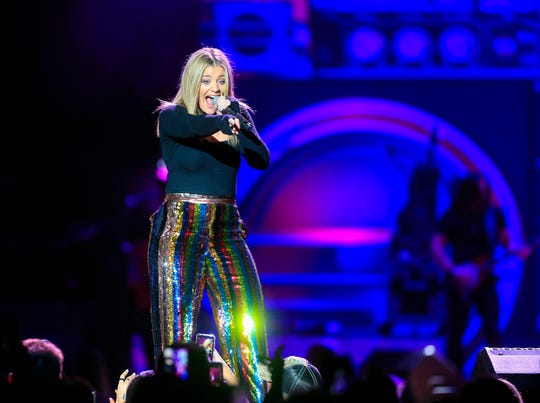 The Shelton show: Still, it was clear Thursday night belonged to Shelton. He worked the crowd with humor and glass-raising anecdotes, teasing about $15 arena beer and rival “Voice” judge Adam Levine.

“Did you say ‘Team Adam?'” Shelton joked with one fan. “You can kiss my ass. Security! Get this man. Who the hell is Adam? This man is drunk.”

The night’s highlight came when Shelton and each of his heroes congregated with acoustic guitars, swapping songs and harmonizing each other’s cuts. Shelton kicked the unplugged round off with “Who Are You When I’m Not Looking,” but it was fiddle-tinged Anderson number “Straight Tequila Night” that earned highest praise from the 11,800 attendees. 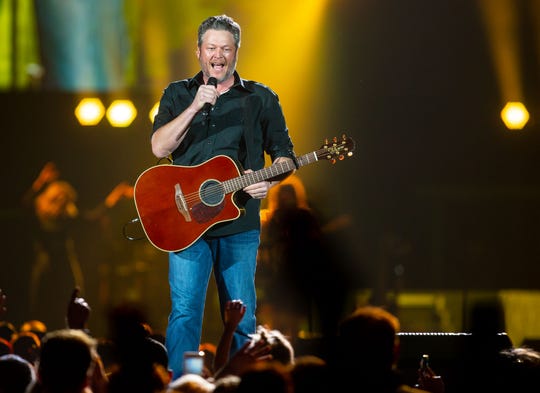 “I call this the 2019 'Friends and Heroes' country music song-off,” Shelton said. “I don’t think I’ve been callin’ it that, but I’m callin’ it that tonight. … We are going to decide tonight who has the greatest country song among us.”

Following the "song-off," Shelton brought his country marathon to an initial end with 2001 seminal hit “Austin." He returned, though, to echoes of "red-red-red-red-redneck" and a two-song encore, starting with 2013 hit "Boys 'Round Here."

Shelton closed with 2011's "God Gave Me You," offering a final bow and word of praise.

"I love Iowa. I love country music fans," he said, raising a final glass. "I can't wait to see y'all down the road somewhere."