After a dry spell, Iowans are seeing a lot of the Rilo Kiley frontwoman 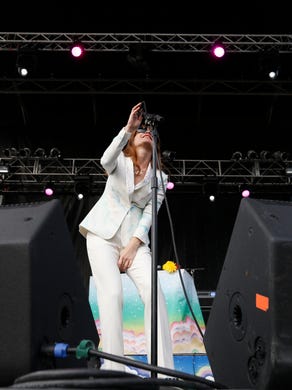 Brandon Rucker (right) of Rochester, Minn., reaches out for an inflatable ball being bounced around the crowd as Jenny Lewis performs Friday, July 10, 2015, at the 80/35 music festival in downtown Des Moines. Michael Zamora/The Register
Fullscreen

"I never thought I'd play to so many people in Des Moines," Jenny Lewis told the 80/35 crowd Friday from the main stage.

To be fair, Iowa has had a Jenny Lewis drought for pretty much ever. Despite associations with neighboring Omaha, Iowa performances by her were non-existent for years. But last month she performed at the Gentlemen of the Road Stopover in Waverly, and Friday she was performing in Des Moines.

She also told an anecdote about recently riding a tractor in the Quad Cities. What Iowa location will Jenny Lewis head to next?

Lewis started her show with "Silver Lining," a song by her defunct indie rock band Rilo Kiley before moving behind a keyboard for "Head Underwater off her latest solo album, "The Voyager." Midway through the song, Lewis rose and started throwing flowers out to the crowd.

"What's up, dudes? It's so good to be here," Lewis told the crowd. "Here's an oldie," she said before singing another Rilo Kiley song, "The Moneymaker." Lewis strutted around the stage, one hand in the pocket of her white pantsuit. It was a casual strut.

Lewis' vocals were crystal clear throughout the set, assisted by harmony vocals from Megan McCormick and Tristen Gaspadarek on songs like "With Arms Outstretched."

At times Lewis seemed like a throwback country star, especially on some of her twangier material like "You Are What You Love" from her collaboration with The Watson Twins.

Lewis returned to the Rilo Kiley well again for "Portions For Foxes" as balloons began to cascade over the fence out into the crowd, followed by "A Better Son/Daughter."

"You guys are amazing," Lewis told the crowd, before closing out her set with "Acid Tongue" from her solo catalog. It was a great set, and a worthy warm-up to Wilco.