Jeff Tweedy of Wilco tips his hat to the audience Friday, July 10, 2015, on the Hy-Vee main stage at the 80/35 music festival in downtown Des Moines. Michael Zamora/The Register
Fullscreen 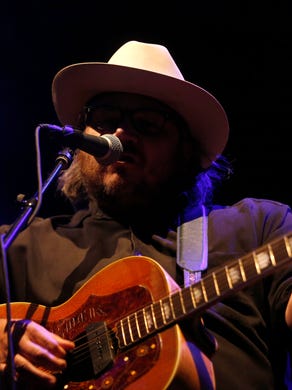 The Chicago band Wilco was more than punctual Friday night, starting its set several minutes early with the song "Handshake Drugs." Around 8,000 attendees were estimated in the festival's mainstage area.

From there the band went into "Kamera" off its 2002 album "Yankee Hotel Foxtrot," continuing to pull from the classic album with "I Am Trying to Break Your Heart."

It was a mellow start to the headlining set, but Wilco amped things up a bit with its third song, "Art of Almost," rocking out end. The following song, "Hummingbird," saw things go to an almost absurdly upbeat level, complete with an audience sing-along. Then things got dark again with "Panther."

It certainly kept things from getting boring.

"You look good, you look well," Tweedy told the crowd. Things Jeff, we've been working out.

Next Wilco went back to its first album, "A.M.," for "Shouldn't Be Ashamed." The song was more country-tinged than the preceding songs. Wilco was born from the ashes of the pioneering alt. country group Uncle Tupelo, so a continuation of the earlier sound was to be expected.

After conferring with the band, Tweedy decided that next song, "Secret of the Sea" was from "Mermaid Avenue Vo. II," not Vol. I. The album was a collaboration with Billy Bragg, turning unrecorded Woody Guthrie lyrics into full songs. Those two are probably my favorite Wilco releases. I could have sat through an entire set of "Mermaid Avenue" songs.

Then came "Heavy Metal Drummer," though the real heavy drums came from Glenn Kotche during "Via Chicago," with the drummer unleashing an avalanche of sound while Tweedy didn't change his vocals at all. It was an odd juxtaposition, but entertaining for a song.

"What a lovely night, this is completely reasonable," Tweedy told the crowd. "Last weekend we played in Phoenix, AZ. Phoenix AZ in July. I'm just saying this is better."

Next up was "Born Alone" and "Laminated Cat" before Wilco went back to "Yankee Hotel Foxtrot" for "Jesus, Etc."

The crowd pleasing "Box Full of Letters" and "Red-Eyed and Blue" and "I Got You (At the End of the Century" closed out Wilco's main set with more 90's material. After briefly leaving the stage, Wilco returned for an encore of "Monday" and "I'm a Wheel."

Overall, it was a satisfying end to the festival's first night, setting things up for an even bigger Saturday.