When the Sonic Factory Recording Studio owners look to bring in an outside act to record, they don't just sell themselves, they sell Des Moines.

"We always tell people about the city's events and beers and venues and the sculpture garden," co-owner Tony Bohnenkamp said. "We don't want bands to just isolate themselves in our studio; we want them to experience Des Moines."

The Sonic Factory won a Mixie Award for its work in bringing acts to Des Moines to record, as well as spreading the gospel of Des Moines outside the state.

This year thousands of music fans got to experience Des Moines in the Des Moines Embassy at South by Southwest in Austin, with countless others walking by the prominently displayed tent. New Sonic Factory co-owner Ryan Surber helped connect the Des Moines Partnership with the available Live Nation tent. For almost a week the tent was packed with Iowa acts like James Biehn, Max Jury, Canby (as well as Mixie winners The Maytags and Bonne Finken), Iowa beverages like Exile and Templeton Rye and nationally known acts like Hawthorne Heights and MURS.

"I think some really cool stuff will happen now throughout the year thanks to the presence of the Des Moines Embassy," Surber said.

Bohnenkamp and co-owner Jon Locker were once members of The Nadas, and in the early days of the Sonic Factory opening in 2007, The Nadas were doing enough work there that it was mistakenly thought of as The Nadas' studio. But over the years, acts like The Envy Corps, Max Jury, Bonne Finken and even Imagine Dragons have done work there. Engineer Matt Sepanic worked extensively with Slipknot at his former studio. So the studio has expanded, but Locker, Bohnenkamp and Surber want to see it doing even more. 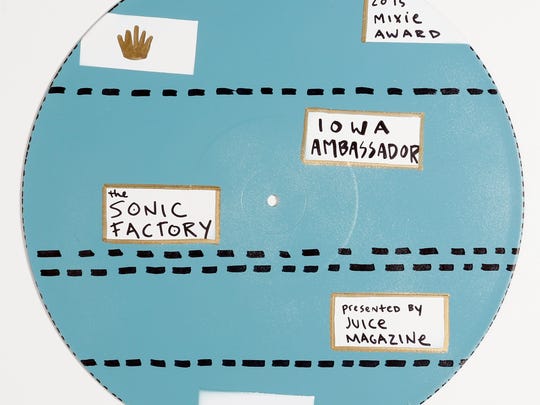 Lefty's Live Music opens this month across the street on University and Sonic Factory's owners are hoping to capitalize on that. The studio was recently expanded and they hope to set up short listening room shows with touring Lefty's acts with the possibility of recording the shows and putting out limited vinyl releases.

And, of course, they plan to return to SXSW next year to further spread the word of what's happening in Des Moines.

"Des Moines has something for every size of band," Locker said. "A band should pass through, pick up a Raygun shirt and play a live session at Sonic Factory."