This popular design won't be on Iowa's new license plate. Here's why.

Former Raygun lead designer John Bosley said Iowa currently doesn't have the "worst license plate in the world," but thinks there are better ways to visually highlight the state.

This popular design won't be on Iowa's new license plate. Here's why.

The winner, which will be announced in late August or early September, will represent the first change in the design of Iowa's license plates in more than two decades. 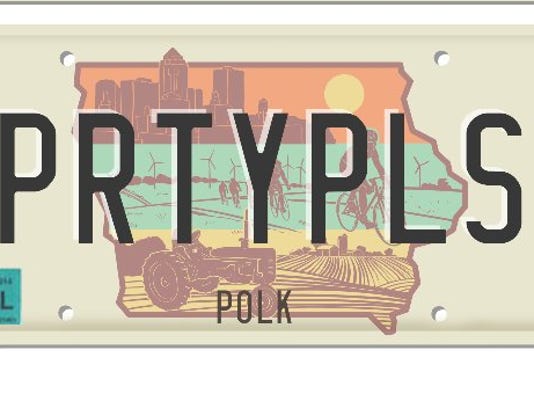 John Bosley, 36, of Des Moines, reached out to the Iowa Department of Transportation on social media Monday about using his "Layers of Iowa" design as the new Iowa license plate. Bosley was the lead designer at Raygun from 2009 to 2015.(Photo: Courtesy of Bozz Prints)

And when he took the idea to social media, many thought he nailed it.

Hey @iowadot, how many retweets do I need to make my "Layers of Iowa" design the new IA license plate? pic.twitter.com/s3w2aERJuC

The Iowa Department of Transportation announced in July that motorists will be getting new plates next year, per a previous Register story. They'll be installed on 4.2 million vehicles over a 10-year cycle to replace the existing ones.

Introduced in 1997, Iowa's current white, blue and gray-colored plates feature a town and country theme with a farmstead and two silos silhouetted by a city skyline. Bosley, 36, of Des Moines was the lead designer at Raygun from 2009 until leaving in 2015 to start his own company, Bozz Prints. His "Layers of Iowa" is one of his most popular designs: A three-layer map that showcases the state with the downtown skyline on top, RAGBRAI riders in the middle and a farmer riding a tractor on the bottom.

Bosley said Iowa currently doesn't have the "worst license plate in the world," but thinks there are better ways to visually highlight the state.

"Iowa is colorful and diverse," Bosley said. "It'd be cool to spruce it up a bit."

His design was turned down by the Iowa DOT, Bosley said, because of concerns of legibility for law enforcement and the amount of usable space.

"The design would have to be pulled apart to work for a license plate," he said, adding that he's open to modifications.

Hate to throw a wet blanket on this, but we talked to the designer and we're not going to be able to do this one, but new design is coming!

We're bummed, too. We love the creativity, but so many parameters 2 meet 4 design. We're rolling out the new ideas for public comment soon!

Andrea Henry, director of strategic communications at the Iowa DOT, told the Register there's a lot to consider "when we look at the designs of the license plates."

"One of the things that's difficult for designs is to have them behind that alpha-numeric combination," Henry said. "We have to make sure that anything behind there is very muted, doesn't have a lot of detail."

Henry told the Register in July that there were "a large variety of draft designs" for the new plates. She acknowledged Thursday that the Iowa DOT's internal design team had as many as 40 creations.

Now, they've trimmed down to three.

"We've had inputs from several other government agencies and the governor (Kim Reynolds)," Henry said.

Reynolds and the Iowa DOT revealed the three finalists Thursday at the Iowa State Fair.

The three designs are available for public vote from Aug. 10-20, either in person at the State Fair or online at the Iowa DOT's website.

"We are looking for you — all Iowans — to weigh in on this process," Reynolds told fairgoers during the reveal Thursday.