Box-office hits like 'Star Wars' and 'Wonder Woman' now have a shot at the Oscars. The Academy announced Wednesday that it will start acknowledging popular films in future broadcasts.

The Academy of Motion Pictures Arts and Sciences said Wednesday it is creating a new category to honor “achievement in popular film.”

Will "Black Panther" (starring Chadwick Boseman) be shut out of best picture consideration at the Oscars?(Photo: MARVEL STUDIOS/DISNEY VIA AP)

The Oscars are shaking things up in a big way.

On Wednesday, the Academy of Motion Picture Arts and Sciences announced it will acknowledge the impact of major blockbusters in future broadcasts.

That's right: For once, box-office hits like "Star Wars" and "Wonder Woman" actually have a shot.

"Change is coming to the #Oscars," the Academy tweeted. "Here's what you need to know: A new category is being designed around achievement in popular film."

The Academy confirmed that a film could be eligible for an Oscar in the new "popular" category as well as best picture. Details are still being finalized for the category, which will be introduced at the 91st Oscars telecast on Feb. 24, 2019.

"We have heard from many of you about improvements needed to keep the Oscars and our Academy relevant in a changing world," Academy president John Bailey and CEO Dawn Hudson wrote in a memo sent to members and obtained by USA TODAY. "The Board of Governors took this charge seriously. We are excited about these steps, and look forward to sharing more details with you."

Flashback: It's time to create an Academy Award for best blockbuster

The Academy has a history of turning its back on blockbuster fare. As superhero franchises have taken over Hollywood, neither Marvel or DC films have been able to break into the awards, save for the technical categories.

The Oscars famously snubbed recent hits like "Wonder Woman," "Star Wars: The Force Awakens," "Deadpool," "Girls Trip" and "Finding Dory." (There are occasional exceptions: James Cameron's 2009 hit "Avatar" made it all the way to a best picture nomination.)

But backlash began brewing as soon as the plan to honor "popular" fare was announced.

#OscarsSoStupid: Why a best blockbuster Academy Award is a horrendous idea

"Oh, I see. We're going to make official the division where one kind of movie is popular and the other kind is good. That seems like a great idea, by which I mean: what a disaster," wrote NPR's Linda Holmes.

Oh, I see. We're going to make official the division where one kind of movie is popular and the other kind is good. That seems like a great idea, by which I mean: what a disaster.

"It will have the same effect as the Animated/Documentary/Foreign Language categories, where movies are essentially ghettoized from winning “the real award,” wrote Vox.com critic Todd VanDerWerff. "If a blockbuster is good, Nominate It For Best Picture."

The Academy literally = Will Forte as Kelly. pic.twitter.com/T3djwwkhc1

Many critics pointed out that seminal films like "Black Panther," Hollywood's groundbreaking African-American-led superhero blockbuster, could now be relegated to the new bucket of simply popular fare.

"This is a bad idea borne from fear of irrelevance but no real drive to change. Also you bring this in the year of Black Panther? Subtle," tweeted ScreenRant contributor Kayleigh Donaldson.

"As for a 'popular film' award, it is a ghetto and will be perceived that way. Imagine if they instituted it this year: "Oh, It's lovely that the rabble went to Black Panther -- here's a special fake Oscar it can win!" This is just a head-slapper on all counts," tweeted Vulture contributor Mark Harris.

As Hollywood's most esteemed film organization turned its back on popular fare, ratings for the Oscars plummeted.

Continuing a recent trend, ratings for this year's Jimmy Kimmel-hosted show dropped to a record low of 26.5 million viewers.

The previous record low of 32 million was set in 2008 when the drama "No Country for Old Men" won best picture, which came after an 11-week Hollywood writers' strike that crippled other awards shows.

"The movies highlighted at the Oscars are definitely one of the factors in ratings, especially when you have a movie like 'Titanic,' " says IMDb.com correspondent Dave Karger. "But I don’t feel it’s fair to lay all the blame on the decline of Oscar ratings on the movies. And it's a sad day when the Academy panders to hits just to get higher ratings, which is a bit of my fear."

This year's broadcast also struggled with tone, as it grappled with both the #MeToo movement and the embarrassing 2017 fiasco where presenters Warren Beatty and Faye Dunaway flubbed the best-picture award by announcing that "La La Land" had won when the actual winner was "Moonlight."

But ratings problems are not limited to the Oscars. February's Grammy Awards on CBS dropped 24%, to 19.8 million viewers, while the Golden Globes drew 19 million on NBC in January, a 5% drop.

"It’s as much declining television ratings in general. The Oscars still are the top non-sports telecast of the year," says Karger.

On Wednesday, the Academy also announced that the show is moving up on the awards calendar. "We've set an earlier airdate for 2020: mark your calendars for February 9," it wrote. In addition, "we're planning a more globally accessible, three-hour telecast." (By contrast, the 2018 show clocked in at 3 hours, 50 minutes.)

In its letter to members, the Academy explained it will begin to "present select categories live, in the Dolby Theatre, during commercial breaks (categories to be determined). The winning moments will then be edited and aired later in the broadcast."

1928/1929 - 'The Broadway Melody' | Bessie Love and Charles King star in the musical that was the first sound film to win. Warner Bros.
Fullscreen

1929/1930 - 'All Quiet on the Western Front' | Lew Ayres, center, stars in the World War I epic based on the novel by Erich Maria Remarque. Photofest
Fullscreen

1930/1931 - 'Cimarron' | Richard Dix, left, stars as a newspaper editor who settles with his wife, Irene Dunne, in an Oklahoma boom town at the end of the 19th century. Photofest
Fullscreen

1932/1933 - 'Cavalcade' | The film, starring Clive Brook and Diana Wynyard, touched on historic events like the sinking of the Titanic and the death of Queen Victoria in a look at Londoners from 1899 through 1933. Photofest
Fullscreen

1934 - 'It Happened One Night' | Clark Gable and Claudette Colbert both won Academy Awards for their performances in this romantic comedy about a spoiled heiress who runs away and into the path of a reporter looking for a story. Sony Home Entertainment
Fullscreen

1937 - 'The Life of Emile Zola' | Paul Muni and Gale Sondergaard star in this film about the Dreyfuss Affair. Warner Home Video
Fullscreen

1938 - 'You Can't Take it With You' | Jean Arthur, left, Spring Byington and Lionel Barrymore star in this romantic comedy that also features James Stewart. Photofest
Fullscreen

1939 - 'Gone With the Wind' | Vivien Leigh and Clark Gable star in the Civil War sudser. Leigh won for best actress for her role as Scarlett O'Hara. Warner Bros. Pictures.
Fullscreen

1941 - 'How Green Was My Valley' | Roddy McDowall, left, and Walter Pidgeon star in this drama set in a Welsh mining town. 20th Century Fox
Fullscreen

1945 - 'The Lost Weekend' | Ray Milland, left, with Howard De Silva, won the best-actor Oscar in this gritty look at the life of an alcoholic. Universal Studios Home Video
Fullscreen

1946 - 'The Best Years of Our Lives' | Gladys George, left, Dana Andrews and Roman Bohnen star in this look at what happens when the boys come home in World War II. Photofest
Fullscreen

1949 - 'All The King's Men' | Broderick Crawford won the best-actor Oscar in this film about a corrupt politician. Columbia Pictures/Photofest
Fullscreen

1950 - 'All About Eve' | Anne Baxter, left, and Bette Davis face off in this drama about the world of theater. AMC
Fullscreen

1951 - 'An American in Paris' | Gene Kelly, left, and Oscar Levant romp through this musical romance. MGM via AFP
Fullscreen

1953 - 'From Here To Eternity' | Burt Lancaster and Deborah Kerr are caught in a classic moment from this war film set in Hawaii. Columbia Pictures
Fullscreen

1955 - 'Marty' | Ernest Borgnine, with Betsy Blair, won the best-actor Oscar for this film about love among the lonely. Photofest
Fullscreen

1956 - 'Around the World in 80 Days' | David Niven, left, and Robert Newton star in this film about a worldwide adventure. Warner Bros. Entertainment
Fullscreen

1957 - 'The Bridge on the River Kwai' | Alec Guinness, center, won the best-actor Oscar for this film set in a Japanese POW camp. Columbia/TriStar
Fullscreen

1960 - 'The Apartment' | Shirley MacLaine and Jack Lemmon both were nominated for Oscars for their performances. United Artists
Fullscreen

1962 - 'Lawrence of Arabia' | Omar Sharif and Peter O'Toole star in this story of conflicted loyalty during wartime. The Kobal Collection/Columbia
Fullscreen

1965 - 'The Sound of Music' | Julie Andrews sings her way through this musical based on the real Von Trapp family singers. 20th Century Fox
Fullscreen

1966 - 'A Man for All Seasons' | Orson Welles, left, stars with Paul Scofield, who won the best-actor Oscar. Columbia Pictures/Photofest
Fullscreen

1967 - 'In the Heat of the Night' | Lee Grant and Sidney Poitier star in this drama about a murder in a racist Southern town. Photofest
Fullscreen

1970 - 'Patton' | George C. Scott won an Academy Award for his performance as the World War II general but refused to accept it. 20th Century Fox
Fullscreen

1975 - 'One Flew Over the Cuckoo's Nest' | Jack Nicholson won the best-actor Oscar in the film version of Ken Kesey's book. Fantasy Films
Fullscreen

1976 - 'Rocky' | Sylvester Stallone wrote and starred in this story of an underdog boxer. Photofest
Fullscreen

1978 - 'The Deer Hunter' | Robert De Niro stars in this film about the way the Vietnam War affects the lives of people in a small town. Photofest
Fullscreen

1981 - 'Chariots of Fire' | Ian Charleson stars in this film about British track athletes training for the 1924 Olympics. Warner Bros.
Fullscreen

1982 - 'Gandhi' | Ben Kingsley, center (with Roshan Seth at left), won the best-actor Oscar for his role as the Indian leader. Columbia Pictures
Fullscreen

1985 - 'Out of Africa' | Meryl Streep was nominated for best actress for her performance. Universal Pictures
Fullscreen

2009 - 'The Hurt Locker' | Jeremy Renner, pictured, received a best-actor nomination but did not win. The film, however, won six Oscars, and Kathryn Bigelow became the first woman to win an Oscar for directing. Summit Entertainment
Fullscreen

2012 - 'Argo' | Ben Affleck produced, directed and starred in this best picture based on the real-life rescue of American embassy workers in Iran in 1980. Claire Folger, Warner Bros.
Fullscreen

2013 - '12 Years A Slave' | Lupita Nyong'o won the best supporting actress Oscar while Chiwetel Ejiofor received a best actor nomination for his performance in this wrenching drama based on the memoir of former slave Solomon Northup. Francois Duhamel, Fox Searchlight
Fullscreen 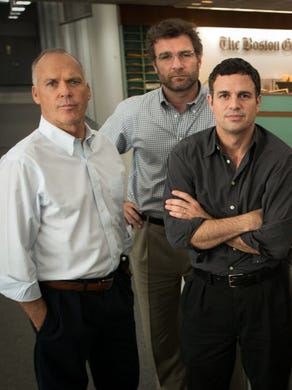 2016 - 'Moonlight' | In the wildest Oscar ending ever, 'La La Land' was erroneously announced as best picture. But in reality, the vote went to 'Moonlight,' the coming-of-age drama starring Mahershala Ali (left) and Alex Hibbert. The film won three Oscars, including best supporting actor for Ali and screenplay for director Barry Jenkins. David Bornfriend, A24
Fullscreen 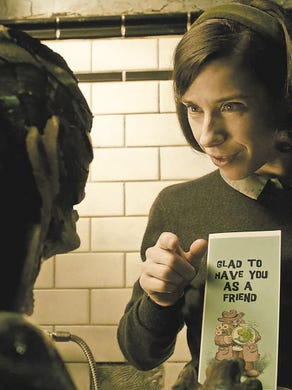