Shania Twain debuts 'Life’s About to Get Good' at Stagecoach

Shania Twain debuts 'Life’s About to Get Good' at Stagecoach

Shania Twain performs on the Mane Stage during the Stagecoach Country Music Festival. Country music's best-selling female artist played her new song, Life's About to Get Good, about an hour into her Saturday night set at Stagecoach. Omar Ornelas, The Desert Sun-USA TODAY NETWORK
Fullscreen

Califiornia's Stagecoach Festival marked its 10th anniversary Friday with country stars like Dierks Bentley, who looked like he was going to go Pete Townshend on his poor guitar. Omar Ornelas, The Desert Sun-USA TODAY NETWORK
Fullscreen

The Stagecoach Festival features open-air country music performances like this one by Maddie & Tae and is held at the Empire Polo Club in Indio, Calif. Omar Ornelas, The Desert Sun-USA TODAY NETWORK
Fullscreen

Cole Swindell checks in with the Stagecoach crowd during his Friday set. Omar Ornelas, The Desert Sun-USA TODAY NETWORK
Fullscreen 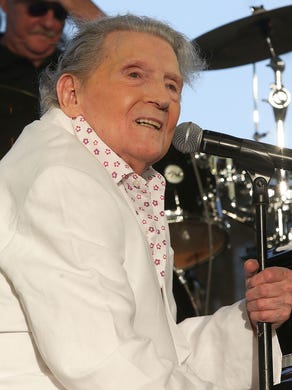 Danny Chauncey of 38 Special gets into the band's Friday set on the Palomino Stage. Frazer Harrison, Getty Images for Stagecoach
Fullscreen

Fans may have been hoping to spot Anderson East's girlfriend, Miranda Lambert, lurking around Stagecoach during his Friday set but no sightings were reported. Jay Calderon, The Desert Sun-USA TODAY NETWORK
Fullscreen

The Zombies' Rod Argent soaks in the scene during the band's set on the Palomino stage Friday. Christopher Polk, Getty Images for Stagecoach
Fullscreen

The Blasters break it down on Day 1 of Stagecoach. Jay Calderon, The Desert Sun-USA TODAY NETWORK
Fullscreen

Colin Blunstone of The Zombies sings during the Stagecoach Festival on Day 1. The festival runs from April 28-April 30. Jay Calderon, The Desert Sun-USA TODAY NETWORK
Fullscreen

A patriotic couple waits for the gates to open on Day 1 of the Stagecoach Country Music Festival at Empire Polo Club. Jay Calderon, The Desert Sun-USA TODAY NETWORK
Fullscreen 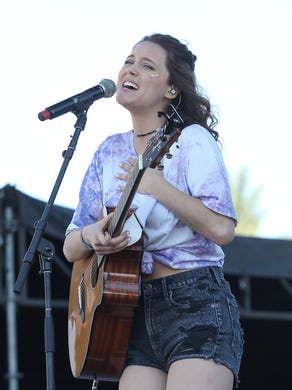 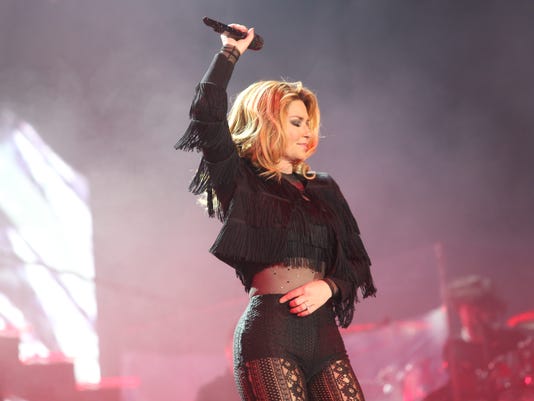 Shania Twain fans have been waiting 15 years for new music. The wait is over.

Country music's best-selling female artist played her new song, Life's About to Get Good, about an hour into her Saturday night set at Stagecoach.

"I wrote this specific song about the good and bad in life and how important it is to have both," the headliner said. "We got to take the good with the bad, right? No pain, no gain."

The song is expected to hit the radio in June and be part of a new album in September — her first since the release of Up! in 2002.

Twain opened the night with a bang, rising from beneath a double-sided staircase to open the set with Rock This Country.

A backdrop of a pink house changed to highway and city scenes as the singer, wearing a black fringe crop top and black lace pants, danced across the platform. At the end of the song, Twain raised both hands in the air before launching into Honey, I'm Home and You Win My Love.

"This is the party of the year for me," she said. "I don't get out much actually. I've been very busy in the studio making new music, being a mom, being a wife, all these other hats, so this is like my party night."

"It's kinda dusty around here on these grounds, so let's kick up some dust," she added before singing Whose Bed Have Your Boots Been Under?, I Ain't No Quitter and Love Gets Me Every Time.

Twain was light and spontaneous, laughing numerous times while singing and talking to the crowd. "I hate that you're so far away," she said before grabbing a necklace from a fan and asking for some "girl help" on Don't Be Stupid. She walked down and handed the microphone off to various front-row fans throughout the song.

She then announced a "very special moment" and brought out Kelsea Ballerini for Any Man of Mine.

"I really admire her talent, she is an incredible singer-songwriter," Twain said of Ballerini, who donned a sparkly black jumper.

Fans were delighted later in the set when Twain brought out yet another special guest, Nick Jonas, who helped her sing Party for Two.

"Shania Twain is the reason I'm in music today," Jonas said as he headed off stage.

Twain also sang the title tracks of her 1997 album Come On Over and 2002 release Up! ln between, she sat down with an acoustic guitar and played No One Needs to Know, which she said she wrote long before recording her first album, as well as I'm Gonna Getcha Good!

She then told the crowd they were going to get "a little reflective," before thanking fans for her first Stagecoach experience. 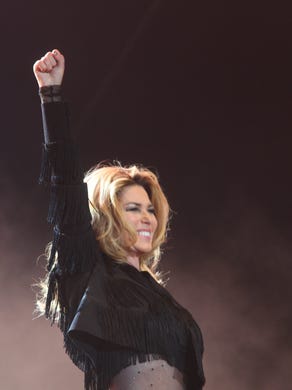 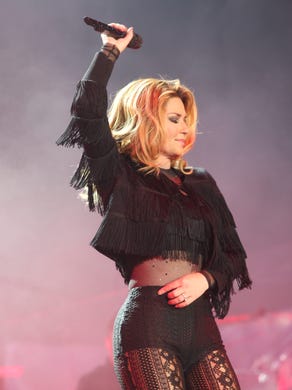 "I've learned through life so far that we have to just keep creating beautiful memories," she said. "I hope you remember this and take it with you."

She then sang two of her most iconic ballads, From This Moment On and You're Still the One.

Later in the set, she amped up the volume with Don't Impress Me Much and I'm Outta Here before lamenting that the night was coming to an end. To say goodbye, she told fans she'd never leave without playing Man! I Feel Like A Woman! and did just that.

Man, she is ready for a comeback.