At home with: Josh and Emily Hulling

Seven years ago, Josh and Emily Hulling were living in a quaint fixer-upper on 44th Street in Des Moines.

At home with: Josh and Emily Hulling 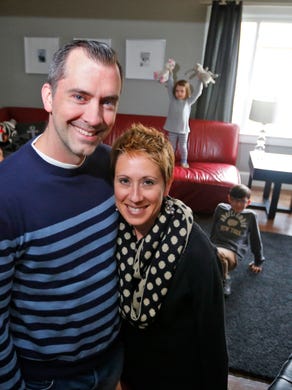 Seven years ago, Josh and Emily Hulling were living in a quaint fixer-upper on 44th Street in Des Moines. They had two young children and enjoyed taking walks around the quiet, family-friendly neighborhood. On these walks they regularly passed a large, unique-looking house, just a block away on the corner of 44th and Forest. Their curiosity was piqued when a For Sale sign appeared in the yard; the couple jumped at the chance to walk through it.

The house needed serious work. It had been divided into three apartments, had endured some interesting remodeling choices and several additions. But the Hullings had a vision for its potential and were easily wooed by the upgrade in square footage. They sold their little home, moved down the block, and like David, have spent the past 6.5 years tackling this Goliath, one project at a time.

Josh, 38, and Emily, 36, both grew up in Des Moines, not far from where they now reside. The couple's parents were friends before Josh and Emily were even born. They grew up together, married young, and now have four children of their own: Gavin, 10, Liam, 8, Tate, 5, and Sloane, 3.

Both Josh and Emily's parents were avid DIYers before the term "DIYers" even existed. Their dads were handy around the house and Emily's mom is very creative and crafty. "Our parents always made the most of what we had," said Emily. "My mom is the type who looks at something in a store and says, 'I could totally make that.' "

Their parents' examples of thriftiness and creativity influenced the way Josh and Emily viewed the house on Forest. Rather than hiring out all the work, they prioritized the projects that needed to be done and, with the help of friends and family, have turned the outdated, chopped-up house into a beautiful, spacious home.

Walking through the house today, it is hard to imagine what it once was. No room was left untouched. Walls were torn down, doorways were moved, floors and windows have been replaced, and every inch of wall and trim has been painted. Most rooms have been reconfigured, and wasted space has been repurposed.

The master bedroom now has a large walk-in closet which was once unusable space in an unusable bathroom. Josh's current project is finishing a master bath. "This house has 4 bathrooms, but only one was actually usable when we moved in," Emily explains, "We figured it was about time we had another working bathroom for a family of six!"

The Hulling's interior aesthetic is clean, modern, with a touch of vintage. Emily loves to shop CB2, IKEA, West Elm, and Target, but says some of her best finds have come from Craigslist. "Some people just do not realize what they have," she says.

One of her favorite pieces is a midcentury dresser that her mom found on the side of the road for $5. After a fresh coat of white paint, the revived dresser now serves as a sideboard in the Hulling's dining room.

A neutral pallet of gray, white and black is repeated throughout the house. Pops of red, yellow and orange brighten up the different rooms.

Emily works wonders with paint; giving new life to furniture, decorative items and even their old brick fireplace. She also has a knack for "free art" as she calls it: a napkin with a cool graphic print is framed in Sloane and Tate's room and an old, stained St. Louis Cardinals T-shirt is framed in the older boys' room.

The Hulling's frugal approach to furniture and decor helps them stay laid-back when it comes to the kids. "Kids are hard on stuff, whether or not they mean to be, they just are," Emily says. "With any major purchase we have to take into consideration how long it will last around here. We've had our leather couches for 15 years. Sure, I'd love to get something new, but they have lasted this long and I don't care if the kids jump on them or spill. I want them to be able to relax and live in their own home." Emily even admits, the reason there is no coffee table in the living room is so the kids have space to jump off the couches and wrestle.

After almost 7 years and countless projects, Josh and Emily are pretty burned out on DIYs. They look forward to spending the next several years enjoying the long-awaited fruits of their labor.

Check out Emily's blog: www.recoveringforest.wordpress.com, for more details on many of the projects pictured here.