The Iowa Environmental Council said the state needs to reassess its approach to cutting nutrients that leave the state and contribute to the Gulf dead zone.

In early 2018 the Iowa Legislature took a step in addressing Iowa's water quality with a plan to reduce nitrogen and phosphorous levels by 45 percent.

It could take Iowa hundreds, potentially thousands of years to reach its goal to cut by 45% the nutrients that contribute to the Gulf of Mexico dead zone, according to a new report.

The Iowa Environmental Council said Tuesday the state needs to reassess its approach to cutting nitrogen and phosphorus levels that leave the state and contribute to the Gulf dead zone, an area the size of Massachusetts this summer that's unable to support marine life.

"The rate of implementation we have now does not reach the nutrient reduction goals in any kind of timely fashion," said Ingrid Gronstal Anderson, the council's water program director.

"We're talking hundreds to thousands of years at the current rate to get to the goals of the nutrient reduction strategy," she said. "We need to look at doing things differently to scale things up."

The state adopted the Iowa Nutrient Reduction Strategy in 2013 to cut the nitrogen and phosphorus levels from places such as wastewater treatment plants, factories and farms. 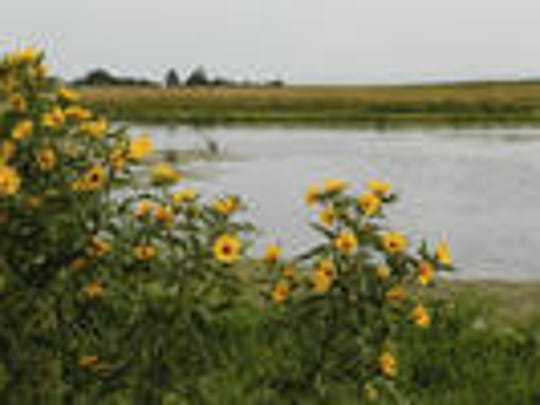 Iowa farmers will be looking to incorporate more conservation practices to improve water quality, with a new federal grant. Practices include wetlands, such as this one created as part of a pilot drainage project near Gilmore City. File photos taken Thursday, Aug. 27, 2015. (Photo: Zach Boyden-Holmes/The Register)

Agriculture has come under intense scrutiny for its role in adding to the dead zone, since its participation in meeting nutrient reduction goals is voluntary.

The money available for conservation practices such as building wetlands and bioreactors to filter and clean water will increase annually.

"We're just beginning to see the impact of those dollars," Naig said. "We're really focused on ramping up."

Last year, the state reported that public and private investment in "nutrient reduction-related" practices reached $512 million, the Environmental Council said. But most of the money was payments to farmers for participating in Conservation Reserve Program and other federal initiatives.

Only about $17 million was spent on "Nutrient Reduction Strategy-focused" initiatives such as building wetlands and bioreactors, and planting cover crops, the group said.

Even with increasing funding, it's a small amount compared to the cost to address nutrient pollution, the Environmental Council said.

The state strategy estimates it could cost up to $1.2 billion annually to meet its goals.

Under the state's current rate of adoption, the Environmental Council says it will take:

A study shows that nitrates in drinking water may be tied to 300 cases of cancer in Iowa each year. Des Moines Register

The Environmental Council said the state needs to consider "mandatory participation" for farmers, choosing from a broad suite of conservation practices.

"Requiring basic standards of care to reduce nutrient pollution would level the playing field among agricultural producers," the group said.

Farmers could tap incentives to help meet the mandate through an increase in the state sales tax, the council said. About 60% of Iowans supported a constitutional amendment in 2010 creating a natural resources and outdoors fund, but lawmakers have failed to pass a sales tax to fill it.

Increasing the sales tax three-eighths of one cent would raise nearly $188 million annually.

The council said the state's success in meeting the strategy's goal is questionable.

A University of Iowa study last year said nitrogen pollution flowing from Iowa to the Gulf of Mexico has grown by close to 50% over nearly two decades.

Donnelle Eller covers agriculture, the environment and energy for the Register. Reach her at deller@registermedia.com or 515-284-8457.