During the Sep. 2, 2020 news conference, Gov. Reynolds discusses her decision to close bars in the six counties with an increase in COVID-19 cases. Des Moines Register

When Joe Reilly looks at the downtown business community he sees an ecosystem — intricate, difficult to replace and — in recent months — under increasing strain from the coronavirus.

Iowa City bar owners were dealt another setback Aug. 27 when Gov. Kim Reynolds ordered bars in six counties to close to slow the growing number COVID-19 cases in those areas.

"There aren't people just waiting in the wings to take these spots," said Reilly, the "nighttime mayor" for the Iowa City Downtown District. "(If they close) there's not a bunch of people with a whole bunch of money saying, 'I'm going to jump right into that spot.'"

It is the second round of closures for bars in Johnson and five other counties — Black Hawk, Dallas, Linn, Polk and Story. Reynolds previously had closed bars across the state from March to June. Restaurants are allowed to continue operating, although they must stop serving alcohol at 10 p.m.

The order will last until at least Sept. 20 and affect some Iowa City businesses that were able stay open during the first shut down.

That's because the state has tightened the rules: A businesses must generate at least 50% of its revenue from food sales to qualify as a restaurant and remain open.

Reynolds defended the closures during a Wednesday morning news conference, citing rising cases among young people, and the failure of bars to enforce social distancing rules. The governor's order targeted the counties that a home to Iowa's three public universities.

She also said many bars had ignored repeated requests that they abide by the rules, and warnings that the state would take action against them if they did not.

But business owners said they were caught off guard by the announcement, which gave them just six hours to close their doors for 24 days.

"We're just not getting really strong leadership or enforcement," Reilly said. "And when there is a decision it's very reactionary and it's hurting a lot of people." 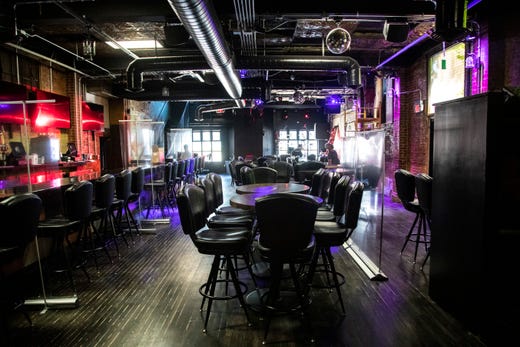 Barriers are placed between seating areas and along the bar to help stop the spread of the novel coronavirus prior, Thursday, July 23, 2020, at Elray's Live & Dive, 211 Iowa Avenue, in Iowa City, Iowa. Joseph Cress/Iowa City Press-Citizen
Fullscreen 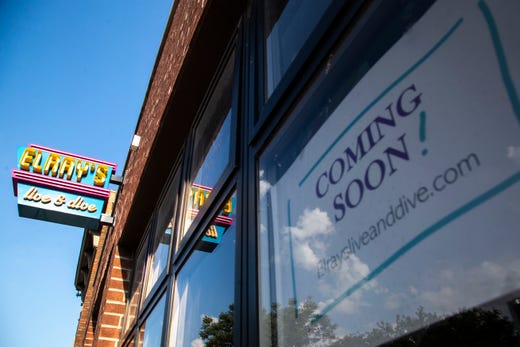 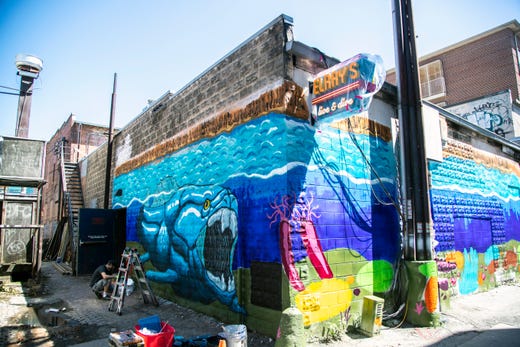 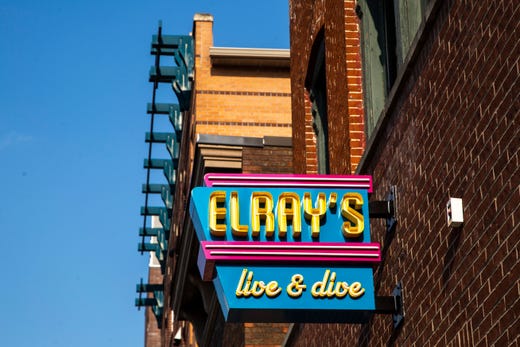 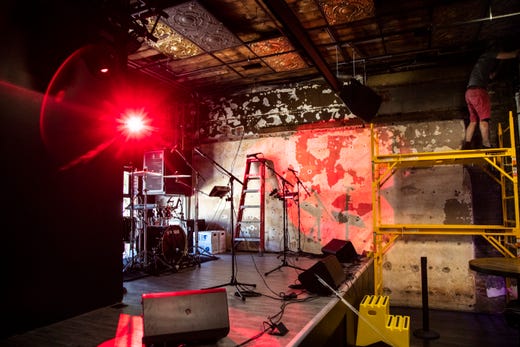 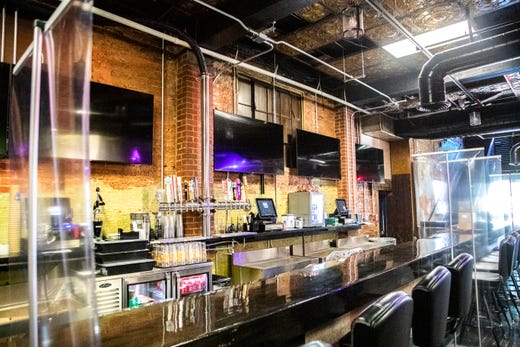 Barriers are placed between seating areas and along the bar to help stop the spread of the novel coronavirus prior, Thursday, July 23, 2020, at Elray's Live & Dive in Iowa City, Iowa. Joseph Cress/Iowa City Press-Citizen
Fullscreen

Barriers are placed between seating areas and along the bar to help stop the spread of the novel coronavirus prior, Thursday, July 23, 2020, at Elray's Live & Dive in Iowa City, Iowa. Joseph Cress/Iowa City Press-Citizen
Fullscreen 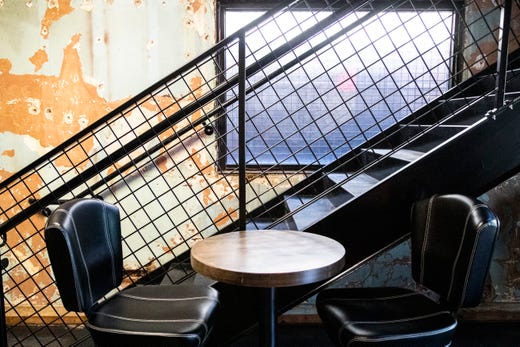 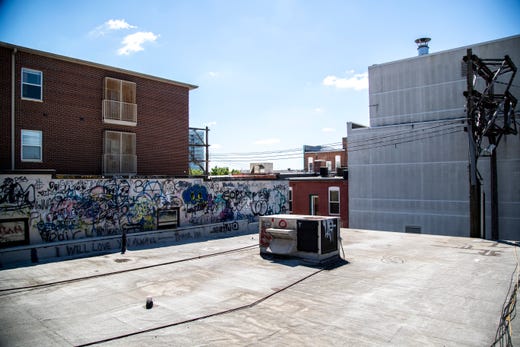 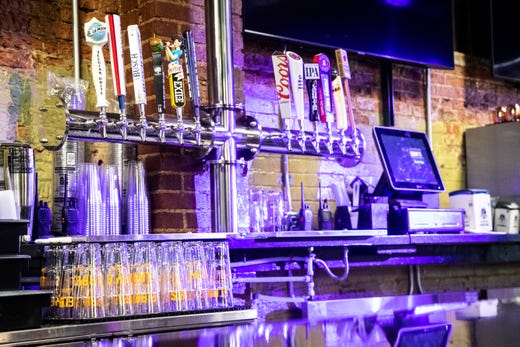 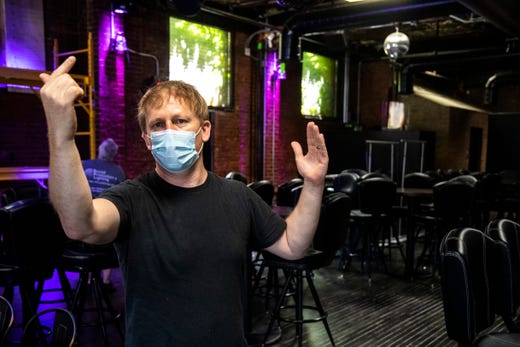 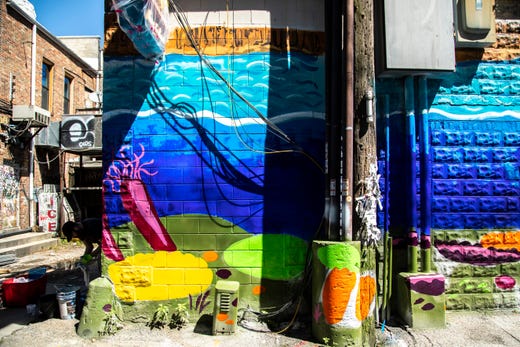 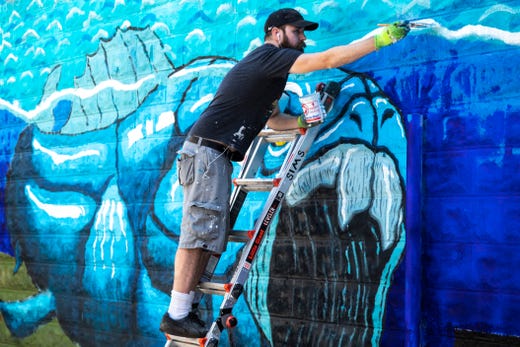 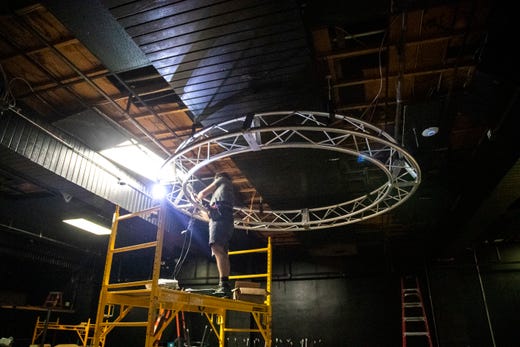 Sound equipment gets installed in a performance area at the back of the establishment prior to opening, Thursday, July 23, 2020, at Elray's Live & Dive in Iowa City, Iowa. Construction on areas of the business will continue following its opening. Joseph Cress/Iowa City Press-Citizen
Fullscreen 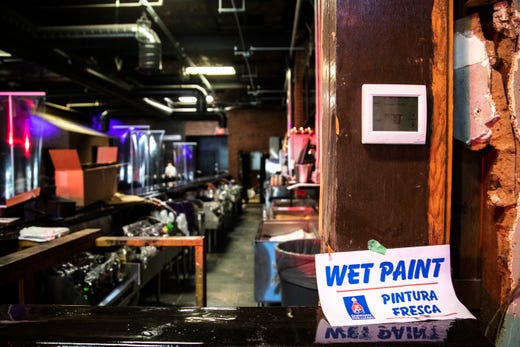 A mural is painted on the side of Elray's Live & Dive, Tuesday, July 7, 2020, in Iowa City, Iowa. Joseph Cress/Iowa City Press-Citizen
Fullscreen

'Our homes are on the line, we’re racking up debts.'

Bob Franklin, the owner of Elray's Live & Dive, has had a particularly rough go of things this year. Franklin announced plans in January to open the music venue in the former Blue Moose Tap House.

He was initially shooting for a May opening, but as the COVID-19 pandemic took hold locally he pushed it back, eventually opening July 23. In hindsight, Franklin says he should have held off even longer. He's watched his business, and many local businesses, bleed money.

“My industry gave up on the idea of making any profits this year back in March," he said. "We don’t get to walk away from our businesses due to legal obligations. Our homes are on the line, we’re racking up debts."

Franklin said he went above and beyond on safety measures. He purchased plastic dividers, separated tables and opened the second floor of the building — which he'd originally intended to hold off on — to allow for a greater social distance, all while operating at one-third capacity.

"When the investigators came back they said, ‘Elray’s does a great job, others can take what they're doing and use it in their bars,'" division spokesperson Jake Holmes said.

Nonetheless, many business owners, like Franklin, who sank thousands into safety precautions are now forced close.

“It does feel a little frustrating when the blame seems to begin and end with your industry sometimes," he said. "What ended up happening was decisions were made and there was no coordination — there were no good choices and thus nobody had good consequences.”

During this period of closure, he's hoping the university, the city and the state will sit down with business owners to formulate a road map for how bars can reopen and stay open.

“As a community, we can sit down and have a better holistic approach and reduce some of the stress animosity and some of the financial impact," he said. “We’re getting the worst of all worlds and it’s because we’re not doing what Iowans do best, which is talk, communicate and help your neighbor.”

When Franklin reached out to the UI, he said there seemed to be interest in working together.

The Press-Citizen reached out to the university to ask whether it planned to work with local businesses affected by the closure order. The university said it did not have anything to announce at this point.

"We appreciate the efforts of our downtown partners, including the Iowa City Downtown District, the Iowa City Area Business Partnership, and the Better Together effort," wrote Anne Bassett, director of media relations for the UI. "Although we were disappointed that a few establishments chose to not follow public health guidance as the university began classes, the majority adopted policies to limit the spread of COVID-19."

Photographs and videos taken late last month in bar districts near Iowa State University in Ames and the University of Iowa in Iowa City — among the communities recently cited as having among the fastest-rising infection rates in the nation — showed crowds of students crowded together in or outside of bars, not all wearing face masks. 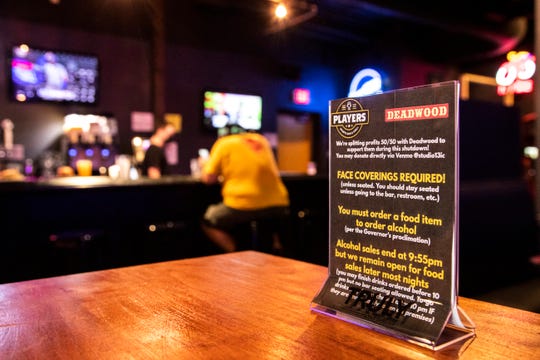 'What's the plan if we aren't allowed to reopen?'

On Wednesday, the governor announced an extension of the Iowa Small Business Relief Grant Program, making bars and breweries eligible for a one-time $10,000 grant to assist with short-term cash flow.

The program is funded through the national CARES Act approved by Congress earlier this year to help communities recover from the pandemic. The application period begins Sept. 10 and is open for two weeks. Businesses affected by the governor's closure order can apply.

“One of our goals since day one of this pandemic has been to provide appropriate and timely economic relief to the businesses most impacted by COVID-19,” Reynolds said in the release announcing the grant. “A business that is forced to close, even temporarily, means a business owner, workers and families are affected. This short-term program can help bridge the gap for those local businesses as we work to slow the spread of COVID-19.”

Though the grant isn't the direct coordination Franklin had hoped for, he is appreciative. However, $10,000 won't cover Elray's rent for the month, he said, much less other expenses such as utilities, insurance and payroll.

"Then what's the plan if we aren't allowed to reopen Sept. 20 and/or the restrictions on hours remain?" Franklin recently wrote. "There needs to be more targeted relief to keep the storefronts active and ready to re-emerge once allowed."

Without needed support and direction, Franklin fears a domino effect that ends up hurting the metro nightlife and downtown culture. 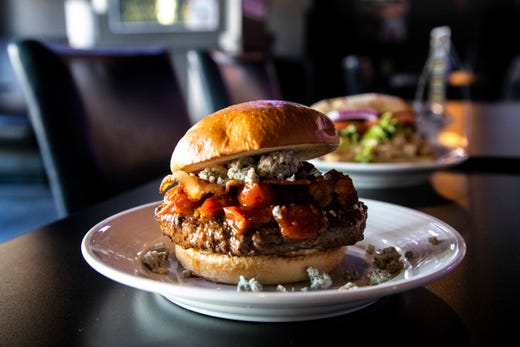 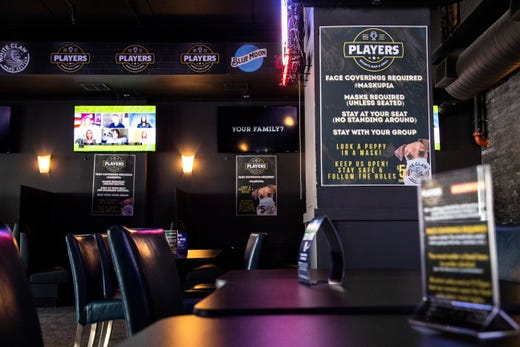 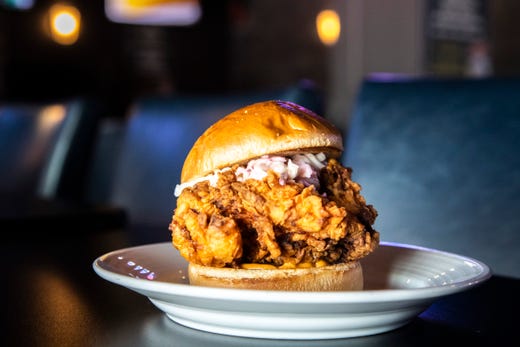 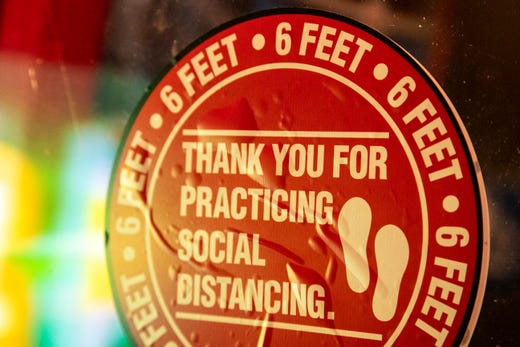 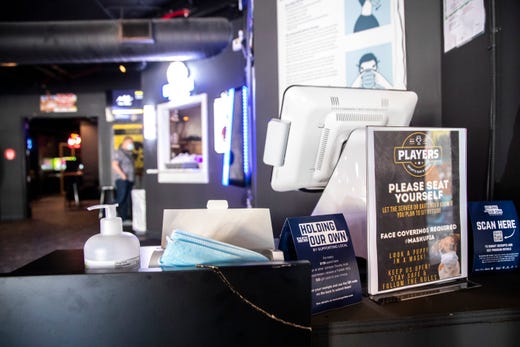 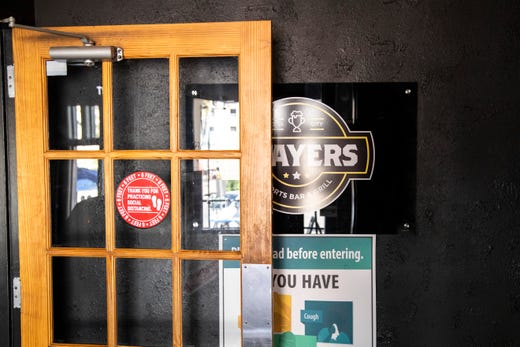 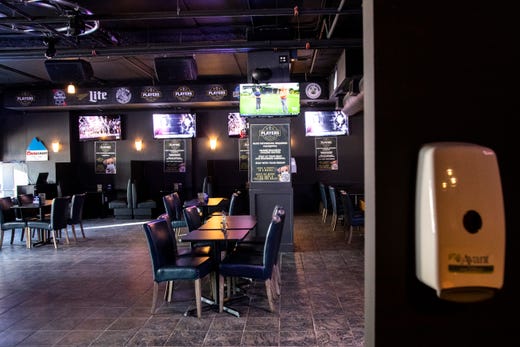 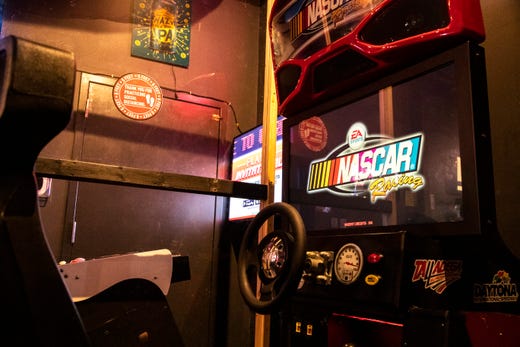 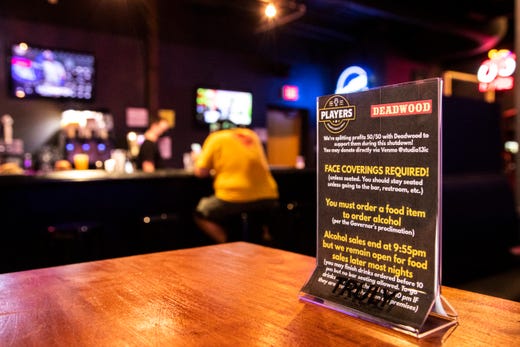 Of his four bars — which include Eden Lounge, the Yacht Club, and Studio 13 — only the newest, Players, has been able to remain open.

Zeman said the $10,000 grant might be sufficient were he running a bar in a rural area, but owning a bar in Iowa City is more expensive.

Operating out of Players, Zeman is also splitting his profits with Iowa City's Deadwood Tavern as it is one of the bars affected by the forced closure from the government over the coming weeks.

"The current situation has been even more difficult for people in my position as we must balance safety with the necessity to pay bills, employ our staff and try not to deplete our reserve funds," Zeman noted. "Small businesses are also spending more on safety and compliance with new regulations increasing the pressure that makes a surprise shutdown, as happened last week, even more difficult."

Like Franklin, Zeman said he has been frustrated with the lack of direction and leadership statewide and locally. At one point during the summer, Zeman voluntarily closed his bars as COVID-19 numbers were beginning to rise. Now, in spite of his own attempts to go above and beyond the rules, new restrictions have forced closures again.

"I feel the lack of both communication and enforcement were and are the biggest issues. There seems to be a different set of rules for bars and restaurants depending on where they are in the state," Zeman wrote. "For all of the time the university had to create a plan, they seem to not have had an effective one and the state seems to have decided to shut down all bars rather than enforce the rules on the few problem ones."