Mandelbaum Properties on Monday won the right to build an apartment tower near Court Avenue.

Two developers have submitted bids to replace a city-owned parking garage near Court Avenue. The fate of the projects now rests with the Des Moines City Council. 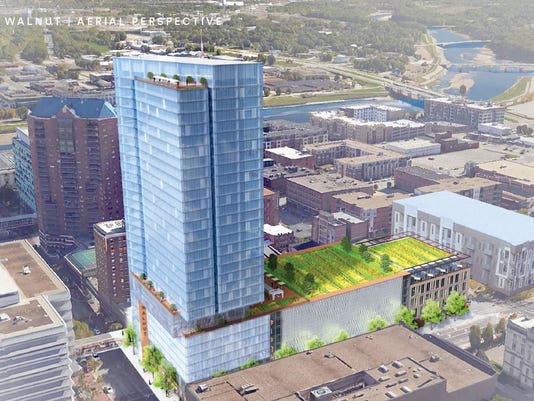 Mandelbaum Properties wants to build this 32-story development at Fifth Avenue and Walnut Street in downtown Des Moines. The project, which would include apartments, a hotel, a movie theater and a parking garage, is one of two proposals for the city-owned site.(Photo: Mandelbaum Properties/Special to The Register)

Des Moines' downtown tower duel ended as abruptly as it started Monday with a behind-the-scenes deal.

Mandelbaum Properties on Monday won back the right to build an apartment tower near Court Avenue after a surprise announcement from rival developer Blackbird Investments, which said it was withdrawing its recently submitted proposal for the same site.

Hours later, the Des Moines City Council voted to sell the property at Fifth and Court avenues to Mandelbaum, but with new timelines that require all aspects of the project to break ground by October 2019. A previous agreement would have given Mandelbaum until 2028 to finish the 32-story, $111 million development.

Justin Mandelbaum, a principal with Mandelbaum Properties who has been working on the proposal for more than two years, only to recently see it in jeopardy, had a wide grin on his face when he addressed the City Council Monday.

"The most important thing to us is making sure we deliver a project that can get done," he said.

Blackbird's surprise exit marked the end of an unprecedented, and at times contentious, showdown between the two developers. Never before had Des Moines seen two firms compete head-on for a city-owned property in such a way, let alone two skyscraper developers, city officials have said.

Mandelbaum had been working for nearly two years on his proposal to redevelop a decommissioned city parking garage at Fifth and Court avenues. He was preparing to close the deal last month, when Blackbird made a last-minute bid to acquire the property.

Days later, Blackbird appeared to gain the upper hand when city planners picked its proposal over Mandelbaum's. Just hours before the City Council was scheduled to make the final decision, a deal was reached where Mandelbaum changed parts of its proposal, with Blackbird bowing out.

In an emailed statement, officials with Blackbird said they decided to scrap their proposal because Mandelbaum agreed to faster timelines and a larger hotel as part of his project.

"Upon the inclusion of these elements added by Mandelbaum Properties, we are satisfied with what the project has turned out to be," the statement said. "We have chosen to withdraw our proposal because our objectives have been met by the city receiving a better overall agreement. We wish the best for Mandelbaum Properties and look forward to seeing the completed project."

Mandelbaum's proposal calls for an apartment and hotel tower facing Walnut Street, a movie theater facing Court Avenue and a parking garage in the middle of the block. 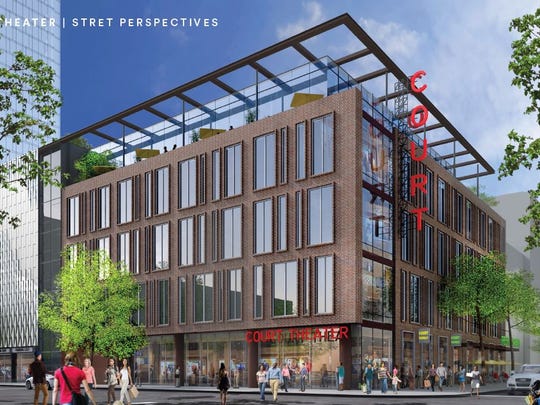 The updated agreement approved Monday gives Mandelbaum the option to build a hotel along Court Avenue in place of a theater. The hotel must be at least 150 rooms if built on Court Avenue and at least 84 if built on Walnut as part of the tower.

Previously, the agreement called for a 50-room hotel.

Under the new deadlines approved Monday by the City Council, Mandelbaum must:

Mandelbaum said he intends to beat the deadlines.

"We are highly motivated to deliver this project as quickly as possible," he said.

City Councilman Chris Coleman said he had "buyer's remorse" about the original agreement, which gave Mandelbaum until 2028 to finish the project. He said the new deal "tilts the leverage back to the city."

City Councilman Bill Gray said he hopes the tower will be around for his great-great-grandchildren to see.

"It's going to be a hallmark for Des Moines," he said. 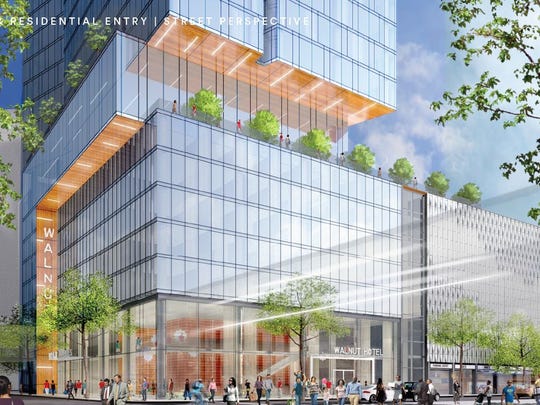 "I think in the long run, that has been extremely positive because you ultimately ended up with a better project," she said.

During a public meeting last month, Mandelbaum argued that Blackbird could be challenging his proposal simply as a way to reduce the competition for Blackbird's other proposed skyscraper.

Blackbird plans to build a 33-story apartment tower on the former Younkers building site at Seventh and Walnut streets.

From the start, officials with Blackbird said their Fifth Avenue proposal should be taken as seriously as Mandelbaum's. Justin Doyle, a principal with Blackbird, rebutted any notion that he made his proposal as a way to derail a competing project.

"I don't play for second place," Doyle told the Register last month. "We very much want to build this."