Historic Des Moines armory could be sold to private developer

The stone Depression-era building was added to the National Register of Historic Places in 1988.

Historic Des Moines armory could be sold to private developer

One of downtown Des Moines' historic civic buildings could be sold to a private investor and converted into apartments, retail space or corporate offices.

The Argonne Armory, 602 Robert D. Ray Drive, was built in 1934, the last of seven municipal buildings constructed along the Des Moines River.

Originally a National Guard training facility, it has served a variety of federal, county and city agencies over the years. The city's human resources, community development and IT offices are currently located there.

The armory is in need of significant repairs, city officials say. At the same time, East Village revitalization has made the 67,872-square-foot building more attractive to potential developers.

It sits on the east bank of the Des Moines River just north of City Hall and the Brenton Skating Plaza.

"The conditions around this building have changed dramatically in the last decade," said Erin Olson-Douglas, the city's economic development director.

And they will continue to change. Hubbell Realty Co. is building a $100 million neighborhood north of the armory site. The Bridge District will have 500 units once it's finished in four or five years.

"(Repairs) would be meaningful investments, but probably not the best use for the viability of the site long-term," Olson-Douglas said.

It's "one of the best examples of the Art Deco style in Des Moines," according to a site inventory analysis by the state's Office of Historic Preservation.

The armory was added to the National Register of Historic Places in 1988. 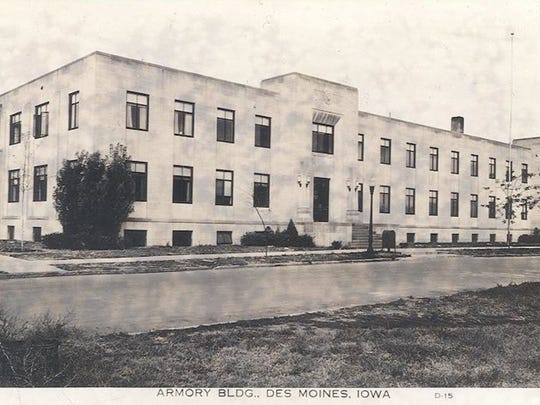 An historic photo of the Argonne Armory Building along the Des Moines riverfront. (Photo: Special to the Register)

"It's been deemed to be architecturally and contextually significant to the city; to understanding the story of how the city of Des Moines developed," said Steve Wilke-Shapiro, a Des Moines Rehabbers Club board member. "What makes buildings of that era so reusable is the quality of construction. They were built to last."

The armory originally had a dining room, kitchen, club room and a rifle range. The centerpiece was a two-story gym, known as the drill room, that had an elevated track and an adjoining stage with auditorium seating.

While the building's exterior has maintained its original character, the inside has been modified to accommodate city offices, complete with cubicles, fluorescent lighting and ceiling tiles.

A suspended ceiling separates the gym into two stories of offices, but a mezzanine between the floors reveals original Art Deco-style crown molding around the acoustic ceiling. 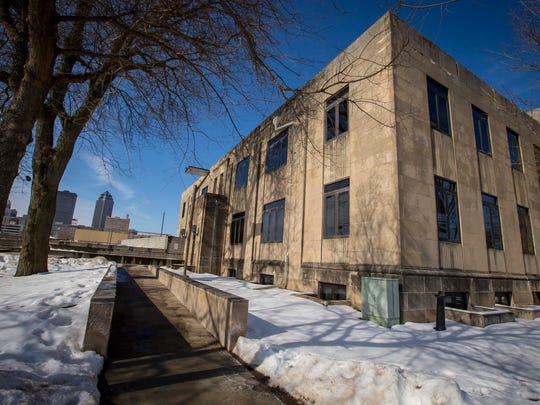 The building's condition gives potential developers a blank slate, according to several of the dozen developers who toured the facility Wednesday. The interior may be easier to re-purpose for modern-day use without having to maintain the historic integrity, they said.

The city has asked developers interested in the property to submit redevelopment concepts by March 30.

The City Council will then decide if it wants to sell the property or repair it for continued use as city offices. 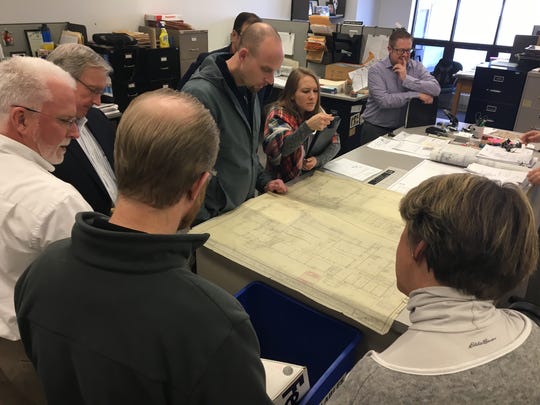 The city's request says development should be compatible with the East Village, which has a mix of offices, retail, restaurants, hotels, and entertainment and cultural amenities. Uses that help "activate the Riverwalk and downtown riverfront" are preferred, it says.

"A strong emphasis will be placed on the preservation of the Argonne Armory Building," Moffatt said.

Susan Judkins, client development director for RDG Planning and Design, said her firm plans to submit a proposal that would be compatible with a proposed water trails project along the Des Moines River. RDG is working on a study to make the river a recreational amenity with things like kayaking, fishing and white water rafting.

RDG envisions a mix of things there, including commercial, residential and office space.

"We think it really is connected to the future evolution of the Des Moines River as a recreation destination," Judkins said. She added the building is a "rare opportunity" to take advantage of one of the best river views in Des Moines.