Despite UI students' return, some of Iowa City's businesses are still hoping to survive 2020

The owners of Marco's Grilled Cheese, The Haunted Bookshop and Beadology talk about what the return of students has meant for their businesses.

Despite UI students' return, some of Iowa City's businesses are still hoping to survive 2020 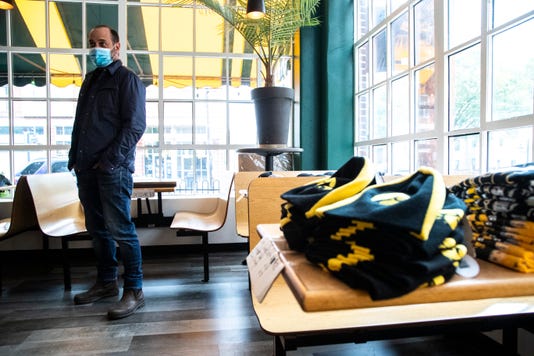 It's been three weeks now since in-person classes at the University of Iowa resumed. Four weeks since students began moving back into on-campus housing. And though the recent influx of tens of thousands more residents has brought a sharp rise in confirmed cases of COVID-19, the disease responsible for more than 1,200 deaths in Iowa since March, those new neighbors also represent a potential economic windfall for Iowa City's business owners whose bottom lines have been wreaked by the pandemic and a delayed fall football season.

But the question remains: Has that influx changed anything for the local businesses that have been struggling for months? The Press-Citizen asked just that of some of the downtown business district's mainstays:

The tables in Marco's Grilled Cheese are filled with Hawkeye merchandise, items owner Mark Paterno purchased as far back as December in anticipation of a 2020 football season that isn't scheduled to commence until the spring.

"At the restaurant itself (we're stable)," Paterno told the Press-Citizen. "Where we’re getting hurt is that there’s no cart activity now.”

Marco's Grilled Cheese opened on Dec. 9, 2019, at 117 N. Linn St. — a brick and mortar location that grew out of an Iowa City food cart that first opened on Cinco de Mayo, 2000. Paterno also owns the food carts Paco's Tacos and George's Gyro's as well as the aforementioned merch cart he typically sets up outside Kinnick Stadium on game days.

► Before the season was postponed: Iowa City plans to bar Melrose Avenue vendors from setting up outside Kinnick Stadium 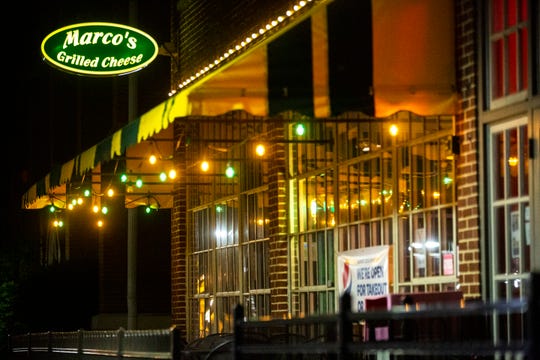 As the physical restaurant is a relatively new enterprise, Paterno doesn't have numbers to compare to the this time last year. He said he's doing well enough, though, and saw a 10% to 20% bump when students returned to town.

And, despite the pandemic, he's also getting ready to open something new directly next door to Marco's.

“I’d committed to the space two weeks before the virus really hit," he said. 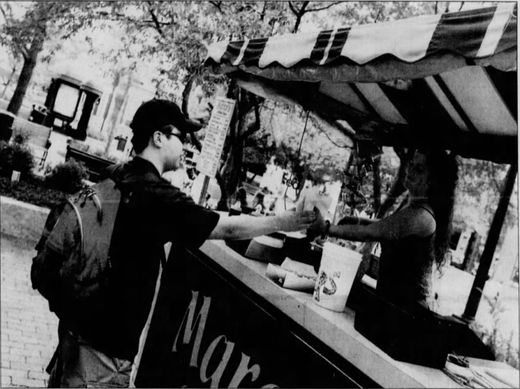 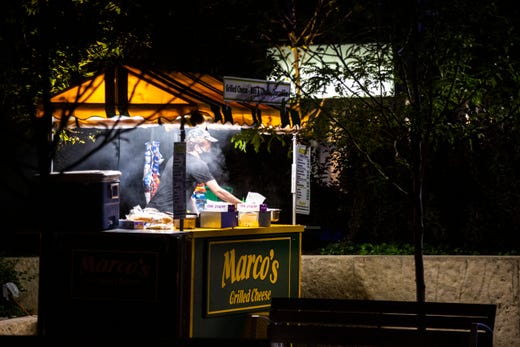 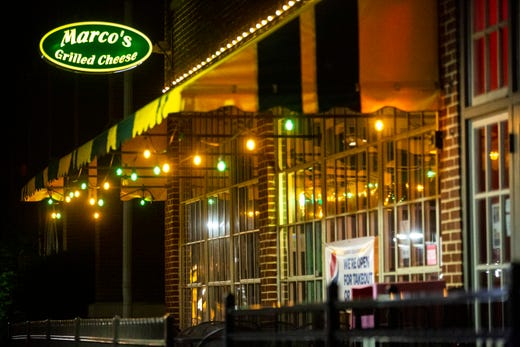 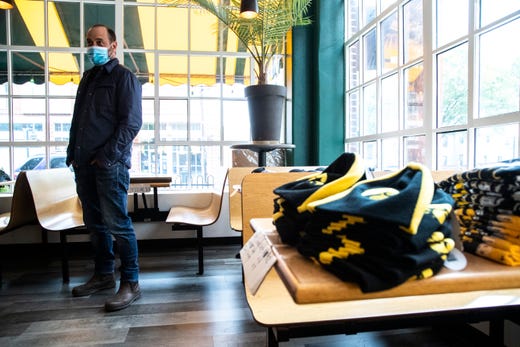 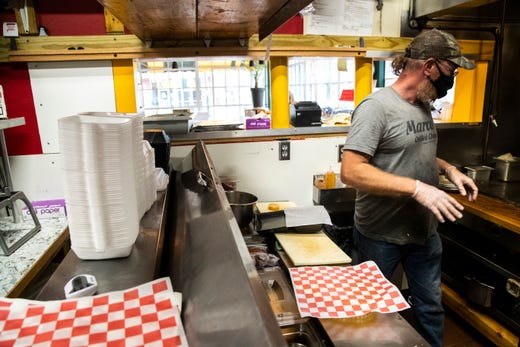 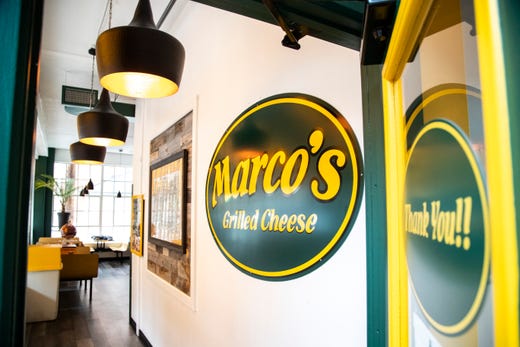 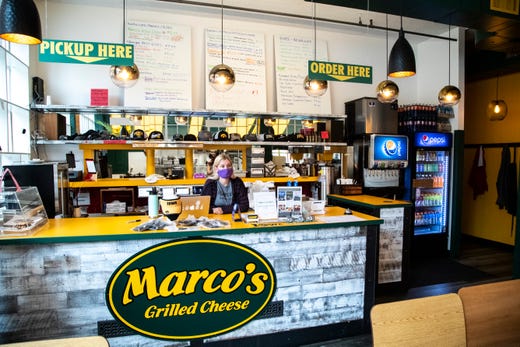 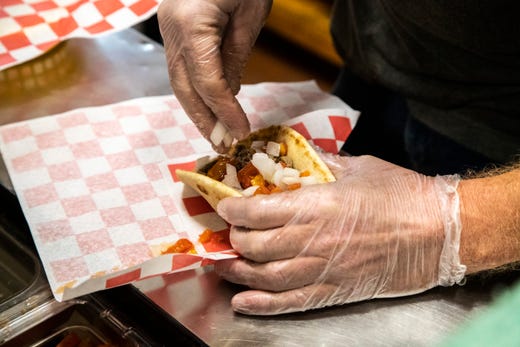 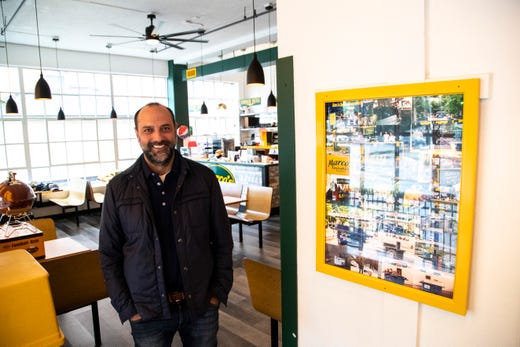 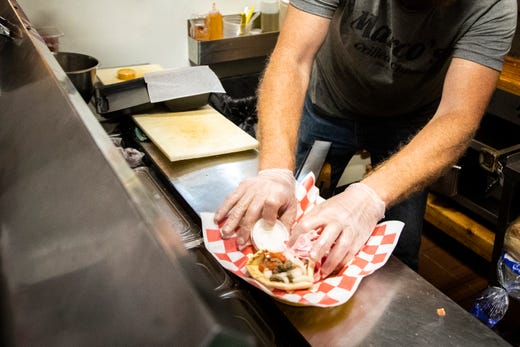 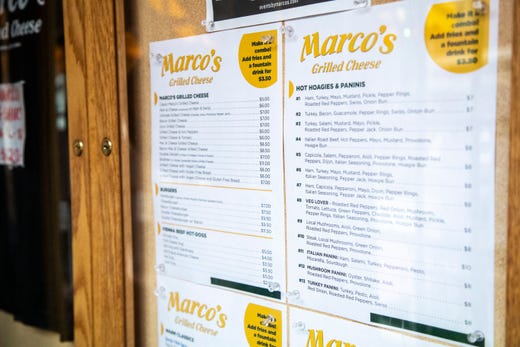 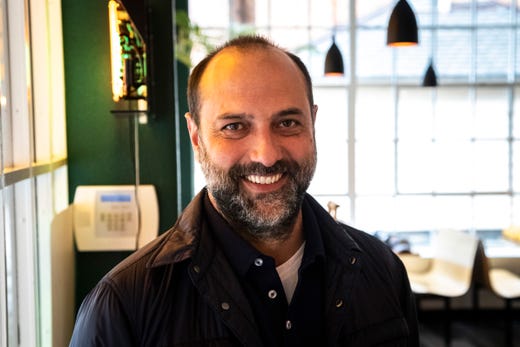 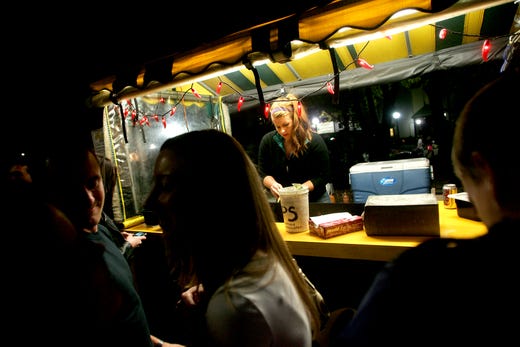 The 1,700-square-foot lot at 121 N. Linn is the former home of Chinese restaurant Bashu and, prior to that, the Linn Street Cafe.

The new venue — "Marco's Island," as Paterno referred to it — will focus on beach drinks, salads and offering a place for people to pretend they're not in Iowa City. The menu will be completely different from Marco's Grilled Cheese, Paterno said, and include beverages commonly found at beach resorts, like Pina Coladas.

Still, Paterno worries about the future for the city's downtown business district. With football canceled, and sit-down restaurant dining on the decline, what do businesses have to look forward to?

"I think we’re all just hoping to see a little bit of stability," he said, "or a plan or a light at the end of the tunnel."

The cats who call at The Haunted Bookshop home have struggled to get through 2020 along with the rest of us.

"The cats are very demanding of attention, and they’ve been just miserable these past few months," owner Nialle Sylvan observed. "One, in particular, has taken to going into one random part of the store and crying ... trying to get us to come back there and, once we do, starts headbutting our legs and making little kitten sounds."

Of course, the bookstore's problems have been more numerous than merely the resident cats' need for affection. While the business has been able to stay afloat through an online storefront, profits are down 75% from a typical year.

“What kept the ‘doors open’ — as it were — at the beginning (of the pandemic) was an absolutely ridiculous craze for Jigsaw puzzles," Sylvan recalled. "We must have gotten 20 or 30 phone calls a day for puzzles for a month there, which was a lot of fun, but the puzzles are only part of what we do.”

In the interim (puzzle sales have slowed down somewhat), Sylvan has also taken to displaying more of the store's stock online — approximately 10,000 of the bookstore's 50,000 manuscripts are listed there — and has also started putting together "Suprise Me" packs.

"(Customers) give us a budget and what they’re interested in and we pick their books for them," she said. "This has been an absolute smash hit; we’ve had so much praise for these."

Sylvan said they can fulfill requests as generic as "usually likes cozy mysteries" to as non-specific as "I like the color purple."

Unfortunately, she said, she hasn't noticed many who seem to be University of Iowa students show an interest in the program. In fact, Sylvan said, college students don't normally start trafficking her shop until October or so. It's around then that demographic begins to search for holiday gifts and starts to hang out with the cats inhabiting the bookstore.

Still, Sylvan's estimates undergrads account for 10% to 20% of the bookshop's sales, and graduate students make up another 30% to 40%.

For now, the store's website projects a plan to reopen the building's doors on Oct. 2, but the way things have been going, Sylvan isn't sure it's going to happen.

Not only has the number of new cases of COVID-19 risen sharply since students returned to town, Sylvan says she hasn't even always felt secure out in public, where many venture without CDC-recommended face coverings.

“We would like to be able to (open Oct. 2), but for various reasons, we need to be careful," she said. "I, for example, am a two-time cancer survivor, so for me, this is not a small threat.”

There's also the fact that a bookstore, by its nature, has a lot of surfaces to clean that individuals expect to be able to interact with. When the store does reopen, Sylvan says it will probably be by appointment, so as to more thoroughly limit the possibility that the virus spreads inside her store.

In the meantime, she's been thinking of ways to work around the building's 150-plus-year-old design to finally get Wi-Fi in the store. If that happens, she's thinking of making it so people can browse her shelves via Zoom.

One thing that has given Sylvan some hope over the past few months has been seeing how the Northside neighborhood has come together. In particular, she pointed to this year's Brewfest/Oktoberfest plans, which are helping to prop up northside businesses.

“The Northside neighborhood has pulled together over this in a way that I knew we had in us, but — oh my goodness — it’s just wonderful to watch, and I’m really proud of the businesses in my neighborhood.”

► More on Brewfest 2020: Organizers think outside the box to accommodate safety concerns amid a pandemic 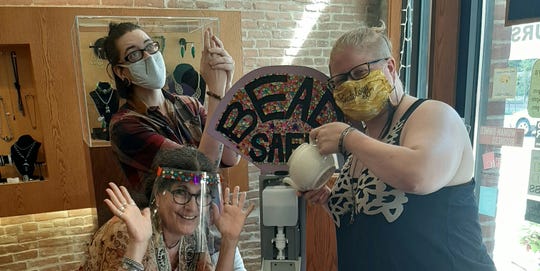 The staff at Beadology pose for a photo in the downtown Iowa City store during the 2020, COVID-19 pandemic. (Photo: Special to the Press-Citizen)

Likely among the Iowa City retailers least impacted by students' returns to town is Beadology.

Located at 220 E. Washington St., Kubby's Beadology has sold beads, jewelry and the like since 2008.

So far this year, Kubby said she's noticed more college-aged customers stopping by her shop, but as with so many businesses, she's still just trying to dig her way out of the hole so many have fallen into this year.

"We had one great month that made-up some ground for us.”

Personal shopper at Beadology in downtown Iowa City. (Photo: Special to the Press-Citizen)

The business has been helped along by the fact that Kubby used to be a grant writer and, early on in the pandemic, was able to tap into some grants to help the business stay afloat. While those grants have largely dried up, she also expressed her gratitude for the work the Iowa City Downtown District and Project Better Together have put in to helping businesses like hers weather this period of American history that's nearly without precedent.

Project Better Together is a conglomerate of Johnson County non-profits dedicated to helping the area's communities get through COVID-19. One of their methods cited by Kubby is the ongoing Shop Local gift card initiative.

“It hasn’t been half of any month or anything, but it has been critical in trying to fuel (the business)," Kubby said of the initiative. She said the income has helped her with regular expenses, like rent and payroll.

Like The Haunted Bookshop, her online storefront has become much more robust and necessary over the last six months. After being closed for two months early on, the store has reopened for in-person shopping with limited capacity, as well as using videos on Facebook and Instagram to show off the items the store has in stock.

Kubby said she's been careful about taking on loans and done her best to navigate the increasingly precarious nature of being a locally-owned business in 2020.

► Who got a loan through the Paycheck Protection Program in Iowa?Search our database.