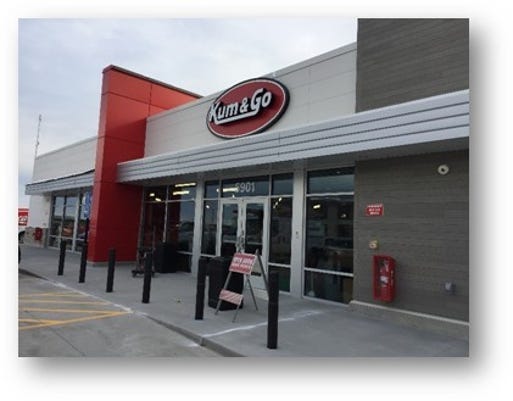 The latest store is at 5901 Mills Civic Parkway in West Des Moines in the Mills Crossing commercial development that also includes REI, The Container Store, and Caribou Coffee-Einstein Bros. Bagels.

The first 99 customers to visit the store when it opens at 6 a.m. will receive a coupon for a 99-cent whole pizza.

The 6,200-square-foot convenience store is the company’s new Marketplace design and includes an open kitchen, inside seating, heated patio, free Wi-Fi, charging stations and an expanded selection of freshly prepared foods. It will also feature a growler station where customers can buy beer.

Three of the stores — Johnston, Southwest Ninth and 50th streets — were replacements for older, smaller locations, said Kristie Bell, Kum & Go spokeswoman. The other three were new locations for the company, she said.

Kum & Go, which is moving its headquarters from West Des Moines to downtown Des Moines in early 2018, is building its larger Marketplace design for all new locations, Bell said. Those stores have more fuel pumps and fresh food, she said.

There are a few more store planned for the metro, possibly to be built next year, but dates and addresses haven’t been released, she said. Nationally, Kum & Go is opening stores through the end of this year in Oklahoma, Colorado, and Missouri, she said.

Kum & Go operates more than 50 stores in the Des Moines area and 430 in total across 11 states.