Artist Robert Indiana, creator of 'LOVE' series, is dead at 89

His attorney said he died Saturday of respiratory failure.

Artist Robert Indiana, creator of 'LOVE' series, is dead at 89

FILE - In this May 14, 2009 file photo, pop artist Robert Indiana, 80, poses in the kitchen at his home on Vinalhaven Island, Maine. An art buyer from Monaco has filed a lawsuit against Pop artist Robert Indiana, the sculptor known for his "LOVE" works. Joao Tovar filed the lawsuit against Indiana last week in Maine's Knox County Superior Court, claiming Indiana's actions made Tovar's investment in what he thought were the artist's works worthless. Tovar alleges that he purchased versions of those sculptures with the word "Prem" _ Hindi for love _ that he thought were created by Indiana and were worth $1.5 million. (AP Photo/Pat Wellenbach, file) Pat Wellenbach ASSOCIATED PRESS
Fullscreen

Artist Robert Indiana oversaw the installation of his three-ton, Corten steel LOVE sculpture on the plaza outside the Indiana National Bank building on February 14, 1972. The sculpture remained there for six weeks, then was moved to the Indianapolis Museum of Art, where it still stands. Born Robert Clark in New Castle in 1928, he changed his last name to Indiana because it's easier to make a unique contribution if you have a unique name." Tim Halcomb
Fullscreen

The walls of Robert Indiana's home in the former Odd Fellows hall on Vinalhaven are covered with variatons of the "LOVE" piece. Indiana hopes his new work "Afghanistan," depicting a map of Afghanistan at the center of a bull's-eye, will be shown publicly to inspire some, inflame others, but ultimately to help the United States win the war. STEPHEN M. KATZ BANGOR DAILY NEWS LIBRARY
Fullscreen 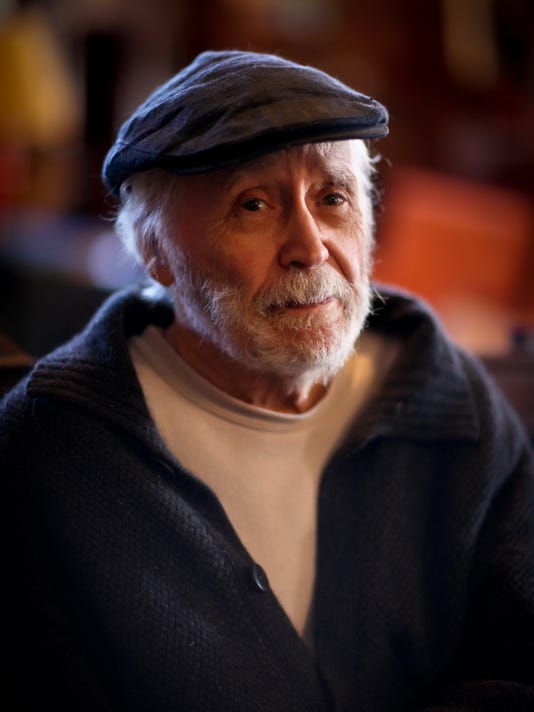 Artist Robert Indiana, best known for his "LOVE" series, has died at his Maine home. He was 89.

His attorney said he died Saturday of respiratory failure, the Associated Press reported.

Born Robert Clark, the artist spent his adolescence in Indianapolis. He attended Arsenal Technical High School and was offered a one-year scholarship to the Herron Art School in Indianapolis, but turned it down to join the Army Air Force.

He attended the School of the Art Institute of Chicago before moving to New York City, where he changed his last name to "Indiana" in 1958.

"I wanted a more distinctive handle, and my ties to Indiana are strong," he told IndyStar in 2014.

Our thoughts are with the family and friends of the beloved Robert Indiana. His Legacy of Love will continue to live on for generations to come as the original LOVE sculpture greets guests into the IMA Galleries. #RobertIndiana#Love, Robert Indiana (American, 1928-2018), 1970. pic.twitter.com/Iq0MI3fya8

He was a nominee for induction to the Naismith Basketball Hall of Fame in 2017. Indiana designed the Milwaukee Bucks' court used at the MECCA in 1978.

Since 1978, he's lived on Vinalhaven Island off Maine.

The Associated Press reports friends had recently expressed concern for his well-being because they hadn't heard from him in some time.

IndyStar reporter Will Higgins and the Associated Press contributed to this story.