There's a new baby seal at Blank Park Zoo. And you have a chance to name it.

The public can vote online until Thursday at noon.

There's a new baby seal at Blank Park Zoo. And you have a chance to name it. 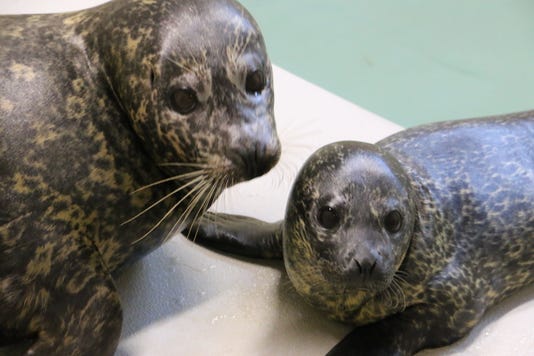 The Blank Park Zoo has a new harbor seal pup, born Aug. 3 to first-time parents Meru and Ross. He will be named in September after a naming contest.(Photo: Blank Park Zoo/Special to the Register)

The 30-pound baby was born to first-time parents Meru and Ross on Aug. 4. The zoo is asking the public to vote on five names submitted to the zoo during a naming contest.

The name finalists are: Go Go, Felix, Neal, Hudson and Monty. The public can vote online until Thursday at noon. The winner will be announced Friday.

Meru is an attentive mother so far, and Ross is spending time with his son before the family debuts in the main exhibit pool. The pup has adventured outdoors several times but has been "too shy" to swim in the main pool, the zoo said Tuesday.

After he was born, the pup spent several days with just his parents before the sea lions can re-enter the pool. The process takes a few weeks, the zoo said.

Both parents are nearly blind and were rescued in 2011 from the Pacific Ocean. Meru also has a paralyzed flipper and struggles to swim. 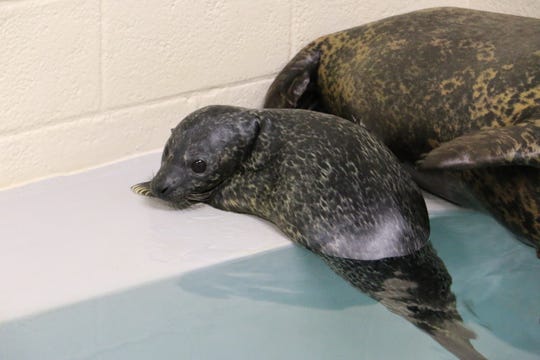 The Blank Park Zoo has a new harbor seal pup, born Aug. 3 to first-time parents Meru and Ross. He will be named in September after a naming contest. (Photo: Blank Park Zoo/Special to the Register)

The zoo said it hopes the seal pup will help bring attention to conservation efforts for his fellow aquatic animals, who are threatened by ocean pollution and over-fishing, which leaves little food for wild seals and sea lions.

Other animals, like rhinos, are part of the zoo's "species survival" efforts, and are bred in the zoo in attempts to counteract mass extinctions. But rescued seals with health issues like Meru and Ross serve as ambassadors to their wild counterparts, Bickel said.

"They serve as a way to tell people how their actions affect our oceans," Bickel said. People can help sustain marine life by reducing their water usage and use of plastic, and by only eating sustainable seafood, he said.

The zoo accepted name ideas with donations throughout August.

The nonprofit zoo uses donations to buy supplies, and gives a portion to groups that help wild animals.

"Food for seals and sea lions make up a huge portion — 30 percent — of the zoo's budget," Bickel said.

A new species has arrived at the Blank Park Zoo. Meet Kidomo, an endangered okapi. The Des Moines Register