People to Watch: How one of the youngest pastors in town became a leading activist for progressive issues

Minna Bothwell has become a local leader in activist spaces, but her core mission to lift up voices of marginalized groups starts at church.

People to Watch: How one of the youngest pastors in town became a leading activist for progressive issues 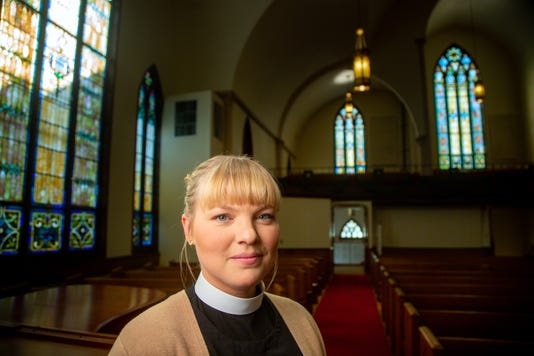 Halfway through a recent Sunday communion service at the diverse Capitol Hill Lutheran Church, the Rev. Minna Bothwell sat on the stairs at the front of the sanctuary, surrounded by a dozen kids from the congregation.

They gathered around a tray holding a loaf of bread and jars of peanut butter and jelly. Step by step, the kids patiently walked Bothwell through the process of making what she quipped was “probably the best PB&J ever.”

She said the sandwich, which she diced into enough pieces to be shared, was meant to represent a fundamental Christmas lesson: When one welcomes others, helps others and feeds others, they’re doing the same for Jesus.

One of the youngest pastors in the Des Moines metro and one of the Des Moines Register's 15 People to Watch in 2019, Bothwell has become a local leader in activist spaces confronting issues like climate change and gun violence. But her core mission to lift up the voices of immigrant and refugee communities, LGBTQ people and other marginalized groups starts at Capitol Hill Lutheran Church, in the gentrifying East Village neighborhood.

There, her roles as pastor, activist, wife, mom and artist converge to make her the inviting face of a congregation that hails from more than 20 countries around the world.

“I think a lot of people in my congregation have experienced oppression in their lives,” said Bothwell, 33. “And so we try very hard to walk alongside them.”

Get More: Support great storytelling with a subscription to the Des Moines Register 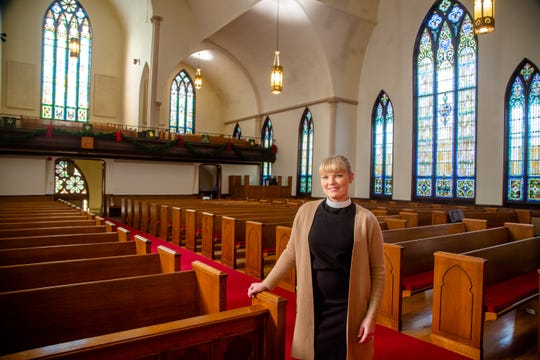 A pastor and 'chauffeur'

Regular services and events in the Nuer language accommodate the congregation’s South Sudanese refugees and their children. Roughly 2.5 million refugees have fled the country’s civil war that began in 2013. The estimated death toll in the humanitarian crisis is at least 382,000 people, says a new report funded by the U.S. State Department.

Services and Bible studies are also offered in Vietnamese. The church has previously held services in Kunama, spoken by people of the northeast African country Eritrea.

Bothwell’s peers say her commitment to Iowa’s refugees is unyielding. 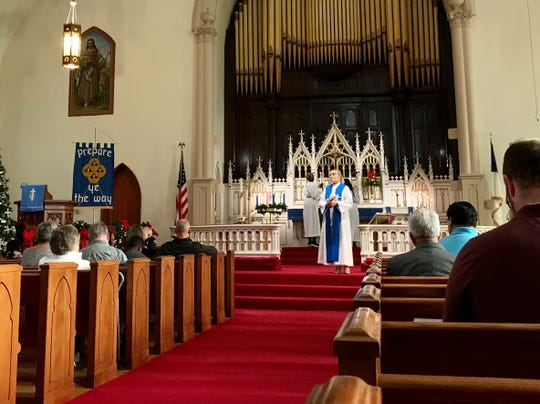 “In 2019, I expect to see her really standing out in the area of radical hospitality in working with immigrant and refugee populations,” said the Rev. Debbie Griffin, of Downtown Disciples. “And not just in doing one-time actions, but building relationships with people that don’t look like her or speak her language.”

Bothwell credits her congregation, especially it’s women, for rallying around one refugee they noticed was new to the church.

More: Read about other People to Watch

Bothwell drove the woman to and from her appointments at Iowa Justice For Our Neighbors and helped her fill out forms until she was granted asylum. In the car, the two easily maneuvered the language barrier in long discussions, she said.

“I was just a chauffeur, you know, but the women made her feel comfortable and they gave her space to be here, in whatever emotions she was feeling,” Bothwell said.

Erik Ullestad, CHLC’s minister of youth and music, said what he considers to be Bothwell’s strongest values — inclusion and belonging — help newcomers feel at home.

“It’s one thing to be welcome, but another thing to find yourself belonging, feeling at home and feeling like you have a place,” Ullestad said. “She works hard to make that happen.”

A small-town Iowan, artist and mom

Born and raised in the tiny eastern Iowa town of Ryan, Bothwell credits her parents and grandparents with teaching her the meaning of acceptance.

“There was always a sense of, 'It doesn't matter who it is, we welcome them and love them,'” she said. “That was really a part of the foundation of my childhood, and so I feel like I've carried that with me for a long time.”

Bothwell earned a bachelor’s degree from Iowa State University, where her focus was art, design and international studies. She’s commissioned several oil paintings, but said she doesn’t have much time to paint these days.

Rev. Minna Bothwell and her husband Nat Bothwell, also a pastor, welcomed daughter Ada in 2018. (Photo: Special to the Register)

“My husband bought me lots of canvases so that I will paint for our house,” she said. “But I haven’t started," she added, laughing.

Bothwell met her husband, Nat, at seminary, and the two had “the best first date ever.”

Nat Bothwell is the pastor at Bethlehem Lutheran Church in Slater, Iowa.

'People look to her'

It’s a “big struggle” to be heard as a young woman, Bothwell said, and pushback ranges from derogatory online comments to slights like being called “darling” or “kid” in conversations.

But that only fuels her fight for equality. 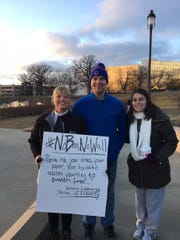 “I think about all the people who are of any form minority — who are black, or Latino or transgender — and how hard it must be for them to live in a society that doesn't listen to their voice,” she said. “And so, you just keep talking.”

She’s planned and participated in local events including National Gun Violence Awareness Day, the Women’s March, the Interfaith Prayer Service for Climate Action, and Lutheran Services of Iowa’s Lutheran Day on The Hill, among others.

CHLC partners with the Urban Bicycle Food Ministry of Des Moines to deliver burritos to the homeless, and with Lutheran Services of Iowa to host ESL classes.

“Often surrounded by people who’ve been doing this longer than she has, people look to her for her leadership,” Ullestad said. 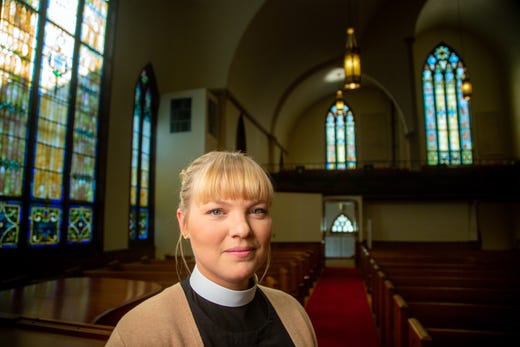 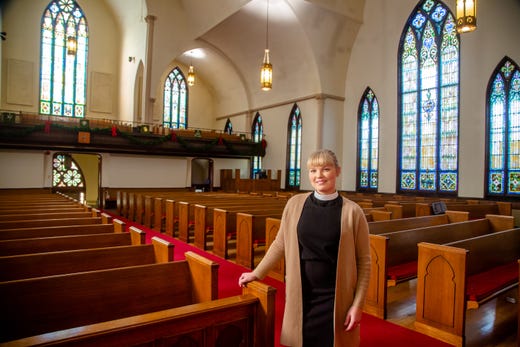 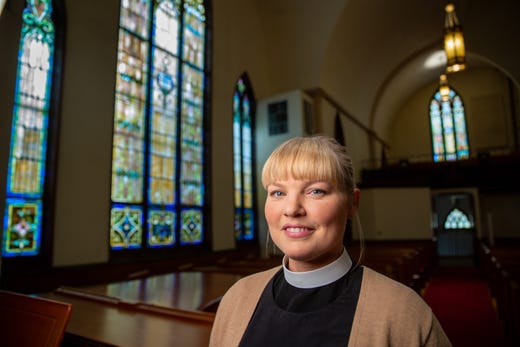 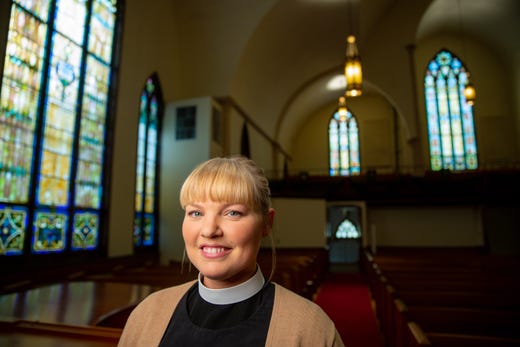 “The way Minna leads is just by being herself,” Griffin said. “I think other people are attracted to that and follow.”

The new year will bring renovations to CHLC, as some parts of the church are more than 100 years old. The upgrades will make the church more accessible by adding ramps and widening corridors, Bothwell said.

Meanwhile, Bothwell will continue to advocate for everyone in the margins of society, and knows her congregation will eagerly join her.

“Our understanding of the Christian faith encourages us to speak out against discrimination," she said, "and to speak up for the vulnerable and the oppressed."

The Des Moines Register's People to Watch in 2019. (Photo: The Register)

About 'People to Watch'

The Des Moines Register's "15 People to Watch in 2019" are movers and shakers, givers and doers. They were chosen by Register news staff from scores of reader nominations. Their stories will run through Jan. 6. To read about past People to Watch, visit desmoinesregister.com/peopletowatch.