On March 11 at noon, Kaiser will have a free event at the State Historical Society of Iowa Research Center, 402 Iowa Ave, regarding his new book. 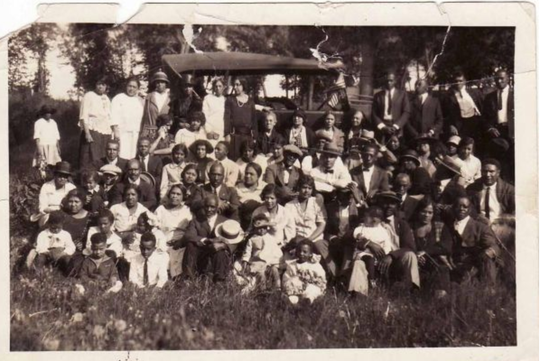 A 1930 photo from a gathering of the various members of three Grinnell-area African American families at Grinnell’s Arbor Lake. The image was used on the cover of "Grinnell Stories: African Americans of Early Grinnell." (Photo: Special to the Press-Citizen)

The demographic breakdown of Grinnell, Iowa, in black and white terms, is not that different from the state as a whole. Both have a population roughly 90% white and a scant 3.3%  African American.

Neither Grinnell nor the state as a whole are what one would consider bastions of Black history. So why did Daniel H. Kaiser decided to write a book about it?

"I taught at Grinnell College for about 30 years about Russian and East European history," said Kaiser. "But when I retired I realized I hadn’t paid much attention to the town I was living in.”

When Kaiser turned his eye to the town he lived in, it started with researching the architecture of the area, but as he dug deeper he realized there were dozens — hundreds — of stories from marginalized voices in the community. So, in 2015, he created the Grinnell Stories Blog.

“What I wanted to do was bring in people whose stories hadn’t been in the narrative and in particular, people of color," said Kaiser. "I’m a 74-year-old white guy, but nobody was writing about these people who were living here.”

Now a dozen of the stories Kaiser researched have been collected in a new book "Grinnell Stories: African Americans of Early Grinnell."

On March 11 at noon, Kaiser will have a free event at the State Historical Society of Iowa Research Center, 402 Iowa Ave, regarding the book. The lecture is called “Coloring the White History of an Iowa Small Town.”

The book is exactly what it sounds like. Going as far back as the mid-1800s, it recounts the story of Emma A. Morgan, a former slave who arrived in Grinnell around 1867 and reaches forward roughly 100 years, as the final chapter of the book stretches into the 1960s.

The stories, Kaiser points out, are those which are largely absent from Grinnell's own narrative as a city. Not only is there scant representation of these stories in the local museum, city celebrations like it's 75th and 100th anniversaries did not touch much on the African American population in small-town Iowa.

“The silence did not surprise me," said Kaiser. "But it’s not as though Grinnell had lynching mobs, there was nothing like that. But I did find out that there were stores in town that refused to serve African Americans." 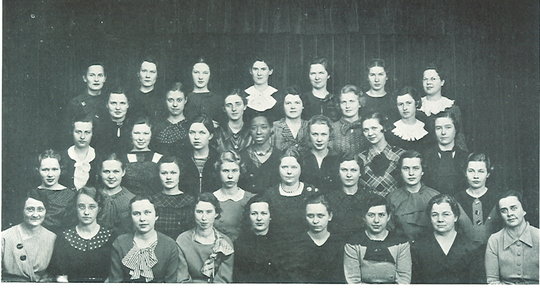 The UI Home Economics Club from the 1936 "Hawkeye."At the center of the photo is Evanel Renfrow, one of the subjects of Kaiser's book and the lone African American among the 37 women in the image. (Photo: Special to the Press-Citizen)

A key source of information for Kaiser while assembling the text was Edith Renfrow Smith, who was the first African American woman to graduate from Grinnell College in 1937. She now lives in Chicago, but — in 2015, when Smith was 101 years old  — Kaiser had the opportunity to sit down with her and ask her about what Grinnell was like way back when.

"You know there weren't that many of us Black people who lived in Grinnell," Smith said during the interview, referring to being the only black student in her classes. "The other (Black) family was the Tibbs family, but they were much much younger than I."

The Tibbs family, who Kaiser was not able to track down prior to publishing, also represents one of the few physical artifacts the city has directly connected to the families that lived there.

“The only real authentic thing we have in the museum now that can be connected to African Americans in town is a shoeshine chair from a man by the name of (James) Tibbs," said Kaiser. "He worked there for about a decade or so in the 1930s.”

The shoeshine chair was uncovered by Headquarters salon in 1996, located in the space where Tibbs used to work. After finding the chair in the basement, it was donated to the Grinnell Historical Museum, for which Kaiser is a board member.

Part of his desire in researching and publishing these stories is not only to begin to document them but with the hopes that in doing so, more stories will come forward for others to tell and record.

“I was reading newspapers censuses and — in general — famous people make bigger waves; rich people too," Kaiser said. "But the people who live on the margins, it was like they don’t exist… I wanted to get them into the record if I could. Maybe in 10 years someone else will do it better or do it differently, but I'm glad I at least got it started."