Iowa City bars plans during and after COVID-19

Long favored Iowa City bars are moving through a COVID-19 world with some measure of optimism despite set backs and hard times.

Iowa City bars plans during and after COVID-19 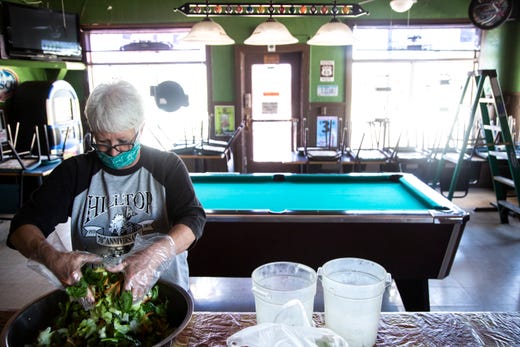 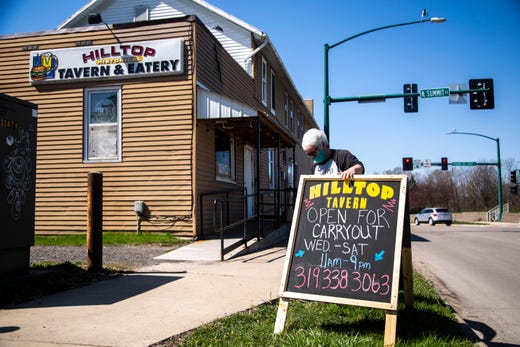 Linda Kuncl, owner of Hilltop Tavern, sets out a sign along North Dodge Street at the start of food service on Saturday, April 18, 2020, at Hilltop Tavern in Iowa City, Iowa. Hilltop has been doing carryout and delivery orders while dine-in service is closed due to the novel coronavirus. Joseph Cress/Iowa City Press-Citizen
Fullscreen 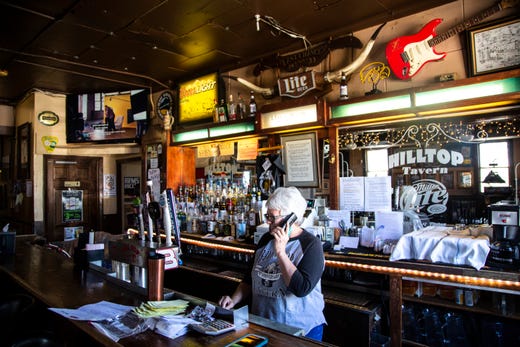 Linda Kuncl, owner of Hilltop Tavern, takes a carryout order on the phone while the dine-in service is closed due to the coronavirus, Saturday, April 18, 2020, at Hilltop Tavern in Iowa City, Iowa. Joseph Cress/Iowa City Press-Citizen
Fullscreen 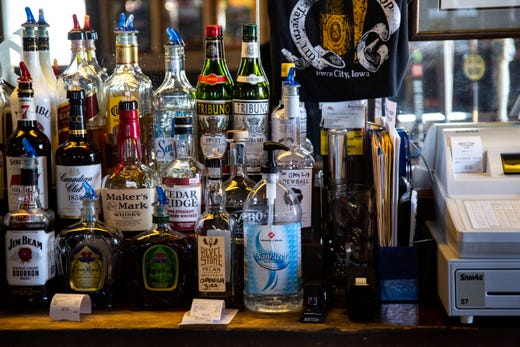 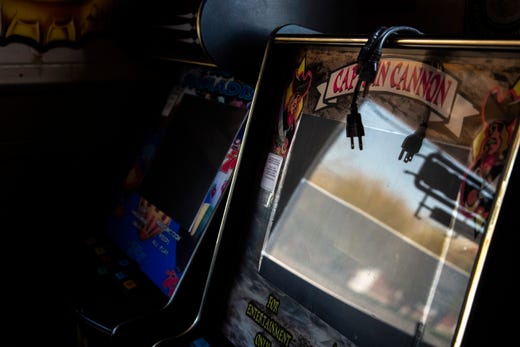 Chairs are stacked on top of tables while the dining room is closed due to the novel coronavirus, Saturday, April 18, 2020, at Hilltop Tavern in Iowa City, Iowa. Joseph Cress/Iowa City Press-Citizen
Fullscreen 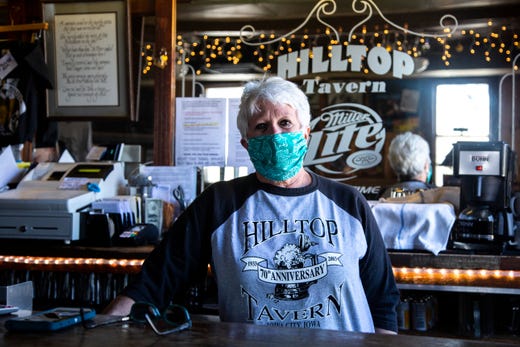 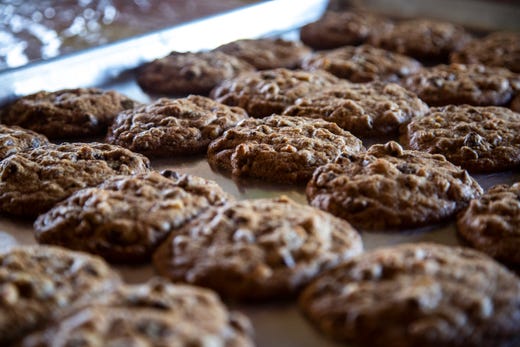 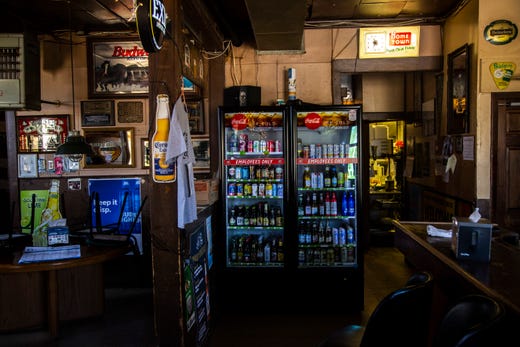 Linda Kuncl, owner of Hilltop Tavern, is reflected in a Budweiser mirror while she checks in on an order in the kitchen, Saturday, April 18, 2020, at Hilltop Tavern in Iowa City, Iowa. Joseph Cress/Iowa City Press-Citizen
Fullscreen 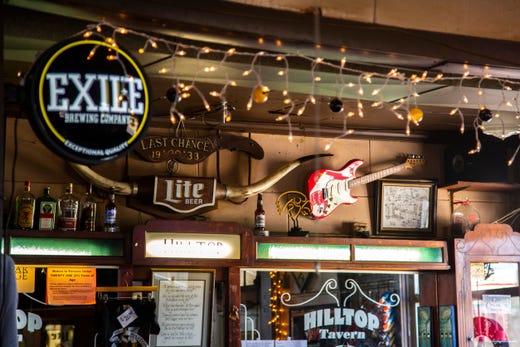 A sign from "Last Chance" hangs above the bar along with promotional beer merchandise and signage, Saturday, April 18, 2020, at Hilltop Tavern in Iowa City, Iowa. Prior the being named Hilltop, the long-lasting Iowa City watering hole was named Last Chance. Joseph Cress/Iowa City Press-Citizen
Fullscreen 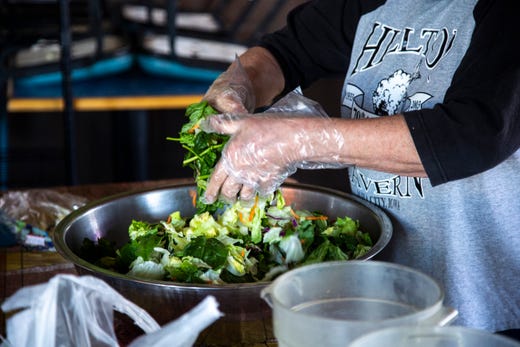 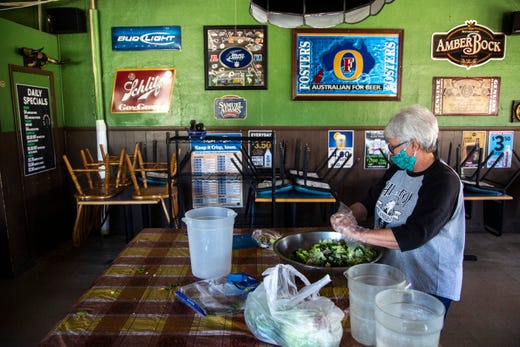 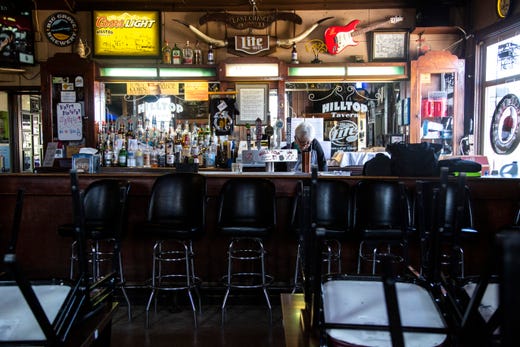 Linda Kuncl, owner of Hilltop Tavern, takes a carryout order on the phone while the dine-in service is closed due to the coronavirus, Saturday, April 18, 2020, at Hilltop Tavern in Iowa City, Iowa. Joseph Cress/Iowa City Press-Citizen
Fullscreen

Linda Kuncl had less than an hour to shut down on March 17.

"I wouldn't have even noticed if I hadn't been called," said the owner of the Hilltop Tavern, recalling the day Governor Kim Reynolds announced restaurants would only be able to order food to go. "I had one call on the cell phone and one on the landline (from an employee and a regular) calling me at the same time to tell me I had to shut down at noon."

In the middle of a building lunch rush, she had to start shutting down and inform a party coming later in the afternoon they wouldn't be allowed to do so. When she did eventually get the official notification in her inbox it was 7 p.m.

Since then, Kuncl and her staff, like most establishments, have continued having to adapt and adapt fast.

"We've never had credit cards because it's a lot of extra paperwork (and) I'm kind of old school," said Kuncl, the evening of Thursday, April 16 while finishing some paperwork. "Things are changing daily and we have to adapt daily."

Located at 1100 N. Dodge St., the Hilltop Tavern is one of the oldest taverns in Iowa City. Unlike some of the other long-loved local bars, like Geroge's Buffet and Dave's Fox Head Tavern, Kuncl has been able to stay open doing food pick up and — taking on another form of adaptation — delivery.

“We decided to try Lazy Boy Delivery," said Kuncl. “We’ve only been doing that now for a couple of weeks and we really only had three or four deliveries."

Even as access to Hilltop has been limited to pick-up and take out by government mandate, regulars have found ways to congregate, however briefly, at the tavern.

"We had five or six people (Thursday) sitting in the back of the parking lot," said Kuncl. "They were having a Hilltop picnic for lunch out there."

While government orders continue to restrict how much is possible, Hilltop still plans to remain open going forward. 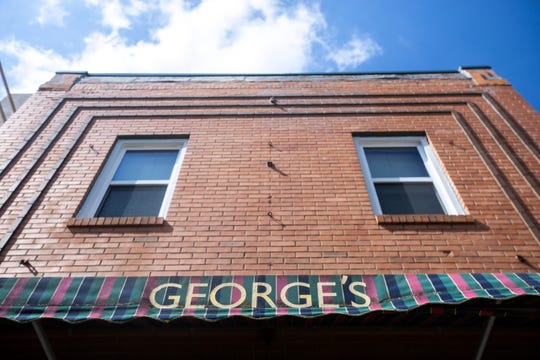 Other old school Iowa City bars like George's, however, face an uncertain future, despite being institutions.

Given its limited food menu, George's owners are not offering delivery or take out. Instead, the bar has done some deep cleaning and strategizing a way forward in uncertain times.

Foggy though the path ahead may be though, both bars are proceeding with some sense of optimism, as noted in a letter penned to its loyal customers by George's owners.

► More: From the archives: George's Buffet in Iowa City through the years

"We handle it like the Iowans that we are," reads the George's letter. "We take one day at a time; we find creative ways to do with less to stretch our unemployment checks; we yearn to discover a bit of peace in our isolation that we might be able to recreate in the future when our days of aloneness are over."

Much like George's, Kuncl — though perhaps strained — is optimistic for the future. She's most looking forward to the day she can embrace her returning customers.

"The restaurant-bar business is a roller coaster ride," said Kuncl, "no matter what."

We are committed to providing you the latest updates and analysis on the spread of the coronavirus. Help us continue providing important coverage like this by subscribing today.