A coalition of current and former students, teachers and parents say they want the district to better support its students of color. 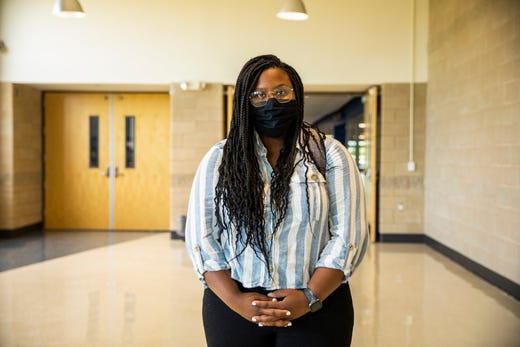 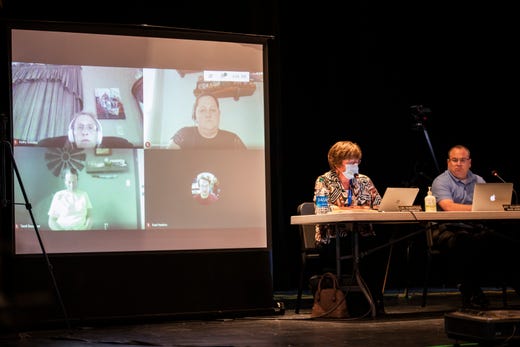 Board Secretary Lori Robertson reads submissions during the Clear Creek-Amana school board meeting at Clear Creek-Amana High School on Wednesday, July 15, 2020. Community members asked for an anti-racist curriculum and for a push for equity within their schools. Submissions included personal stories from concerned parents, students, and educators. Katina Zentz/Des Moines Register
Fullscreen

Attendees listen during the Clear Creek-Amana school board meeting at Clear Creek-Amana High School on Wednesday, July 15, 2020. Community members asked for an anti-racist curriculum and for a push for equity within their schools. Members of the audience wore masks and social distanced from one another. Katina Zentz/Des Moines Register
Fullscreen 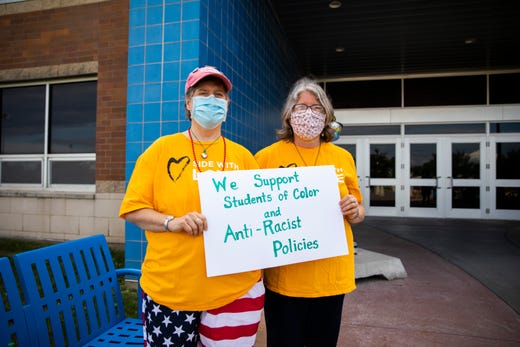 Sarah Ross, left, and Peggy Garrigues pose for a portrait before the Clear Creek-Amana school board meeting at Clear Creek-Amana High School on Wednesday, July 15, 2020. Ross and Garrigues, both members of the Unitarian Universalist Society in Coralville, stood outside of the school in support of students of color. Katina Zentz/Des Moines Register
Fullscreen

Attendees listen to submissions during the Clear Creek-Amana school board meeting at Clear Creek-Amana High School on Wednesday, July 15, 2020. Community members asked for an anti-racist curriculum and for a push for equity within their schools. Katina Zentz/Des Moines Register
Fullscreen 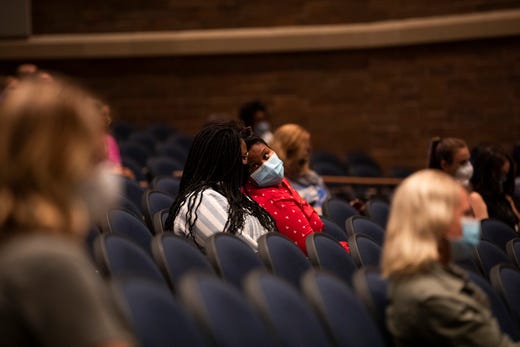 Dasia Taylor, left, and her mother make comments during the Clear Creek-Amana school board meeting at Clear Creek-Amana High School on Wednesday, July 15, 2020. Community members asked for an anti-racist curriculum and for a push for equity within their schools. Katina Zentz/Des Moines Register
Fullscreen 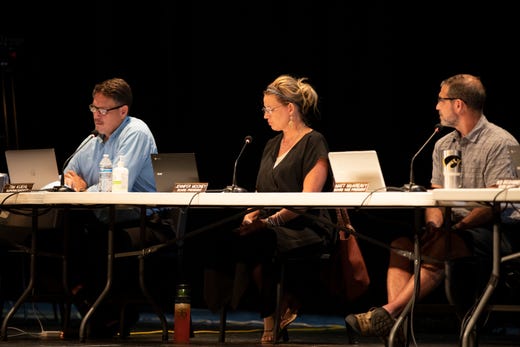 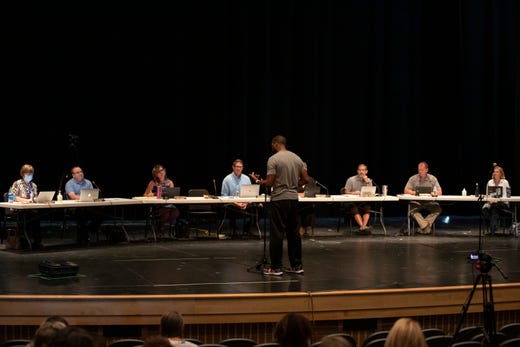 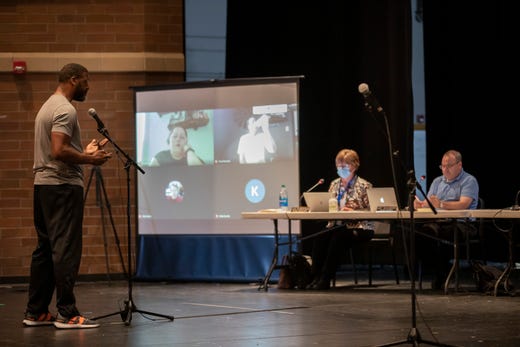 Grieving, Clear Creek Amana football player Darius Moore thought of his cousin when he took a knee during the national anthem in 2017, in the spirit of Colin Kaepernick’s protest against police brutality and discrimination.

“During the season, my innocent cousin ... was gunned down in Chicago by an officer who accused him of stealing,” Moore wrote in a letter to his school board this week. “This made our family furious, and I felt the need to take a stand.”

The response in the stands to the simple act of protest, like others across the nation, was vicious. In the days that followed, a Snapchat photo would surface of Moore in his uniform and text beneath, describing him with a racial slur and calling for him to be kicked off the football team: "honestly who the f--- kneels for the national anthem," it said. 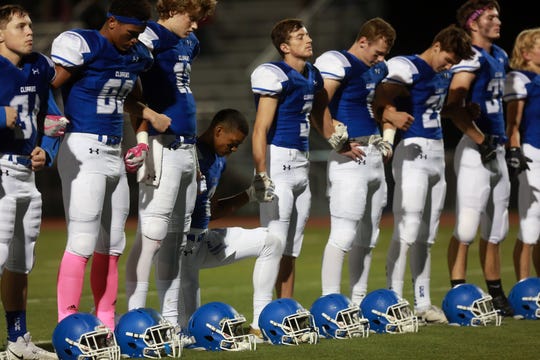 As more eyes across the nation connected with the image, the district issued a statement urging the community to “learn from this situation."

But nearly three years later, the Moore family, along with a coalition of community members, say those leading the school district have themselves not learned from the incident. Dozens of parents, students and former students submitted letters or spoke at a Wednesday night CCA school board meeting about the day-to-day racism and discrimination they say takes place on CCA's campuses.

Their comments at the board meeting were part of an effort by teachers and community members, called Better Way Forward, to establish a policy for addressing acts of racism and hate as well as more equity training for teachers, student-centered support groups and "antiracist" curriculum. 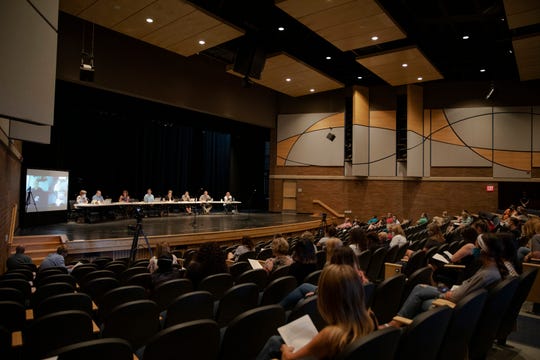 Attendees listen to submissions during the Clear Creek-Amana school board meeting at Clear Creek-Amana High School on Wednesday, July 15, 2020. Community members asked for an anti-racist curriculum and for a push for equity within their schools. (Photo: Katina Zentz/Des Moines Register)

Following the public comment period, CCA's Director of Special Services, Barb Hunt, told board members that principals in the district will work with consultants in the coming year to review biases.

"We need to understand how we look at things through our own lens," Hunt said.

Darryl Moore, Darius Moore's father, showed up to the event in person. In urging the board to take discrimination against students more seriously, he told the school board his son is not the only student who has been subjected to harmful racism in CCA's hallways and afterschool activities.

“When it comes to this issue, I’m way past being frustrated: I’m upset; I’m disgusted; and I really don’t think you understand,” Darryl said, addressing an all-White school board. “The reason some of you are not as upset as I am is your sons and your daughters do not have to deal with this particular issue that we have.” 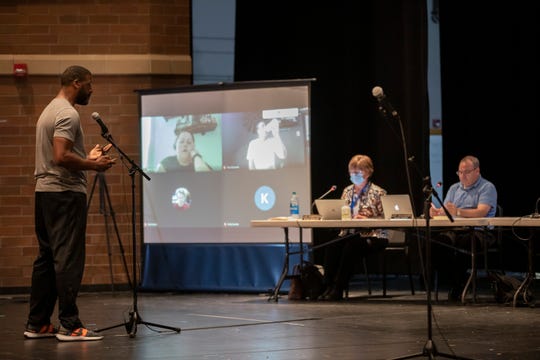 Dozens of former students, current students and families shared allegations of day-to-day racism and discrimination on CCA campuses, such as the use of racial slurs on Black students and backlash against students who use terms like “gay,” “lesbian” and “transgender.” Some of the comments were made in person. Others were read aloud at the meeting.

Dasia Taylor, a West High senior, stood before the board and recounted painful experiences she had when she attended CCA schools. She recounted the assembly in the wake of Moore taking a knee, where she said students were encouraged to not discuss the incident, and she recounted the experience of opening up her student newspaper to find a cartoon depiction of a Klansman.

She asked the board, "Do you know how much that hurt me — to see a Klansman, a person who hung my people from trees, in my school newspaper?"

"I am a Black person who survived Clear Creek Amana," she said. "I’m standing before you because nothing has changed." 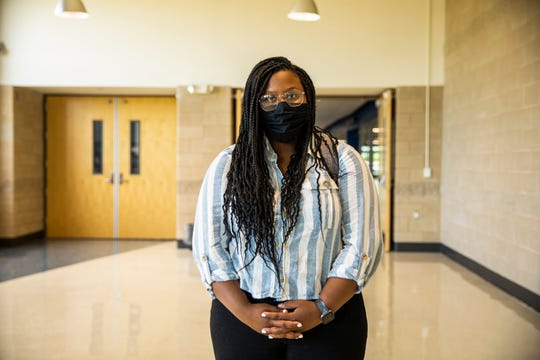 One parent opted not to speak at the meeting out of concern that her kids, whom she said are biracial, would experience backlash in the community as a result.

“I have chosen to write this letter and not come to the meeting in person because I do not wish to have any backlash against them for speaking out,” the parent wrote. “They will have to attend school in this district and already have a hard time fitting in. It is no secret that CCA has struggled with racism.”

The parent said administrators brushed off harassment that her daughter experienced, saying that her harassers would warn her of "Black Bs" in the area, a euphemism for "Black b----es," she said. In another incident, she wrote, a bus driver made disparaging remarks about her daughter and told the student her mother needed to “get you people under control.” The district superintendent later spoke with the driver, according to the letter.

“They reassured me that this wouldn’t happen again,” the mother wrote. “And it didn’t, because I pulled my child off the bus that day.” 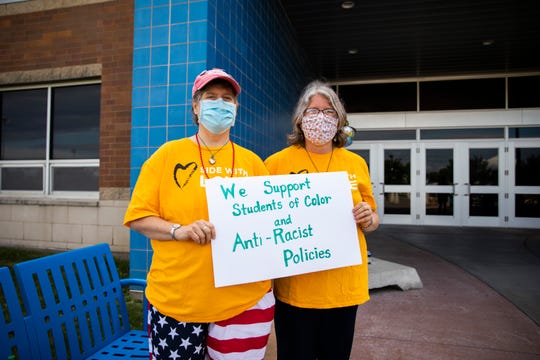 Sarah Ross, left, and Peggy Garrigues pose for a portrait before the Clear Creek-Amana school board meeting at Clear Creek-Amana High School on Wednesday, July 15, 2020. Ross and Garrigues, both members of the Unitarian Universalist Society in Coralville, stood outside of the school in support of students of color. (Photo: Katina Zentz/Des Moines Register)

A high school student who'd also submitted a written statement called for a comprehensive equity plan, like the one implemented by Iowa City Community schools, and generally more education and discussion around equity. As a person of color, the student said, her educational career, and that of other people of color, has been rife with microaggressions and racial slurs. Echoing Ibram Kendi, a leading scholar on race, the student told board members, “it is simply not enough to be not racist; we have to be actively anti-racist.”

“Hearing all the racist slurs being used — but being brushed off as a political opinion, offensive humor or 'just a joke' or 'just a word' — this cannot be handled the same way offensive language is handled,” a statement submitted by the student read. “It must be faced with backlash and intolerance.”

In another submission, a 9-year-old named Harper said elementary students should be able to bring concerns about unfair treatment and bullying to their teachers.

“I have a friend that is treated not very nice because he has black skin,” the statement read. “I do not think it is right at all.”

In a written statement to the board, a teacher, Jess Huch, told board members that she loved working in CCA, but that the district lacked systematic supports to keep students physically and mentally safe, including people of color and LGBTQ people. Not supporting them, Huch said, makes it difficult for the district's educators to develop trust with them.

“These students have shown that they do not always feel safe in our care,” Huch said. “We owe it to all our stakeholders, but most importantly to our students, to refuse to ignore the issues that occur in our district and in the world at large.”