Pete Buttigieg at the Political Soapbox: 'Corporations do not have the same political souls as human beings like you and me'

"Corporations do not have the same political souls as human beings like you and me," Pete Buttigieg told a crowd at the Des Moines Register Political Soapbox.

Pete Buttigieg at the Political Soapbox: 'Corporations do not have the same political souls as human beings like you and me'

Democratic presidential candidate Pete Buttigieg says the U.S. Constitution should be amended to include campaign finance reform that overturns the Citizens United ruling that has allowed so-called "dark money" to infiltrate politics.

"Time for a constitutional amendment to clear this up once and for all: That money is not the same thing as speech, and that corporations do not have the same political souls as human beings like you and me," Buttigieg told a crowd Tuesday at the Des Moines Register Political Soapbox.

In 2011, then-presidential candidate Mitt Romney, a Republican, spoke to another Soapbox crowd, solidifying his place in the fair's political history books by telling some hecklers, "Corporations are people." 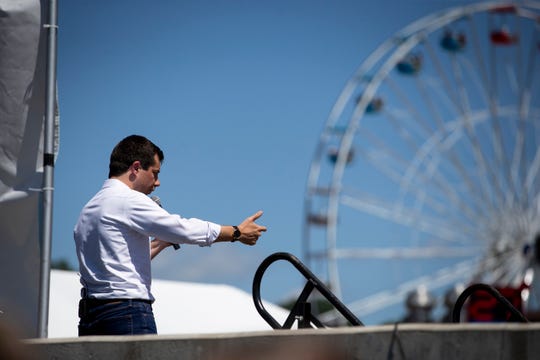 The South Bend, Indiana, mayor said the Democratic-controlled U.S. House of Representatives passed an elections bill this year to curtail the power of special interests and large donors in politics. He criticized the Republican-led U.S. Senate for not taking up the bill for a vote.

"Don't tell me that we cannot entertain a thoughtful constitutional remedy to secure our democracy so that it actually works for all of us," he said.

Citizens United is a 2010 U.S. Supreme Court ruling that made political spending a form of protected speech under the First Amendment, which has allowed some unlimited campaign giving in presidential, national and state politics.

"This is not a democracy as long as dollars can out-vote people," he said. "Citizens United was a disaster for this country. And we need reform."

Tuesday was Buttigieg's first time on the Soapbox and at the Iowa State Fair. The 2020 hopeful, now a top-tier candidate who raised the most money of any Democratic candidate in the second quarter, seemed to revel in the fair experience by casting a kernel for himself and visiting the butter cow. Despite being swarmed by a large group of reporters, he stopped often to shake hands with fairgoers.

When it comes to food at the Iowa State Fair, Democratic presidential candidate Pete Buttigieg told the Soapbox crowd on Tuesday, Aug. 13, 2019, that he'll sample all he can. The Des Moines Register

Buttigieg turned most of his 20 minutes on the Soapbox into a town hall of sorts, focused on questions from the audience. He committed to riding the fair's big yellow slide with someone. He also used his final minutes to get crowd feedback on what he should eat. The consensus: pork chops.

"I promise to sample as much as I can and offer a thoughtful assessment of the fair food afterwards because I'm very much looking forward to conducting the research on that," he said.

Elizabeth Hendrix, 61, of Des Moines, spoke briefly with Buttigieg as the 37-year-old candidate headed to the Iowa Pork Producers tent to flip pork chops. She said two of her sons are in the military and another son is gay. Hendrix said she sees her family in Buttigieg, who has served in Afghanistan and is openly gay.

"He represents my children," Hendrix said. "It is time for those old guys to get out. I'm a baby boomer, but it's time to get some new, young blood."

Barbara Rodriguez covers the Iowa Statehouse and politics for the Register. Reach her at bcrodriguez@registermedia.com or 646-385-1212. Support reporters who follow your government by becoming a subscriber. Sign up at DesMoinesRegister.com/Deal.