E. coli death of Southeast Polk second-grader not seen as part of a broad outbreak

E. coli death of Southeast Polk second-grader not seen as part of a broad outbreak

Natalie Baker(Photo: Special to the Register)

Iowa experts do not see evidence of a broad outbreak of E. coli poisoning in the state, despite Friday's reported death of an Iowa second-grader from the bacteria.

The Southeast Polk school district announced this weekend that Natalie Baker, a second-grader at Willowbrook Elementary School in Altoona, died Friday from complications of E. coli poisoning. Her mother reportedly told officials that Natalie had been complaining of a stomachache.

The bacteria often are spread by tainted food, such as ground beef, fruits and vegetables and unpasteurized dairy products. The germs can also be spread from one infected person to another.

The Iowa Department of Public Health doesn't comment on specific cases. But department spokeswoman Polly Carver-Kimm said Monday there is no sign of a widespread E. coli outbreak in Iowa.

Carver-Kimm said Monday morning that her agency's records did not immediately show any confirmed Iowa deaths from E. coli poisoning in the past decade. However, Carver-Kimm later said department experts were combing through records to be sure there hadn't been any such cases.

Some E. coli outbreaks are linked to a single source, such as a recent national outbreak of poisonings tied to tainted romaine lettuce. However, individual poisonings from the bacteria crop up regularly.

E. coli are one of several types of germs that can cause dangerous food poisoning. Another type, the parasite cyclospora, has been in the news lately because of a wave of food poisonings in Iowa and other states related to McDonald's salads.

An Iowa Department of Public Health report released last month said 444 cases of suspected or confirmed E. coli poisonings had been reported in the state over the previous year.

Many types of E. coli bacteria exist harmlessly in people’s intestines. But one type, E. coli 0157, produces a dangerous poison. Symptoms vary, but can include severe stomach cramps, diarrhea and vomiting, according to the federal Centers for Disease Control and Prevention. Most people recover within five to seven days, but some develop dangerous complications, including kidney failure. 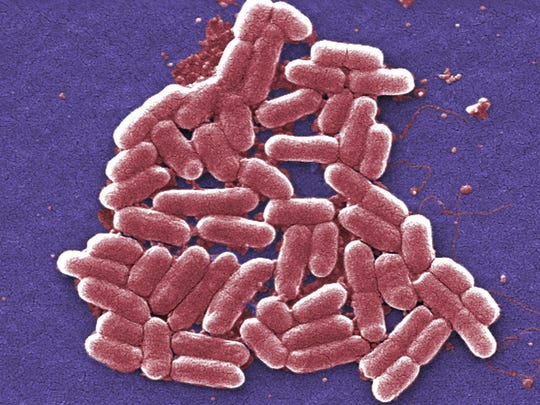 Most symptoms appear three of four days after a person eats or drinks something tainted with the bacteria, but the symptoms can start after one to 10 days, the CDC said.

Federal experts say people should contact a doctor’s office if they have diarrhea lasting longer than three days, or if they have high fevers, blood in the stool, or severe vomiting that leads to dehydration.

How to keep safe

(This story has been updated to reflect that the Iowa Department of Public Health is double-checking to see if there have been other E. coli deaths in Iowa in the past decade.)