One of the first Iowans to build a hog confinement, farmer Jerry Grings dies of COVID-19

Born on a farm in Muscatine County, Jerry farmed his parents’ land, growing a strong work ethic as he tended crops and looked after livestock.

One of the first Iowans to build a hog confinement, farmer Jerry Grings dies of COVID-19

A Cubs fan, the "flower lady," husbands, wives, and more are part of the more than 1,400 Iowans lost COVID-19 as of early October 2020. Des Moines Register

Jerry Thomas Grings’ nickname, “Big Jer,” wasn’t due to his height or his weight.

No, the moniker stuck because of the 80-year-old’s enormous heart and giving nature.

“Our legacy is that we learned from the best,” said Jerry’s son, Jeff. “Just to treat people right, treat people with respect, help out when you can and love your family.”

Jerry died of complications from COVID-19 on Nov. 28 in Bettendorf. He was 80.

Born on an acreage in Muscatine County, Jerry farmed his parents’ land, growing a strong work ethic as he tended crops and looked after livestock. 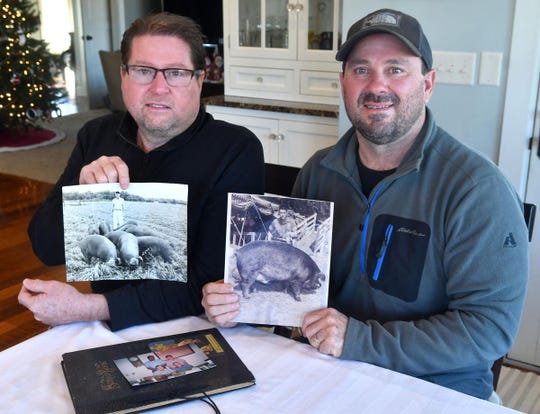 Jeff and Brett Grings of Wilton holds photos of their father Jerry Thomas Grings who died on Nov. 28, 2020 at UnityPoint-Trinity Bettendorf hospital from complications with COVID-19. (Photo: GARY KRAMBECK/Quad-City Times)

In the mid-1970s, Jerry became one of the first farmers in the state to have a hog confinement. Dignitaries from around the world came to visit the barns and study his animals, Jeff said.

Barely a day went by that Jerry didn’t do his chores, even after his sons took over grain producing on the farm about five years ago.

“There is no doubt he was the backbone and kind of the glue to it all,” Jeff said.

Jerry went into town to greet friends every morning and cheered on sports teams whenever he could. 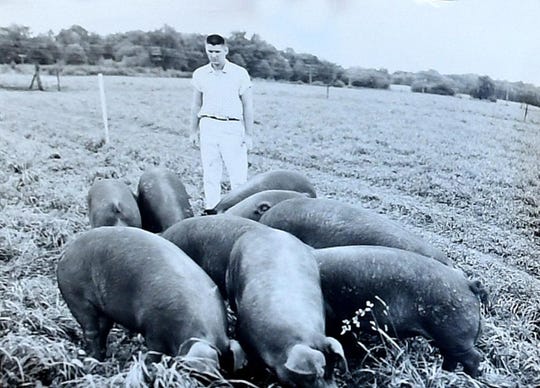 A photograph of Jerry Grings with a traveling trophy for prize hogs at the Muscatine County Fair in 1954. (Photo: Special to the Register)

The patriarch never liked to go on vacation, preferring to find adventure on day trips. Recently, he had driven two hours to a store he said had particularly crisp pickles, returning to Muscatine County with enough jars for friends and family.

Known for his flat-top, Jerry asked his other son, Brett, to cut his hair when the barber shop closed this spring. Brett obliged, with the help of a pair of pig clippers, which restored the famous coif to a passable state, he said

Jerry delivered cattle to Louisiana in the fall and returned feeling just a bit ill. His prescription for sickness was always to get out in the sun and do some work.

But this time, neither the sunshine nor the work provided the salve.

During this year’s harvest, Jeff worked with his dad in “almost perfect weather and a wonderful yield," he said.

With Big Jer now gone, Jeff finds himself thinking about that final, perfect harvest — a small blessing in these difficult times. 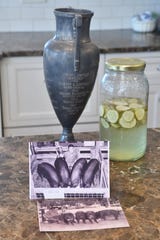 A traveling trophy for prize hogs at the Muscatine County Fair with the name of Jerry Grings in 1954, a jar of his favorite pickles and photos of Jerry Grings with his prize winning hogs. (Photo: Special to the Register)

This story is part of the Iowa Mourns series, a collection of remembrances about Iowans who lost their lives to COVID-19. If you've lost a loved one to COVID-19 in Iowa, let us know by filling out this form or emailing Iowa Columnist Courtney Crowder at ccrowder@dmreg.com.

The following are deaths from COVID-19 were added in the past week to our list of more than 400 Iowans who have died from the disease, found at DesMoinesRegister.com/IowaMourns.

Keith Wayne Anderson, 73, Kalona. Served in Vietnam as a sergeant during the Tet Offensive.

Jean Calligan-Salmons, 71, Sioux City. Took over her family's restaurant, The Tastee Inn and Out.

Loretta Caruthers, 64, Keokuk. Enjoyed spending time arguing about the television with her husband.

Elizabeth Coovert, 8, Fort Madison. Grew up with eight siblings on a family farm at String Prairie.

Beth Neubaurer, 77, Ankeny. Proudly carried the nickname of Gramcracker, or Cracker for short, which was given to her by her older grandkids.

Jackson Selk, 74, Cedar Rapids. Appointed to the Juvenile Justice Advisory Council for the State of Iowa and worked as coordinator for the Linn County Emergency Youth Shelter.