Norton comes home to share story of faith with B-F

Bondurant-Farrar graduate Chris Norton came to speak to students during their homecoming week on Thursday.

Norton comes home to share story of faith with B-F

Chris Norton, former student who was paralyzed while playing football at Luther College.(Photo: Mark Davitt/Special to the Herald-Index)

Bondurant-Farrar graduate Chris Norton came to speak to students during their homecoming week on Thursday. 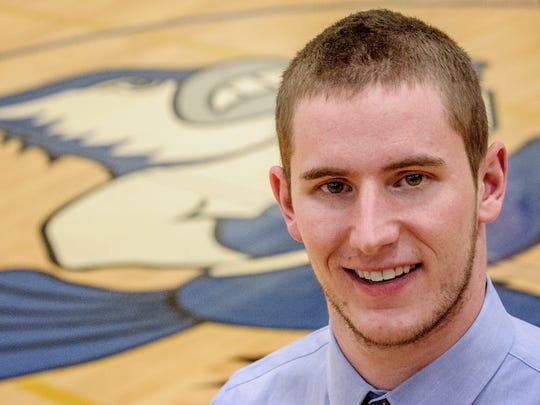 Chris Norton, a 2010 Bondurant-Farrar graduate who was paralyzed that fall while playing football at Luther College, is shown in 2015 when he returned to his school to give a speech. (Photo: Mark Davitt/Special to the Register)

Norton was severely injured while playing football for Luther College on October 16, 2010 against Grand View College.

“I laid there motionless from the neck down. It was like a switch was flipped off in my body,” Norton said. “I was embarrassed, I hated having medical attention on the field.”

After trainers were rushed to his side, they did the normal tests on the field to get an understanding of the severity.

“Eventually they called for an ambulance. After the ambulance they called in for a helicopter,” Norton said. “That was when I said ‘Okay this is serious.’”

The original diagnosis was that Norton was paralyzed and would never gain mobility below the neck ever again.

Norton wouldn’t take that answer though.

“It was a very difficult time but I knew in my mind that I couldn’t accept it,” Norton said. “I focused on what I could control which was my attitude and effort and brought that every single day with a positive attitude.”

Norton spoke to the students about how he persevered through his odds to beat his diagnosis.

“The first thing I was told was that there was a three percent chance to ever get any movement or feeling,” he said.

He put every waking moment into his recovery immediately even with the first task of nodding his head.

Norton explained that the worst time during his recovery was at night. “It was claustrophobic. It felt like I was strapped to the bed and I couldn’t break free of the straps,” Norton said. “All of the thoughts and fears would start creeping in.”

Georgia, a nurse from Wyoming, reinstalled the faith to overcome the battle when she told Norton that he was going to beat this.

As Norton’s recovery crept near the five-week mark he was quickly approaching the point known in the medical field as the last time you could get movement in your legs. Norton explained the feeling as being in a constant cast and you couldn’t move.

“One day my big toe emerged from the cast. I told the doctors and he said no,” Norton said. What the doctor told him he was feeling was a phantom feeling and that he made it up in hope it was true.

Norton was crushed. His father had not cried to this point and he started to tear up.

“He said ‘Chris don’t let anybody tell you what you can or can’t do,’” he said. He went to work to try and prove the doctor wrong. A week later Norton wiggled his toe.

Norton has come a long way since then. Last spring, Norton celebrated two personal feats. First he proposed to his girlfriend and second he successfully walked across the stage at his college graduation with assistance.

Norton and his father Terry have recently written a book called The Power of Faith When Tragedy Strikes about their experiences and how their faith helped them persevere.