Requiem for Spike: On the eve of the last VW beetle rolling off the assembly line, memories of a first car

A red bug, country roads and a trip down memory lane on the eve of the last Beetle rolling off the assembly line.

Requiem for Spike: On the eve of the last VW beetle rolling off the assembly line, memories of a first car

A 1964 Volkswagen Beetle that originally sold for $1757, is hitting the auction block for $1 million dollars! Buzz60's TC Newman tells you what makes this car a drivable time capsule.

My first car was named Spike.

He was a bright red Volkswagen Beetle complete with an oversized yellow daisy in the dashboard vase. He was gender non-binary before most knew gender didn’t have to be binary.

Driving into my high school’s parking lot, there were other strange cars in the sea of sedans. The one kid with the huge van or the other with a ride so old the nostalgia made it hip or the dozen or so very expensive foreign SUVs.

But Spike was weird and unique, feminine yet unwilling to be one of many. What I thought of my car was what I hoped people thought of me. 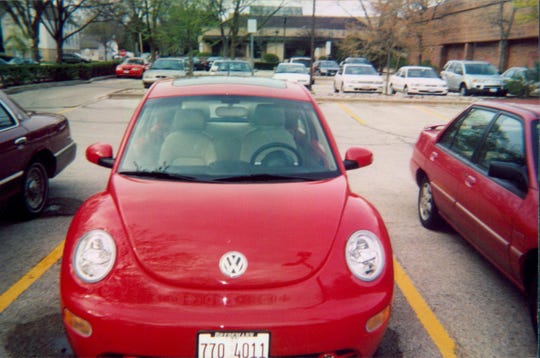 I was one of the youngest in my grade, so I didn’t turn 16 until the fall of my junior year. By then, most of my friends had their licenses and it was easier, less stressful to be a passenger.

I didn’t beg for a car, maybe even eschewed getting one in some ways, but my parents got sick of carting me around to the various activities, jobs and volunteer events that filled my days. (If you’ve ever seen the Bill Murray-helmed “Rushmore,” I am/was the Jason Schwartzman character who does the 101-level of every hobby and joins every club.)

I asked for a Beetle (I was a child raised by the Disney channel after all) and, just my luck, a local dealership had a used one for a great deal right on their lot. My parents would pay, but I would be expected to take my sister places and run errands when needed.

I drove the car home that day — the slowest I have ever driven — and my decadelong love affair with Spike began. Before my recent anniversary with my husband, Spike was the longest relationship I ever had.

The final new Beetle made its way off the assembly line in Mexico on Wednesday, marking the end of an era not just for me, but for anyone who remembers Herbie the Love Bug or the 2011 Super Bowl “Black Betty” commercial.

The rest of my senior year and throughout that summer, Spike took me to my first real job as a barista at Starbucks. He tooled around The Glen, the hip new development in my North Shore town, and made frequent stops at Steak N’ Shake for all manner of dairy deliciousness. (Flavor recommendation: Cinnamon)

When I moved to New York for college, I decided not to come back home for a few summers. My dad built an offshoot of our driveway — now known as the “pad” — where Spike sat and waited.

During those years, I fell in love with public transportation. Once again, it was easier, less stressful to be a passenger.

The commotion of it all was intoxicating: The hustle and bustle of people getting from place to place was exciting, and watching the hordes of humanity thrown together on a small, dirty tube flying on ancient tracks through the city was always interesting — a boon to a nascent writer searching for characters.

And the subway was a place where you could do: Check emails, make calls (later in my riding time once they added Wi-Fi, and the signals got better), read, edit, study. It is and was great for the fact the world didn’t have to stop — you could work while you got where you were going. 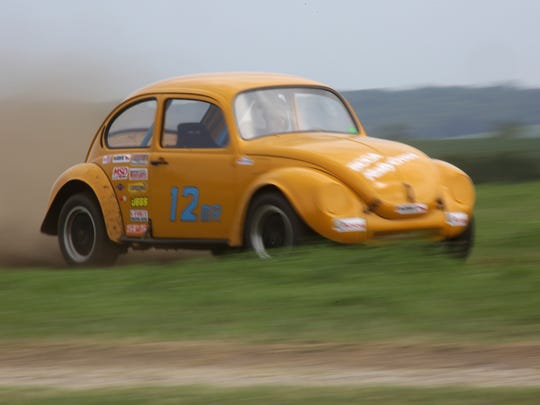 A 1971 Volkswagen Super Beetle races on Aug. 8 at the RallyCross Nationals in Indianola. (Photo: MICHAEL ROLANDS/RECORD-HERALD)

Lake County is an amalgam of ways of life. Uppity, high-class suburbs with downtowns modeled after New England towns give way to farms and open prairie as you head north to the Wisconsin state line.

Driving those county roads, the sun reflecting off the asphalt and the air whipping past my open window, I came to understand that the car could be my place. Those few cubic feet inside my bug became a refuge to cry, to breathe, to get my sh-- together, to zone out or, most importantly, zone in on me.

If it isn’t obvious, I am obsessed with doing. I am someone who has trouble slowing down. Relaxing is anathema to me, and sitting for too long makes me queasy.

I used to think that made me better than others, that my stamina was a sort of proof that I was super-human.

But in all that motion, there’s not a lot of time to think or to focus.

Driving those roads that summer forced me to quiet, and to refine my focus. I figured out how to breathe, literally and metaphorically.

Spike became not just a horseless carriage, but a safe space that helped me crystallize what I wanted from my life. I wanted to be a writer and I wanted to tell stories and I wanted to do that in a way that made people feel something. To do that I needed experiences, I needed Spike to take me places, and I needed to feel things for myself. (Oh, and that guy I’m with just might be the one.)

After college, I moved back home, and a few years later, my now-husband and I moved into a small apartment in Chicago.

My husband had a giant car at the time — a 1992 Ford F-150 XLT — and trying to park that on Lakeview’s streets was a nonstarter. He took the bug — the daisy was immediately tossed — and I started taking public transportation again. 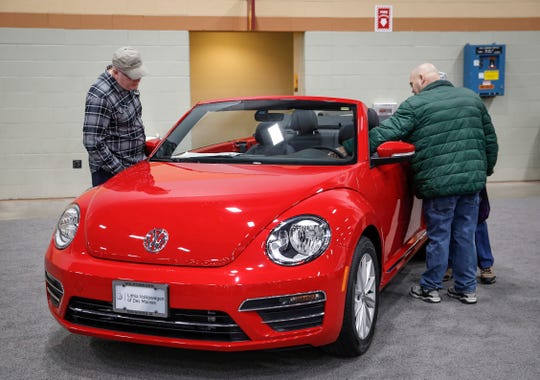 We tell Iowans' stories like no one else. Join today to support local journalism.​​​​​​​

I wonder if people are just filling those precious cubic feet of more stuff instead of letting that space and the road and the landscape fill them.

And these bigger cars seem to be similar, right? Like the parking lots of Hy-Vee are just full of Escape-Edge-Equinox-Rogue-Highlanders. I hope we aren’t seeing a Levittown-ization of cars, and that the electrifying feeling of spotting a punch-buggy (or any other unique car) on the highway won’t be left solely for those visiting classic car shows.

Spike traveled to Iowa with us on a cold January day in 2015 and made it through the 2016 caucuses. But in April of that year, Spike stopped starting without a jump.

I recently moved to West Des Moines, which increased my one-block walk home to a 20-minute ride.

When I find my mind running away from me and my brain cataloging its to-do list while speeding down I-235, I try to stop and refocus and reflect.

Today, I have a car and not a Spike, but every once in a while the memories of that summer come flooding back, and I slow down — even if just for one exit.

What are your memories of your first car? Let me know through email ccrowder@dmreg.com or Twitter @courtneycare.

COURTNEY CROWDER, the Register's Iowa Columnist, traverses the state's 99 counties telling Iowans' stories. She implores you to put the phone down, wait to reply to that text and stay focused while driving. You can reach her at (515) 284-8360.