Back on the bike: A former staff member returns to RAGBRAI, offers apology

Andrea Parrott, former RAGBRAI merchandise and media manager, is rejoining the team to focus on social media and assist the RAGBRAI crew.

Back on the bike: A former staff member returns to RAGBRAI, offers apology

RAGBRAI is headed north for 2020. See the towns that thousands will visit on this year's summer ride. Wochit

A familiar name is returning to the staff of the Register’s Annual Great Bicycle Ride Across Iowa, colloquially known as RAGBRAI.

Andrea Parrott, formerly the ride’s merchandise and media manager, is rejoining the team as a marketing and logistics coordinator, focusing on social media and the RAGBRAI crew, the behind-the-scenes volunteers who ensure the event runs smoothly. Held annually on the last full week of July, RAGBRAI — believed to be the oldest, largest and longest recreational bicycle touring event in the world — attracts about 10,000 riders from all 50 states and a host of international locations.

Parrott, 36, will also be back behind the mic answering questions about RAGBRAI and cycling in her Parrott Talk segment on the soon-to-be-revived “Just Go Bike” podcast.

“I’m really happy we’re bringing Andrea back to the RAGBRAI team,” Ride Director Dieter Drake said. “She’s going to get to work on some things we’ve just not had time to focus on in the last few months, and I’m sure she’ll make a positive impact right away.” 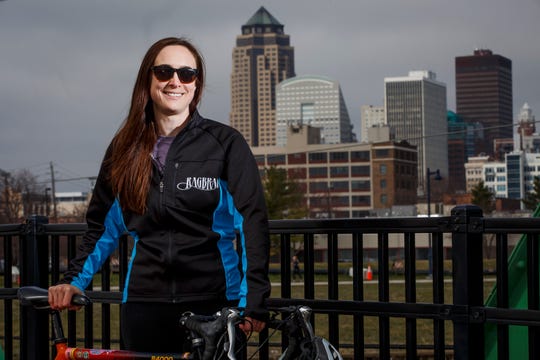 For Parrott, this news is a two-fold announcement, both a homecoming and a mea culpa.

Her return to RAGBRAI represents a personal refocusing on what matters in her life, namely cycling. Ever since her sparkly purple Schwinn, complete with banana seat, offered a measure of freedom to tool around Coralville, she’s loved biking. And when her asthma flared up as a teen, throwing most team sports out the window, she doubled down on cycling, an activity she could compete in without losing her breath.

Coming back also feels like a rededication to a deeply held family tradition. Her parents met while riding RAGBRAI, her sister-in-law got engaged in a RAGBRAI jersey and the Parrott clan takes finishing every mile so seriously that her aunt once refused to stop pedaling despite breaking a rib along the route. Parrott was admitted into this RAGBRAI-loving cult after conquering her first hill at age 11.

“I’m definitely back with my people,” Parrott said. “We’ve been working toward a common purpose for a long time, so it feels right to be back on track with that.” 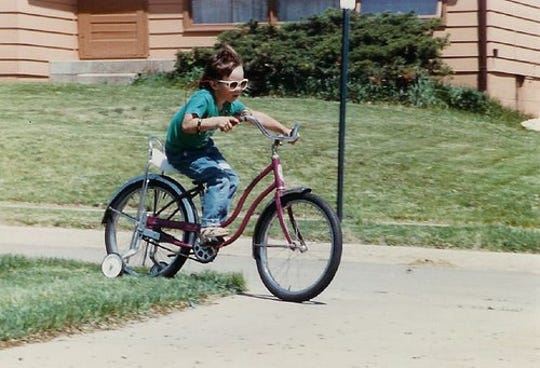 Andrea Parrott on her purple Schwinn (Photo: Special to the Register)

But there’s that second part she wanted to address, too: the mea culpa. Parrott was on the former RAGBRAI team that walked out in October over what was then-described as a disagreement with how the Register handled its profile of Carson King, the 24-year-old former security guard who rose to fame after holding up a sign requesting beer money in view of ESPN’s “College GameDay” cameras when the show was in Ames in September. Though facetious, the sign elicited donations, which King decided to give to the University of Iowa children’s hospital, eventually raising more than $3 million in direct and matched donations.

Parrott wasn’t a ringleader in the team’s messy exit: Instead, she got caught up in a whirlwind, she says, not able to stop and think in the short time between when former RAGBRAI Director T.J. Juskiewicz offered her a role with his new cycling venture, Iowa’s Ride, and when his TV news interviews and social media posts publicly tendered their resignation.

Plainly, if she had thought more about the move she was making, she now says, she wouldn’t have made it.

“I wish that I would have just been more true to myself,” she said. “I think I knew at that time that it was not the right decision for me because I love RAGBRAI.”

For RAGBRAI and its diehard fans, Parrott’s institutional knowledge can only help ensure the ride’s success. But for those of us who experienced the former team's exit, lingering questions about what exactly went on persist. Parrott gets that, so she agreed to sit down and talk with me about what happened.

And, for her, the lesson of the past few months is simple: Always trust your gut.

Andrea Parrott poses for a portrait on the Jackson street bridge on Tuesday, March 24, 2020, in Des Moines. Parrott is returning to RAGBRAI after leaving the ride last fall. (Photo: Brian Powers/The Register)

Walking out on her 'dream job'

The butterflies in Parrott’s stomach weren’t the good kind.

As she walked out on her “dream job,” she was immediately overcome by waves of numbness, sickness and confusion, she said.

Parrott joined RAGBRAI in 2012, landing the gig about a month before the 40th edition of the ride rolled out from the Missouri. Her first job was shipping merchandise, but she gradually rose to writing for RAGBRAI’s website, coordinating the ride’s social media and managing press along the route.

While Parrott didn’t notice at the time, she says that in hindsight Juskiewicz was “becoming frustrated with his job over the course of the whole year.”

Parrott was listed as a staff member on the Iowa’s Ride website as early as Oct. 6, a forensic analysis showed. But Parrott said Juskiewicz didn’t tell her what he was planning until “relatively close” to their last day on Oct. 15.

“He's like, ‘I'm leaving. I'm starting this new ride. We're gonna start over,’” Parrott said. “It was a huge surprise to me.”

In an email interview, Juskiewicz said he had discussions with the team and started working on the website “a week to 10 days” before they left.

“I also made it clear on several occasions that I would be fine if (Andrea) stayed and continued at RAGBRAI,” he said.

When RAGBRAI’s two other team members agreed to leave, Parrott felt like she had no choice. The foursome previously planned that if one of them was ever laid off, they would all leave in solidarity. She had a deep loyalty to her RAGBRAI colleagues, and this felt like their pact being initiated.

“The reason that I left was because I was a part of a team, and we were a close team at that time,” she said. “We all left together. It didn't seem like an option to stay behind, which I wish I had.”

Other reasons for leaving

In interviews after their exit, Juskiewicz said he resigned because he was “blocked” from releasing certain statements addressing the Carson King profile, including comments on the Register’s reporting of racist tweets King sent as a teen.

After discovering the tweets, the Register writer approached King, who responded with regret and apologized. King continued to raise money and make public appearances.

Not everyone, including Juskiewicz, agreed with the Register's inclusion and framing of the tweets in the story. But Parrott said that had little bearing on her departure.

“It never felt like my reason,” she said. “Maybe it was T.J.’s reason. I'm not sure … For me, it was T.J. was frustrated with working with corporate.”

Parrott didn’t fear encroachment of “corporate” control, she said, adding there hadn’t been any major changes to the ride in the eight years she worked for Gannett. And, personally, she never felt “prohibited” from speaking up.

“It's complicated because my job was media manager, however, T.J. was our spokesperson,” Parrott said. “So I think sometimes when ‘team’ was said, we meant him.” 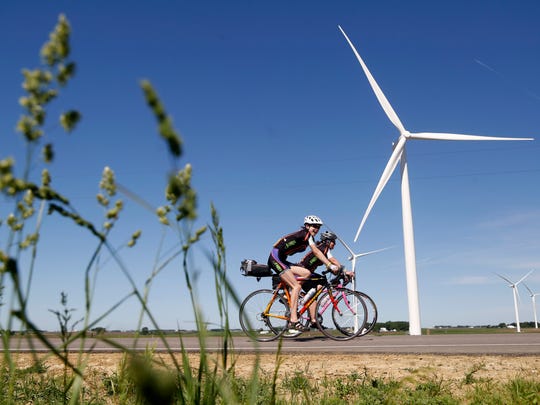 Since the former employees’ departure, RAGBRAI’s charitable donations have been questioned; some have suggested that the murkiness about exactly what goes to charity might have prompted the team's exit. Past participant guides suggested that all profits after expenses were donated to charity, which the new team learned was inaccurate, senior marketing director Anne Lawrie said.

After taking a deep look at the financials, the new RAGBRAI team committed to giving away more than $300,000 this year to Iowa towns and organizations and plans to work up to donating $1 million annually.

Parrott said charitable giving was rarely a topic of discussion when she worked under Juskiewicz.

“It was never mentioned until after we left,” she said. “I didn't realize that would have been a motivating thing.”

Juskiewicz said he didn’t have access to the financial documents about charitable giving until October. Before that, he told participants that “all proceeds after expenses" were donated to Iowa nonprofits, language he said has been in “RAGBRAI literature dating back into the 1990s.”

“I’m glad...some major changes were announced in regard to helping towns with expenses and contributing more to Iowa charities,” he wrote in an email.

After walking out, the former RAGBRAI team went to el Bait Shop for a few beers, but celebration wasn’t on Parrott’s mind. The Iowa’s Ride website went live, listing Parrott among the team members; she asked to be removed, not yet sure if that was “the right path” for her.

“They were having the feeling of like, ‘Forget this. We're moving on. Bye-bye. It's over,'" she said. “And I was feeling … I'm basically leaving my whole life. It was a tough decision, and it never felt right.”

She was employed by Iowa’s Ride for a few weeks, but said, “there wasn’t much work.”

“I never felt comfortable with the reasons we left,” she said, “and it didn't take very long to realize that you can't start a job on ehhh kind of feelings.” 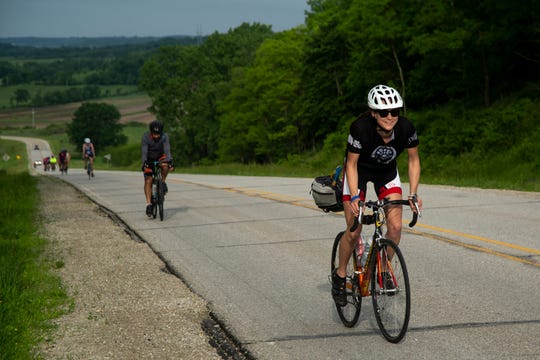 RAGBRAI's Andrea Parrott tops a hill as riders on RAGBRAI's Pre-Ride make their way from Winterset through The Ag Oasis and onto the day three end town of Indianola on Tuesday, June 4, 2019. (Photo: Brian Powers/The Register)

Her gut had tried to warn her before, and these new butterflies were telling her it was time to own up to her actions. She had to make amends with RAGBRAI.

“When you've wronged someone, you can't expect them to accept your apology,” she said. So I thought, “I’ll make the offer, but I'll leave it to them to say whether or not they really want that. Happily, they were open to that.”

In an email, Juskiewicz congratulated Parrott on her RAGBRAI return, saying she is “a wonderfully talented young lady.”

Parrott understands she has some bridges to rebuild and some personal apologies to offer, but she hopes cyclists know she is going to work toward regaining their trust. And she wants to be clear that she is confident RAGBRAI is operating with integrity and honor, and is as focused on Iowa and its people as it ever has been.

“I've said what I said, and I can own that,” Parrott said, “but that doesn't have to be my final say on something.”

On RAGBRAI, it surely won’t be. 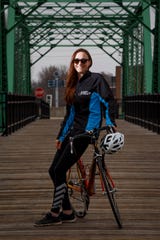 Andrea Parrott poses for a portrait on the Jackson street bridge on Tuesday, March 24, 2020, in Des Moines. Parrott is returning to RAGBRAI after leaving the ride last fall. (Photo: Brian Powers/The Register)