Since regaining voting rights, Patrill Ellis anxiously anticipated Election Day. With his ballot counted, he feels like his voice was finally heard.

Iowa was the last state to ban those with felony convictions from voting, even after completion of their sentences. Des Moines Register

Patrill Ellis stood in front of the ballot scanner concentrating deeply as he held back a well of tears. He inched his ballot into the slot cautiously, a few centimeters at a time, until the machine grabbed the paper, ingested it and spit out a message.

“Wow,” Ellis said quietly, a wide smile spreading across his face. The 36-year-old dabbed his eyes covertly as the poll workers’ cheers made him chuckle. “What number are you?” one asked.

But there was a different figure looming large in Ellis’ mind right then: 1.

This was his first vote. This was the first time in years that people like him, people who had made mistakes and served their time, were allowed to vote in Iowa without getting special permission from the governor. This was the first time his status as a felon didn’t relegate him to second-class citizenship, didn’t mean he couldn’t do what other Americans regularly took for granted. 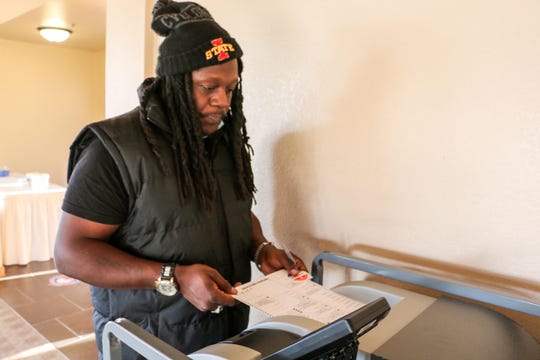 Until early August, Iowa had the dubious distinction of being the last state in the nation with a blanket ban on felons voting. Gov. Kim Reynolds signed an executive order restoring the right for most people who have completed their sentences.

With the whir of that scanner, all the excitement building up inside Ellis came pouring out as he held the true weight of his re-enfranchisement.

“I feel fantastic,” he said into the crisp fall wind. “I feel like I just played a part in history.”

For the first time, Ellis had a say in determining his president, his senator and all the way down the ballot to his local hospital trustees. Voting, he says, stopping as he searches for the right phrase, felt like a shift in his soul, like he added another patch on the journey he’s taking to become his best self.

“When you're a felon and you're not allowed to vote, it's like you're in a dark room and no one hears you,” he said. “Once we got our rights to vote back, it's like we walked out of that dark room, like someone opened that door, and now we could see.”

‘Beguiled’ by a bad crowd

One of six children, Ellis grew up in Harvey, a small city south of Chicago. His mother wasn’t part of his life and his dad was in and out of jail, so he fell into foster care. Moving from group home to group home, he was often separated from his siblings and at the whim of the system.

“We learned to be grateful and thankful for every meal that was put on a table,” he said. “We learned early on to value friendship and value the importance of things that we got because we didn't actually have much.” 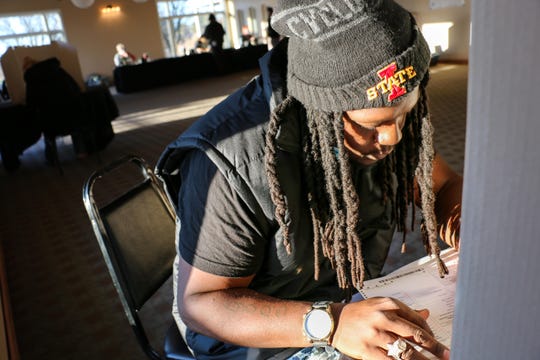 Dumped out of the system at 18 without a safety net, Ellis fell into a bad crowd when he moved to Iowa in 2006. He was, quite frankly, “beguiled by them,” he tells me.

Ellis spent four years in and out of prison for forgery and harassment. Parole violations extended his time.

But while inside, Ellis took advantage of the programs available: He got his high school diploma, a forklift license, a CPR license and a financial competency certificate.

Although he’s quick to say the justice system is rife with injustices and that money spent on keeping people locked up could be better spent on community building and helping felons adjust to the outside, Ellis says prison was a positive in his life. He’s taken responsibility for his crimes, and even is grateful for those mistakes because the consequences set him on a path to maturity.

“It really helped me to develop into the man I know I could have been all along,” he said.

“That saying, ‘Everything happened for a reason,’ is really true,” he added. “Even though we did have a rough childhood growing up, we still learned that we could be loved, and we still realized that there's love out there for us.”

Just before 7 a.m., the early birds zipped around in golf carts, preparing to tee off at Des Moines’ Blank Golf Course, as Ellis and a dozen other voters gathered outside the clubhouse. Ellis, watching poll workers finish their set-up through the big picture windows, leaned over to tell me that this moment was “monumental.”

Ellis wasn’t engaged in politics at all before he went to prison. But inside, he watched the news regularly and read voraciously and met people who did the same. They had their own current events debate club, he said. 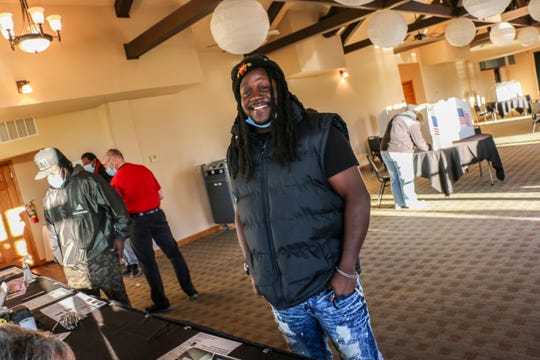 While locked up in 2015, Ellis watched news segments about new laws in Wyoming and Kentucky allowing felons to be re-enfranchised. Cellmates told him that wasn’t the case in Iowa. He’d lost that right unless he could get the governor to personally reverse his future, they said.

But all that changed with a few pen strokes this summer.

He had a new goal in his heart — voting — and he worked hard to ensure he was off parole by Nov. 3.

With his ballot scanned and counted, Ellis tells me he knows there are people who will always see him as what he did, as the person he was then. He can’t change that reality, but he hopes those people let their guards down, that they at least contemplate the possibility people can change.

“And we know what it feels like to be isolated and ostracized, and to be out there and not getting the proper help you need because of the mistakes that you made.”

Since getting out of prison a few years ago, Ellis landed a job at Holiday Inn, though he was laid off by the pandemic. He’s working on being a better father to his seven kids, four boys and three girls. He was thinking about them as he put that ballot in that machine, he says, and when they talk later, he’s anxious to tell them that he played a role in shaping their government.

Ellis hopes his future includes traveling and maybe even going back to school. He’s at least going to stay up on the news and continue reading and debating to ensure he makes the best use of his vote.

But for now, he’s celebrating a new favorite number: 41. 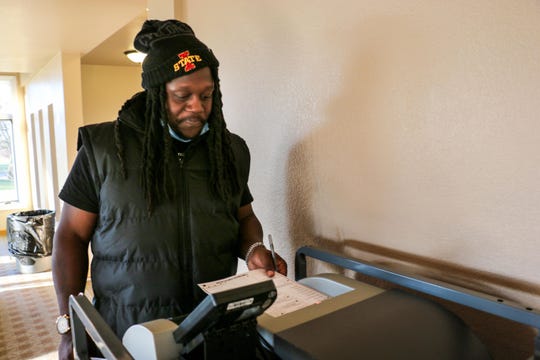