Iowa State Fair: The top 5 most iconic foods, based on your votes

Think you can guess the top 5? You might be surprised.

Iowa State Fair: The top 5 most iconic foods, based on your votes

There's buzz every year about the newest and the weirdest Iowa State Fair foods, but we wanted to shine a light on the classics. You know, the old standbys fairgoers come back for time and time again.

You voted, and here are the results (plus some takeaways and your write-in votes):

An unabashed combination of two things Iowans love — cheese and anything deep-fried — that's tough to argue with. Available in classic cheddar and garlic, this dish celebrates Iowa's rich dairy tradition.

If you're not feeling curd-y, you can also get your deep-fried cheese served on a stick. And if curds aren't quite enough to satisfy your cheese craving, you can always pick up some Berkshire Bacon Balls. 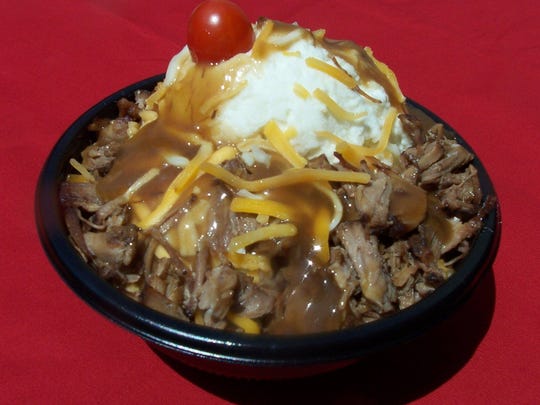 (Photo: Special to the Register)

Oh man, where to begin? Available only at the Cattleman's Association Beef Quarters, this dish promises a lot, and it delivers.

It's billed as "two scoops of hand-mashed, homestyle potatoes surrounded by slow-roasted, fork-tender roast beef topped with savory beef gravy, a sprinkling of shredded cheddar cheese and finished with a sweet red cherry tomato on top." (Whew, that's a lot of adjectives.) 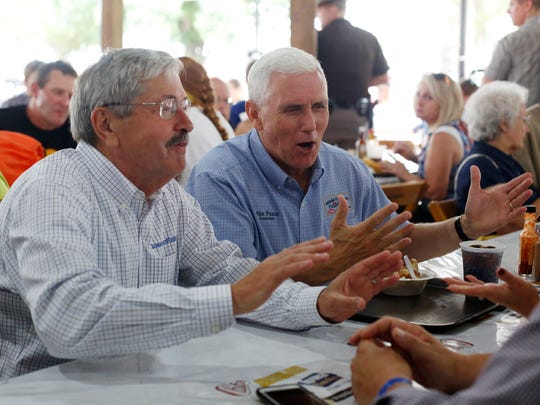 It's a dish filled with the kind of down-home traditional comfort food that reminds us of mom's cooking — and it was even a hit in 2016 with future Vice President Mike Pence.

Workers wrap up a finished Bauder's peppermint bar Wednesday, Aug. 2, 2017, as they get prepare hundreds of bars for the Iowa State Fair inside the ice cream kitchen at Bauder's in Des Moines. (Photo: Michael Zamora/The Register)

The anatomy of a Bauder's Peppermint Bar, for the uninitiated: Oreo cookies, peppermint ice cream, fudge sauce and even more cookies. It's a lot to take in, and there's no elegant way of attacking the delicious monstrosity. (If you end up with ice cream dripping down your face, you're doing it right.)

With “peppermint bars, it is like a cult following,” Bauder’s Ice Cream owner Kim Robertson told the Register in 2017.

The bar was first produced about 14 years ago when Bauder's looked to develop a product that could be passed to patrons quickly, like an ice cream sandwich. Peppermint ice cream was one of the shop's top sellers, and voila — the peppermint bar was born.

Bonus: You can buy peppermint bars, along with the ice cream shop's other delicacies, year-round at the Ingersoll Avenue location. 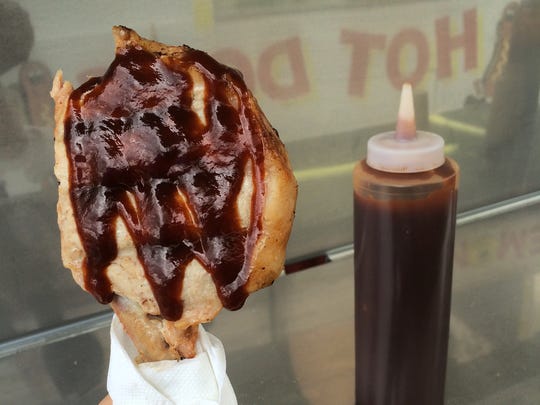 Is there any dish as etched into State Fair lore as the pork chop on a stick? It's portable — perfect for the walk up the hill to the Cultural Center or the MidAmerican Energy Stage — and, in a state that produces more pork than any other, it's distinctly Iowan. 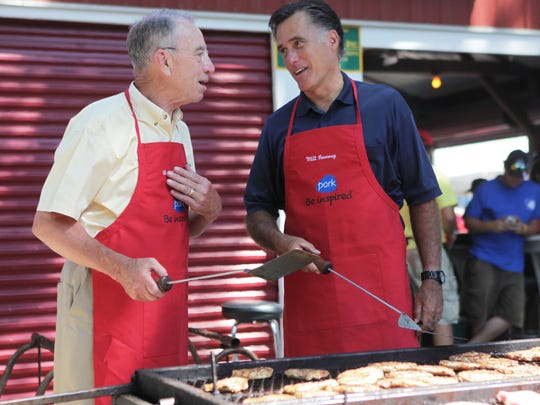 It's a perennial favorite with politicians visiting the State Fair, too, with many taking a turn on the grill at the Iowa Pork Tent, as U.S. Sen. Chuck Grassley and then-presidential candidate Mitt Romney did in 2011, or simply digging into one while visiting with pork producers, like Donald Trump did in 2015 before he became president.

Its appeal extends beyond the State Fair — one of RAGBRAI's most-loved vendors sold pork chops on a stick, too. Mr. Pork Chop Paul Bernhard died in 2016, but his legacy lives on each year: Paul retired from his hands-on role as a RAGBRAI vendor after the 2007 ride and passed on the tongs and spatula to his son, Matt Bernhard. 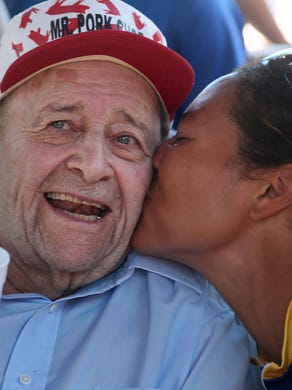 Paul Bernhard, aka Mr. Pork Chop, gets a kiss from RAGBRAI admirer Laura Goodon of Dallas, Texas, in his home town of Bancroft as the ride passes through Tuesday, July 22, 2014. Register file photo
Fullscreen 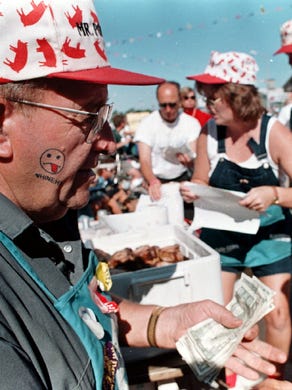 Mr. Pork Chop, Paul Bernhard, laughs as he looks at a cartoon drawn by RAGBRAI host Brian Duffy and presented to him during a ceremony in Jefferson on Monday, July 20, 2008. Register file photo
Fullscreen

Lance Armstrong stopped in Bancroft Tuesday, July 22, 2014 to personally thank Mr. Pork Chop, Paul Bernhard, for all of his work on RAGBRAI over the years. Register file photo
Fullscreen 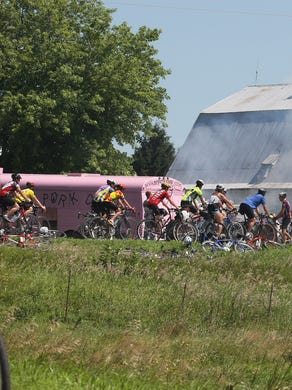 A corn dog makes its journey from the tray to an attendants hands at the annual Corn Dog Benefit Auction and Food Grazing Party on July 11, 2015 in the William C. Knapp Varied Industries Building at the State Fairgrounds in Des Moines, IA. (Photo: Brian Achenbach/For the Register)

Through your votes and comments on social media, it was clear that there's no food more synonymous with the Iowa State Fair than the corn dog.

Becky Baxter, left, and Kathy Eshelman both of Des Moines, work on corn dogs during the 13th annual Corndog Kickoff in the Varied Industries Building at the the fairgrounds in 2008. They made and passed out 1,400 corn dogs. (Photo: Register file photo)

It's even the namesake of the fair's annual Blue Ribbon Foundation annual fundraiser and auction: The Corndog Kickoff.

More than a quarter of you said you can't do the State Fair without grabbing this iconic food on a stick, which is available at no fewer than 10 locations across the fairgrounds. 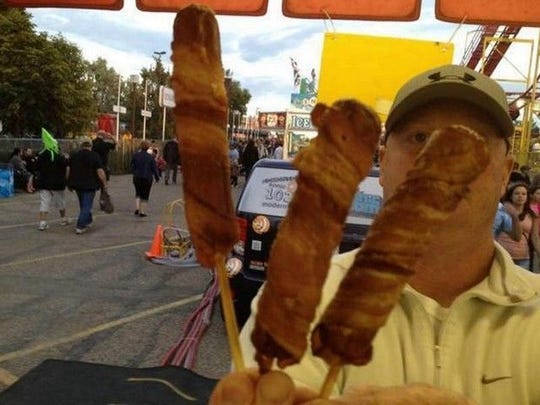 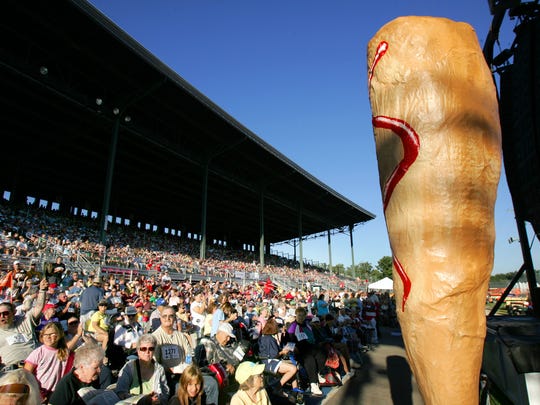 A giant corn dog stands in front of a packed grandstand for the Corn Dog Chomp at the Iowa State Fair on Aug. 7, 2008. (Photo: Register file photo)

In 2008, novelty foods were going strong at the Iowa State Fair, so much so that more than 11,000 fairgoers packed the Grandstand to set a world record for the number of people simultaneously eating a corn dog.

They're a favorite of visiting politicians, too, as then-Texas Gov. Rick Perry, among other 2012 presidential hopefuls, showed us in 2011. The only item receiving exactly zero votes was the chili dog, which at least one of our readers lauded in a tweet during the submission period.

Among the items receiving one lowly vote each were the Fair Square, deep-fried candy bar, Grater Taters and caramel corn.

Despite having 20 options to choose from, 5.6 percent of voters chose the write-in option. Among your favorite foods that we omitted from the poll were: