Husband and wife Aiden and Tammi DeLathower of Davenport talk about how the dynamics changed as they went from a lesbian couple to a male/female relationship after Aiden's transition from female to male.

Polk County District Judge David Porter on Thursday ruled that the lawsuit filed on behalf of two transgender Iowans – Mika Covington of central Iowa and Aiden Vasquez of southeast Iowa – and the LGBTQ advocacy group One Iowa could not continue because it is too early for courts to assess the validity of the law.

The plaintiffs had sought to temporarily block and eventually strike down legislation passed in April that allows government entities to opt out of using public insurance money, including Medicaid, to pay for transition-related surgeries. 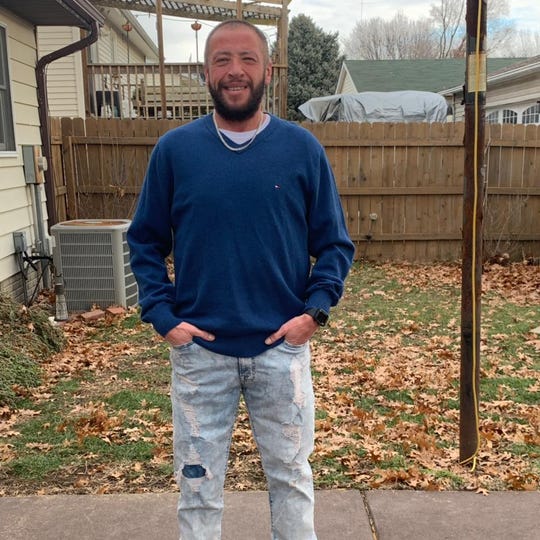 Aiden Vasquez was part of a lawsuit that sought to temporarily block or shut down legislation that Iowa lawmakers passed in April that allowed government entities to opt out of using public insurance to pay for transition-related surgeries. (Photo: Special to the Register)

Porter wrote that Covington and Vazquez need to exhaust their options for assistance through the Iowa Department of Human Services and show how the law actually will harm them before the judicial system can step in.

Porter wrote that, while the petitioners did detail "the stress their gender dysphoria has caused them historically," their "distress is not tantamount to irreparable harm."

"At this point, the contentions between the parties are purely abstract," the ruling said.

Porter also questioned whether One Iowa had legal standing to help bring the lawsuit.

"No one, including transgender Iowans, should be denied the medical care they need," Daniel Hoffman-Zinnel, executive director of One Iowa, said in a statement Thursday. "Being denied this medically necessary care puts the health and lives of transgender Iowans who rely on Medicaid at risk, including increased risk of depression, anxiety, and suicidal thoughts for transgender individuals who can't access the care their doctors prescribe."

Porter wrote that the ACLU's arguments were compelling, and that it's clear Covington and Vazquez suffer from gender dysphoria. But medical professionals did not demonstrate a dire need for treatment or any irreparable harm that could come from the lack of immediate treatment.

"We are pleased that the district court followed the rule of law and dismissed this lawsuit, allowing the state to implement this narrow provision clarifying that Iowa’s Civil Rights Act does not require taxpayer dollars to pay for sex reassignment and other similar surgeries, which has been the state’s position for years,"  Pat Garrett, spokesman for Gov. Kim Reynolds, said Thursday.

At a hearing last week, Porter heard arguments that the law passed this spring is both discriminatory against and betrayed animosity toward transgender individuals.

Assistant Iowa Attorney General Thomas Ogden argued that the challenged provision doesn't bar individuals from surgery or prohibit the government from permitting public money to be spent on it.

The law was passed after the Iowa Supreme Court in March ruled that a different ban on using Medicaid funds for transition-related care violated the Iowa Civil Rights Act. The new legislation, in turn, amended the Civil Rights Act.

The lawsuit that was tossed Thursday asserted that the new Medicaid provision runs afoul of the Iowa Constitution. The state Supreme Court did not address that question in its March ruling.

FacebookTwitterGoogle+LinkedIn
The day in pictures
Fullscreen