The dispute over House Study Bill 592 appears to focus mostly on whether professional sports leagues would be guaranteed a slice of the profits for a so-called "integrity fee" rather than whether wagering on sports should be legalized.

Wes Ehrecke, president of the Iowa Gaming Association, talks about plans to introduce a bill in the Iowa Legislature that would allow Iowans to legally bet on sports events if the U.S. Supreme Court rules favorably in a pending case. 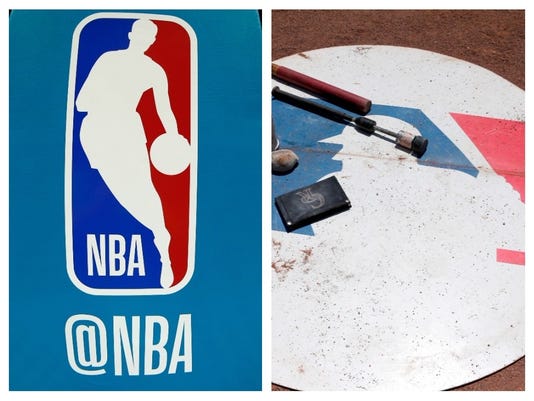 The National Basketball Association and Major League Baseball have officially registered against an Iowa House bill aimed at legalizing sports betting in the event the U.S. Supreme Court strikes down a federal law that bans it in most states.(Photo: File images from USA TODAY Sports)

The National Basketball Association and Major League Baseball have officially registered against an Iowa House bill aimed at legalizing sports betting in the event the U.S. Supreme Court strikes down a federal law that bans it in most states.

But the dispute over House Study Bill 592 appears to focus on whether professional sports leagues would be guaranteed a slice of profits for a so-called "integrity fee," rather than whether Iowa wagering on sports should be legalized, said Wes Ehrecke, president of the Iowa Gaming Association, which represents the state's 19 commercial casinos.

"It would kill sports betting in any state," Ehrecke told the Des Moines Register.

The Iowa sports gambling legislation, scheduled for consideration Wednesday before an Iowa House subcommittee, establishes a framework to legalize betting on college and professional sports that would be regulated by the Iowa Racing and Gaming Commission. Gamblers would place bets through sports books established at Iowa's casinos, either by visiting the casino or through online casino accounts.

In statements to the Register, representatives of both the NBA and MLB suggested the proposed Iowa legislation falls short of what's needed to protect the integrity of sports betting. Neither specifically mentioned the 1 percent fee, although it's part of model state legislation proposed by the NBA.

“We support legislation that includes comprehensive protections for the integrity of our sport. We look forward to working with legislators in Iowa and elsewhere to ensure that sports betting laws include these protections," said NBA spokesman Mike Bass.

In testimony before a New York State Senate committee on Jan. 24, Dan Spillane, a senior vice president of the NBA, proposed a comprehensive model bill for sports betting that would require sports books to pay each league 1 percent of the total amount bet on its games.

If sports betting becomes legal in New York and other states, sports leagues will need to invest more in compliance and enforcement, including bet monitoring, investigations and education, Spillane added. He said this approach draws from how sports betting is legally regulated in some other countries, including France and Australia.

Ehrecke said the 1 percent fee on the total amount of money gambled wouldn't generate enough profits for legal sports betting to be sustainable for Iowa's casinos. That's because for every $1,000 wagered, about 95 percent would be returned to gamblers, while the remaining 5 percent would be needed to pay state and federal taxes, overhead expenses and a small share of profits for casinos and community groups, he said.

The 1 percent fee sought by sports leagues on the gross amount of money bet by gamblers would effectively take 20 percent of what's left after winnings are paid out, Ehrecke added.

He said the Iowa Racing and Gaming Commission, which has overseen gambling in Iowa since the 1980s, has a proven track record of maintaining the integrity of wagering at casinos and racetracks.

"It is unfortunate there wouldn't be a good partnership with all the leagues, because they will benefit from people watching games and betting on games," Ehrecke said. "But there certainly doesn't need to be an integrity fee."

Nelson Rose, an emeritus professor at Whittier Law School in Costa Mesa, California, and a longtime scholar on gambling law, said in a column published in January that there are at least a dozen states that appear ready to enact new laws to introduce or expand legal wagering on sports events if the Supreme Court strikes down the federal law on sports betting as unconstitutional.

"This raises, as always, the question of who will get the money," Rose said.

Rose's analysis of an Indiana bill that would provide a 1 percent integrity fee to sports leagues, in addition to state and federal taxes, raises questions about whether the fee would be a good idea for sportsbook operators. He noted that out of any remaining revenue, the operator would need to pay all other expenses and taxes.

"I, personally, would never invest a cent into a business like this," Rose concluded.

Geoff Freeman, president and chief executive officer of the American Gaming Association, praised the Indiana legislation in a statement last month for proposing legal and transparent sports betting to Indiana. But he said that handing the sports leagues 20 percent of what's left after winnings have been paid out would undercut its economic viability.

"Doing so will ensure the illegal market continues to thrive in the state and gut the tax revenues available to fund essential services," Freeman said.