"It's a nightmare, an absolute nightmare," Iowa Poll participant says of mental health system, which draws disapproval from 64 percent of Iowans.

More than half of Iowans also disapprove of how state leaders are handling the Medicaid health-care program, K-12 and higher education funding, and taxes, the poll shows.

And a large majority of Iowans expect those issues to be major considerations when they vote next fall, the poll says.

Tina Kramer of Solon is among the 64 percent of Iowans who are dissatisfied with how state leaders are handling mental health care. She has seen the situation firsthand. "It's a nightmare, an absolute nightmare," she said.

Kramer struggled earlier this year to find appropriate treatment for her mother, who lives in a small town in northern Iowa and has a mental illness that causes delusions. It took several days to find a spot in a hospital with a psychiatric unit, Kramer said. It took even longer to find a nursing home that would take Kramer’s mother once she was stabilized in the hospital.

“I’ve had my eyes opened wide about how much of a crisis this really is,” said Kramer, 42, a political independent who works as a teacher.

Poll participant William Wheatcraft, 37, of Sioux City is among the 25 percent of Iowans who generally approve of how state leaders are handling the mental health system. He said the situation appears to be getting better. “There’s been more attention brought to it, I think,” he said.

Wheatcraft, who works as a truck driver, is a Republican. He’s not a fan of having the government running health-care programs, including for mental health. “Under most governments, things aren’t handled very well,” he said.

Iowa’s mental health system has been in flux for several years. Former Gov. Terry Branstad closed two of Iowa’s four state mental hospitals in 2015. Branstad noted that the facilities’ patient load had shrunk significantly, and he contended the state hospitals’ services could be better provided by private agencies. Critics said the state facilities still provided important services, and they say the loss is still being felt in southern Iowa.

More Iowa Poll coverage: Most approve of job Reynolds is doing, but nearly half want another governor

Iowa also has recently shifted to a 14-region system of overseeing many mental health services, after decades of having each county oversee those services. Proponents of the shift, including Gov. Kim Reynolds, say it is allowing more efficient and fair distribution of mental health services, including efforts to keep people from becoming so ill they need hospitalization or wind up in jail. Critics contend Iowa still has too few resources, including hospital beds and crisis centers for people suffering problems such as psychoses or deep depression.

The Iowa Poll, conducted by Selzer and Co. of Des Moines, questioned 802 Iowa adults Dec. 3-6 and has a margin of error of plus or minus 3.5 percentage points. 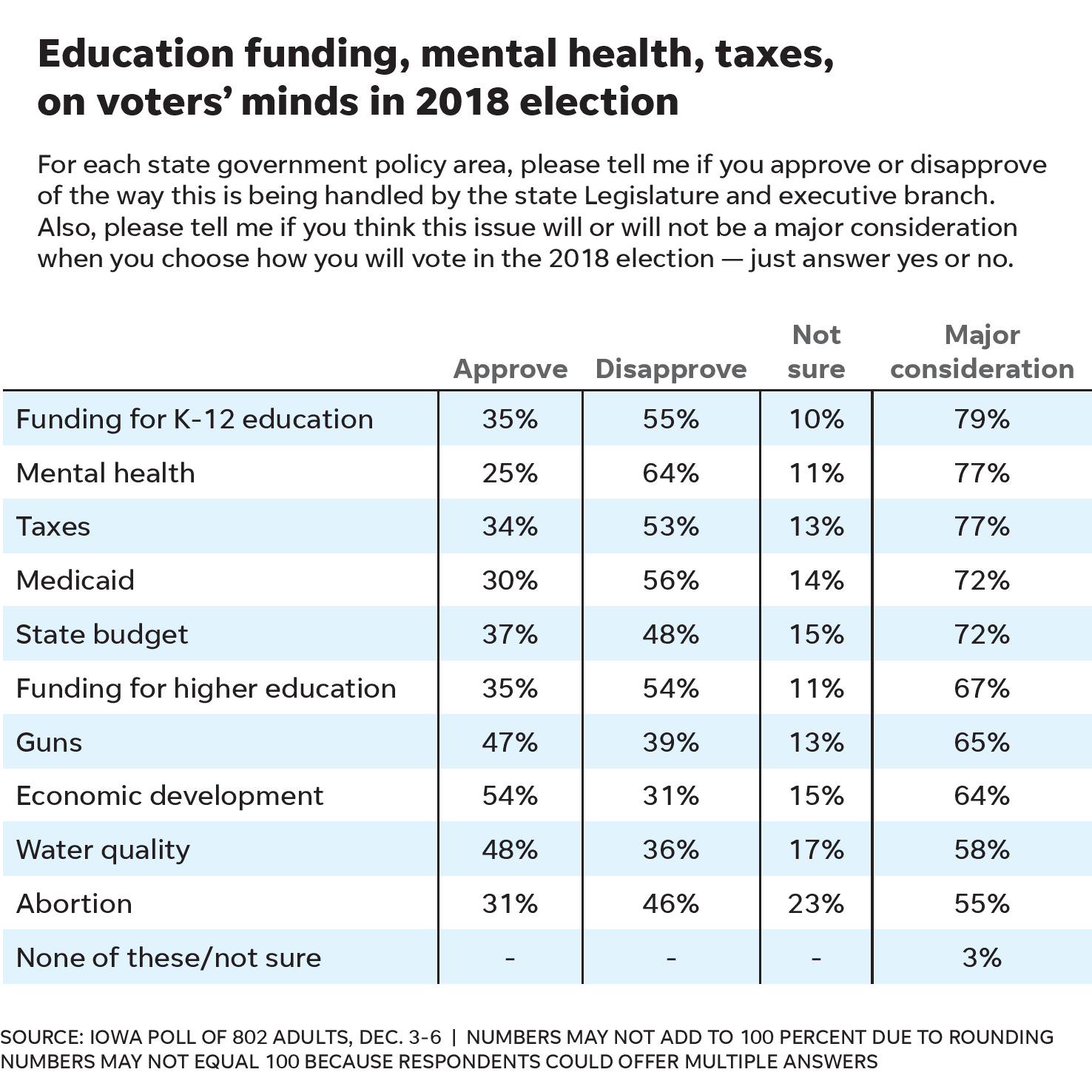 A prominent advocate for improved mental health services said she was heartened to hear that most Iowans are concerned about how state leaders are handling the situation. Peggy Huppert, executive director of the Iowa chapter of the National Alliance on Mental Illness, noted the state is in a budget crunch, which could lead to cuts in many programs. But legislators asked her and other experts to give them a list of recommended changes to the mental health system, which the advisory group recently did. Among the recommendations were stronger services for people in mental crises.

“There’s going to be a price tag to go with that,” Huppert said. “The politicians are going to have some choices to make.”

The Iowa Poll's results could help the recommendations gain traction at the Statehouse, Huppert said.

The state’s handling of Medicaid also has been a controversy magnet. Branstad hired three private management companies in 2016 to run the $4 billion program for about 600,000 poor and disabled Iowans. Branstad and his successor, Reynolds, say the switch is saving the state tens of millions of dollars through more efficient, effective care.

Critics have lambasted the shift, saying it has led to cuts in services to disabled Iowans and created reams of red tape and late payments to agencies caring for them.

The situation became even more controversial this fall, when one of the three companies pulled out of Iowa because of a contract dispute with state officials, and a second one said it couldn’t take on any new members. That left most Iowa Medicaid members with just one choice of management company, UnitedHealthcare, despite promises that the system would provide them with several choices.

Iowa Poll participant Barb Sharp, 69, of Johnston said privatizing Medicaid has turned out to be even worse than she feared.

“I don’t think it has gained anything for the people using that program,” Sharp said. “I don’t think the out-of-state, for-profit companies have empathy for people with disabilities.”

Sharp, who is a retired nurse and a Democrat, said she wants the state to resume direct oversight of Medicaid. She expects the controversy to be a major issue in the 2018 governor’s race.

Poll participant Clayton Lane, 72, of Princeton thinks the state should give the privately run Medicaid program more time to work.

Lane, who is a political independent and a disabled veteran, has faith in Reynolds as governor and believes she knows what she’s talking about on Medicaid. But Lane thinks state leaders should do a better job of helping Iowans understand how the new Medicaid system works. He also wants officials to maintain close oversight of the companies hired to administer it — “just to make sure everything’s being done according to Hoyle,” he said.

The new poll shows that fewer than half of Iowans approve of how the Legislature is handling its job in general. Forty-five percent approve, 35 percent disapprove and 20 percent are unsure.

The Iowa Poll, conducted December 3-6 for The Des Moines Register and Mediacom by Selzer & Co. of Des Moines, is based on telephone interviews with 802 Iowans ages 18 or older. Interviewers with Quantel Research contacted households with randomly selected landline and cell phone numbers supplied by Survey Sampling International. Interviews were administered in English. Responses were adjusted by age and sex to reflect the general population based on recent census data.

Questions based on the sample of 802 Iowa adults have a maximum margin of error of plus or minus 3.5 percentage points. This means that if this survey were repeated using the same questions and the same methodology, 19 times out of 20, the findings would not vary from the true population value by more than plus or minus 3.5 percentage points. Results based on smaller samples of respondents — such as by gender or age— have a larger margin of error.

Republishing the copyright Iowa Poll without credit to The Des Moines Register and Mediacom is prohibited.

IOWA POLL by dmronline on Scribd