73% of Iowans see mental-health system as in crisis or as a big problem, new Iowa Poll shows.

Sergei Neubauer, left, with his parents, Larry Loss and Mary Neubauer.(Photo: Special to the Register)

Nearly three-quarters of Iowans believe the state’s mental-health system is in crisis or is a big problem, a new Des Moines Register/Mediacom Iowa Poll shows.

The mental-health system is by far the leading area of concern for Iowans among nine possibilities tested, according to the poll. Thirty-five percent of Iowans say the lack of mental-health services is a crisis, and 38 percent believe it's a big problem.

The poll's findings come as state leaders roll out an ambitious plan to expand mental-health services, including the addition of "access centers" for people who need immediate help. The current system's flaws have been highlighted by high-profile tragedies, including the September suicide of Clive teen Sergei Neubauer.

The poll finds that child-welfare services also are a major concern: 20 percent of Iowans see those services as being in crisis, and 38 percent see them as a big problem.

“People aren’t just falling through the cracks — these are canyons,” said Schagt, a registered nurse from Audubon who has worked in mental-health care.

Schagt, 30, is a political independent who worries about severe shortages in mental-health facilities, care professionals and insurance coverage. She also sees serious flaws in the child-welfare system, including insufficient training and growing caseloads for the state social workers who are supposed to keep track of kids who might be having trouble. “They just can’t do it,” she said.

When considering the child-welfare system, the public focuses on a few dramatic abuse cases, Schagt said. Two examples: the starvation deaths of central Iowa teens Natalie Finn and Sabrina Ray in the past two years.

But many more children quietly suffer years of neglect or less extreme abuse, she said. Such mistreatment often leads to mental-health problems, including depression, eating disorders and even suicide, she said. “It’s a domino effect.”

The poll, conducted by Selzer and Co. of Des Moines, questioned 801 Iowa adults Jan. 28-31 and has a margin of error of plus or minus 3.5 percentage points.

Like Schagt, poll participant John Long, 50, of Sidney sees Iowa's mental-health system as being in crisis. He said he’s been troubled by stories from across the country about people with untreated mental-health problems, including some who went on to commit mass shootings. Some of those people reportedly were treated when they were young, “but then they slipped through the cracks,” he said. Long said many other Americans have untreated mental-health problems that don't lead to violence, but keep them from participating in society, including by working.

Long, a Republican who works as an agronomist, said he’s noticed there are many more resources for physical-health problems than for mental-health ones. That’s likely because of a shortage of money and because of continuing stigma surrounding the subject, he said. “Nobody wants to be labeled with mental-health issues,” he said. He added that he didn’t like the way the state abruptly shuttered two mental hospitals in 2015, including the one in Clarinda, which is near him in southwest Iowa.

Such concerns have caught state leaders’ attention. Candidates for top offices are talking about the problem, and state human-services leaders recently proposed a list of expanded mental-health services. The plan, which is backed by Republican Gov. Kim Reynolds, would add “access centers” around the state for people who need help with mental crises but aren’t sick enough to require treatment in perennially crowded psychiatric hospital units. The proposal also would add residential treatment programs for Iowans with serious mental illness, and it would double the number of “assertive community treatment” teams to help people with less severe chronic problems stay stable.

Many of Iowa’s mental-health services are financed with a combination of county property-tax money and Medicaid payments, which come from the state and federal governments. The proposal to expand services would ask the counties to cover many start-up costs with property taxes they funnel through 14 regional mental-health authorities. State leaders promise that many new services would then be covered by Medicaid, which pays for health care for about 600,000 poor or disabled Iowans.

Iowa Department of Human Services Director Jerry Foxhoven outlined the proposal during a recent meeting of county supervisors from throughout the state. In his presentation, Foxhoven pushed back on some criticism of Iowa’s current mental-health system.

A leading advocate for improved mental-health services applauded the proposed changes, which she attributed to increased public discussion of the issue. “It’s reached a tipping point, because so many people are affected, and they’re sharing their stories,” said Peggy Huppert, executive director of the Iowa chapter of the National Alliance on Mental Illness. “People are feeling emboldened and empowered.”

People with mental illness still face stigma, but not as much as in the past, Huppert said. The past few years have seen a dramatic increase in families talking openly about their struggles, including suicides by family members who were unable to obtain sufficient treatment. Such testimonies drive public opinion, which is reflected in the new Iowa Poll, she said.

Partisan differences also are evident in views on other issues. With Republicans controlling the Legislature and governor’s office, Iowa Democrats are more likely to see crises in many areas affected by state policy. 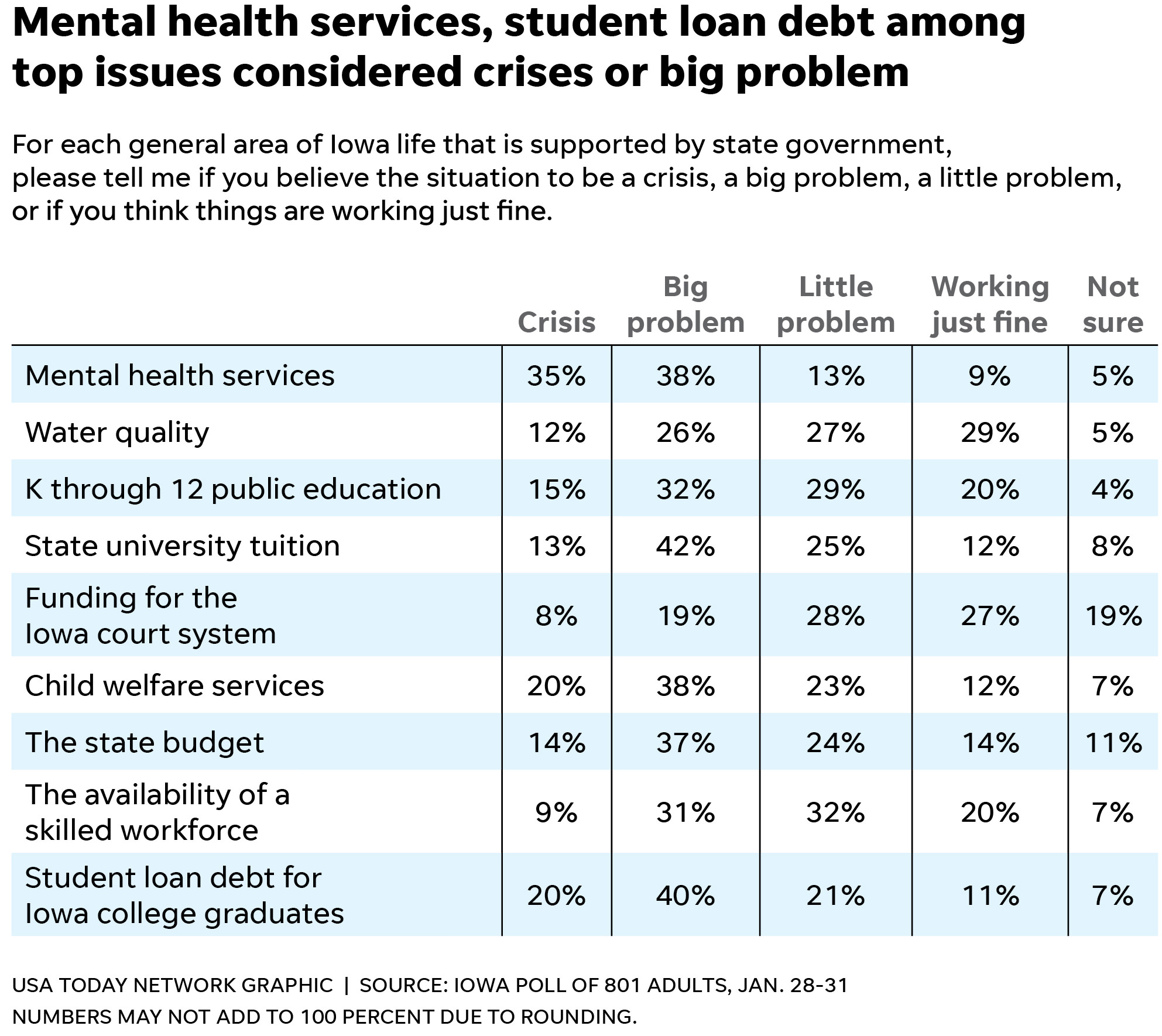 In addition to the mental-health and child-welfare systems, a majority of Iowans see three other areas as being in crisis or a big problem: student loan debt for Iowa college graduates, 60 percent; state university tuition, 55 percent; and the state budget, 51 percent.

The Iowa Poll, conducted Jan. 28-31 for the Des Moines Register and Mediacom by Selzer & Co. of Des Moines, is based on telephone interviews with 801 Iowans ages 18 or older. Interviewers with Quantel Research contacted households with randomly selected landline and cell phone numbers supplied by Survey Sampling International. Interviews were administered in English. Responses were adjusted by age and sex to reflect the general population based on recent census data.

Questions based on the sample of 801 Iowa adults have a maximum margin of error of plus or minus 3.5 percentage points. This means that if this survey were repeated using the same questions and the same methodology, 19 times out of 20, the findings would not vary from the true population value by more than plus or minus 3.5 percentage points. Results based on smaller samples of respondents — such as by gender or age — have a larger margin of error.

Republishing the copyright Iowa Poll without credit to the Des Moines Register and Mediacom is prohibited.