Google's Nest Hub Max is bigger, pricier and you can make calls

Google's Nest Hub Max is bigger, pricier and you can make calls

MANHATTAN BEACH, Calif. – A year ago, we were so impressed with what was then called the Google Home Hub, we called it one of the top 10 best tech products of 2018, with one caveat. We wished it could be bigger.

The old Home Hub is now called the Nest Hub, and the larger, new version is the Nest Hub Max. (To keep it in the Nest family, the brand best known for a digital thermostat that's owned by Google.) But just to drive you crazy, Google still calls the original speaker designed to take on Amazon's Alexa as Google Home.

And you can't set up the Nest Hubs without first either downloading or updating the app known as Google Home. 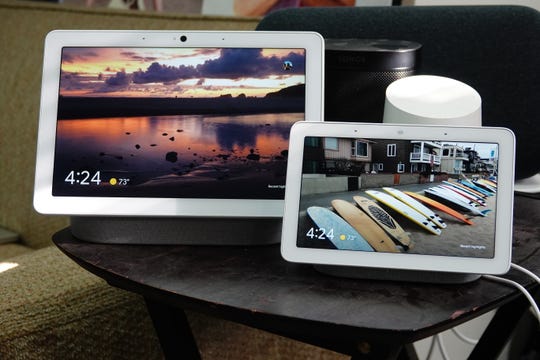 The new Google Nest Hub Max, with a ten-inch screen, back to back with the old Nest Hub, with a 7-inch screen. (Photo: Jefferson Graham)

A different way: Signing on with Apple could be safer than Facebook or Google

The reason we fell in love with the Hub was twofold: It was affordably priced and made one heck of a sweet digital photo frame and YouTube viewer. But sadly, a year later, Google's price advantage has been erased. And Google hasn't fixed some of the basic smart flaws in the Google Assistant.

The new version is only three inches larger, but that's in height and width, and the difference is striking. It isn't, but it feels almost twice the size when displayed back to back. And that's a good thing. The old one seems so small and antiquated now.

How they stack up

Amazon's Echo Show, also a 10-inch video viewer, but one who answers to Alexa, is also $229, but the e-tailer historically discounts very heavily and is expected to introduce a new version soon. Facebook's Portal, again a 10-inch viewer, is $179, and the company is announcing a re-modeled version today with bigger photos and the ability to make phone calls to users of Facebook Messenger or WhatsApp. (Google discounted the Hub significantly last holiday season as well.)

Many consumers feel sketchy about having a Facebook device with a built-in camera in their home, so Google did have a clear advantage in selling a camera-free device in the Home Hub.

Except now the new Hub has a built-in camera that looks and resembles the Facebook camera. In my review of the Portal, I said I was creeped out by the idea of having a Facebook monitor in my home but that the video calling was as good as it gets. The camera was (and is) a tech wonder, in that it could follow you around as you moved in and out of the room. You weren't forced to have a boring static call.

Google basically cloned the camera technology for the Max, but creepiness aside, Facebook wins here big time. How many people do you know who use Facebook? Now, how many folks are you connected to via Google's Duo voice chat app?

So yes, the Google camera, if you're willing to have it on, is terrific, but to do two-way video calls with other people, they'll have to download the Duo app.

The Duo app is so little used, it doesn't even show up in the Google Play Store top 100 app downloads chart. (Messenger is No. 2.) On Apple's iOS, where it's also available, it currently ranks as No. 71, to Messenger's No. 7.

And Google isn't squeaky clean when it comes to privacy either, known for playing semantics with consumers to get them to change their Maps settings (in exchange for new features) to allow Google to follow us everywhere we go, even if its apps are closed and turned off, so that Google can use us for targeted advertising.

Check your settings: If you don't want Google tracking every move

They offer the usual privacy speech about how the camera won't track you, and if you're uncomfortable with it, you can always turn it off.

The irony is that Google is now selling the Hub as a video calling device first – as if I really need to see friends and relatives at 10 inches instead of 7 inches, which is plenty big.

For videos and YouTube, a 10-inch screen is fantastic. Everything looks better, crisper and brighter with more colors, and we love watching our photo libraries fly by from Google Photos. That alone is frankly worth the $229, or however much the unit is discounted to in the coming weeks.

But sadly, the Google Assistant hasn't gotten any smarter in a year. So many commands, even after all these years of trial and error, resulted in "I don't know how to help with that yet," playing the incorrect songs (based on what I asked for clearly) on YouTube Music or not being able to perform the simplest of YouTube requests.

A year ago, I complained that the Hub couldn't play the monologue's of the late-night comics on YouTube, despite their being some of the most popular clips shown on the service. And 12 months later, nothing's changed. The Assistant still either says it doesn't know how to do it or plays some random song on YouTube Music instead.

"(Update: After this article published, Google alerted us to say that the comedy clips would indeed play, if you said, "Hey Google, play Stephen Colbert's monologue (or Jimmy Fallon, etc.)", terms we had used (among others) when we tested the device. We tried again Wednesday, and yes, it worked, initially, for Colbert. For Jimmy Kimmel, it didn't offer the monologue, and instead played a clip of the comedian interviewing presidential candidate Cory Booker. For Fallon, it displayed, instead of played, several Fallon clips. When we asked it to play the first selection, it offered instead a music playlist from YouTube called :"Country's Class of 18.")

Meanwhile, I've had an Echo Show plugged in for the last several months, and despite the Google Assistant winning most surveys as the smartest of the assistant, Alexa has been flawless in my daily commands. The Show, at least last year's model, has superior sound to the tinny speaker on the Hub Max, which surprisingly didn't get much of an upgrade with the higher price.

The Echo Show, minus a workaround, can't play YouTube, so your video content is limited unless you want to use it to see movies and TV shows from Amazon Prime Video. Amazon's Photos app, though, can't display photos from my Google collection.

(Making calls with the Show isn't a walk in the park either. Both parties have to either have a Show, or the Alexa app on a smartphone or tablet, and be comfortable using it for voice calls.)

For now, consumers, I would wait before buying to see what the new Echo Show update will be like. Amazon is staging a product reveal of its holiday lineup Wednesday, and USA TODAY will be covering. We'll be back with a full report after taking in-depth looks at the new Portal and Echo Show devices.